I spend a lot of time on the New York City subways, so it came as no surprise to me when the Metropolitan Transportation Authority (MTA) recently released a report stating that 20% of subways arrive late to their stations and the total number of delays in 2014 increased 25.6%  from the previous year. I was also not surprised to note that the train I take every day, the esteemed number 5 train, had the highest percentage of late arrivals: 33%. That is the reason I am late one out of every three days when taking my children to school.

There are some wonderful things about public transit. You can read, you can spy on what other people are reading, you don’t have to drive. But as I stand on yet another subway platform during rush hour, wondering if the ticker is telling the truth when it says the next train will arrive in twenty-two minutes, I think the subways could be so much more.

Last month Book Riot contributor Rachel Cordasco wrote about her dream bookstore. Today I bring you my bookish dream for the subways. Because when you’re on a platform waiting for a train that has a one in three chance of being late, or if you’re squished with your children inside a subway that is stalled indefinitely due to a police investigation fifteen stations away, at least you can read something amazing while you’re there.

1. Little Free Libraries in all subway stations and next to MetroCard vending machines. This would take some work from a team of people who love books, or a local business, school, or block association could adopt and maintain a Little Library at their neighborhood subway station. I think subway riders would rejoice at the opportunity to read books while they’re waiting for their late train. The perfect place to put them? In place of the I’m-scared-to-touch-this-what-is-growing-on-it pay phones, and next to all MetroCard vending machines.

2. Add more Poetry in Motion. The Poetry in Motion program in New York City puts posters with poems in subway cars where a poorly written advertisement would otherwise be. Although the MTA website states that the poems (and accompanying artwork) are changed every quarter, I feel like I’ve see the same three poems for the last two years. MTA, if you’re reading this, please put new poems into the rotation and put them in more subway cars. (Preferably every subway car, thank you.)

3. Create sidewalk plaques similar to Library Way on East 41st Street near Fifth Avenue and install them on subway stairwells. I think reading a little Langston Hughes would inspire the most cynical New Yorker. 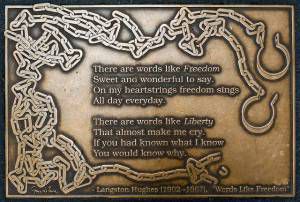 4. Bookmark dispensers on the wall in the middle of the train. Not only will this encourage people to move to the middle and stop blocking the subway doors so people can actually enter and exit the train (this might be a pet peeve of mine), but who doesn’t love a free bookmark? (Please tell me the bookmark fetish isn’t just me.)

6. Add the locations of libraries and indie bookstores onto the subway map. When your train goes out of service and no one can tell you when it’s going back into service, you can at least soothe your annoyed soul with Jacqueline Woodson’s Brown Girl Dreaming or Nova Ren Suma’s The Walls Around Us by heading over to the nearest library or bookstore where the subway has abandoned you.

7. Completely revamp subway advertisements. I don’t know about you, but a little bit of poetry or lyrical language would totally get me on board for whatever you’re selling.

9. Children’s book illustrations on everything. I’m thinking mosaics on station walls, posters plastered on trash cans, and book images on the station emergency doors so kids can look at something when their parents wait in line to ask the station attendant to open the gate for their stroller. If I walked into a subway station and saw illustrations from Marla Frazee’s All the World, Julie Fogliano and Erin E. Stead’s And Then It’s Spring, Dan Santat’s The Adventures of Beekle: An Unimaginary Friend, or Oliver Jeffer’s This Moose Belongs to Me, my hope in humankind would be restored forever. 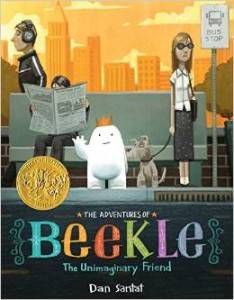 Beekle has to wait for public transportation too.

10. Add book quotes to the end of all subway announcements. Really, what would be better than this announcement: “Courtesy counts. Offer your seat to an elderly, disabled, or pregnant person. And now, a quote from Anna Funder’s book, Stasiland: Stories from Behind the Berlin Wall: I like trains. I like their rhythm, and I like the freedom of being suspended between two places, all anxieties of purpose taken care of: for this moment I know where I am going.”

What are your bookish dreams for your public transit system?