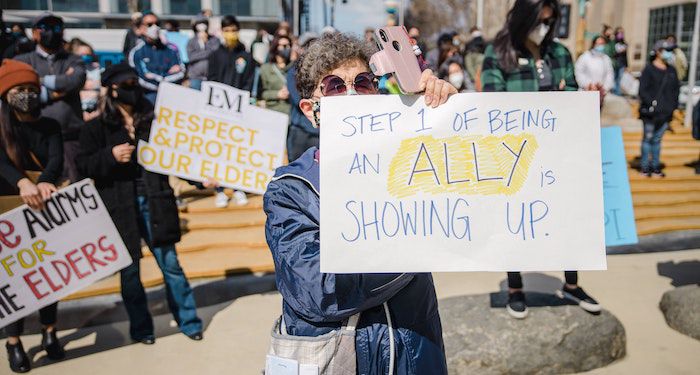 Years ago, I read a book called Virtual Equality: The Mainstreaming of Gay and Lesbian Liberation by Urvashi Vaid. It was written in 1995, but I was surprised (and disturbed) by how much was still relevant today. One of the things that really stuck with me, though, was Vaid’s description of how effective messaging and education is on the political right, especially the Christian right. Messaging and talking points are passed down in a very organized way. (For example, kids attending Sunday schools.) This book argues that we don’t have anywhere near the same system on the political left, and that it results in two things: a fractured message (we can’t seem to agree on even the most basic of talking points) and rehashing the same conversations over and over.

As someone who has been in queer online spaces from Livejournal to Tumblr to TikTok, I can absolutely attest to that. It’s frustrating to see the same conversations circulate over and over, as if we haven’t moved forward at all. The “lesbian sex wars” are still raging. Bisexuals in M/F relationships are still often considered “straight” or “not queer enough.” We’re still arguing about BDSM, butch/femme relationships, who and what is allowed at Pride — arguments that have been going on for decades. What’s worse is that these discussions haven’t moved forward at all: it’s not as if we’re getting any more nuanced, and there’s no reference to previous iterations of these conversations.

I was reminded of this idea while watching Rowan Ellis’s The Problem With “Google is Free” Activism video. In it, she discusses how the knee-jerk reaction to questions made about social justice, especially seemingly basic ones, is “just google it.” Rowan goes into some detail about the nuances of this, including that marginalized groups shouldn’t have to educate for free on demand as well as how unreliable Google can be for these topics.

Of course, I couldn’t think about these topic without connecting it to books. In the bookish community, there has been a concerted effort to read more diversely and educate yourself about various social justice components through reading. (Of course, we still see pushback, but that has become the exception instead of the rule.) Whenever a horrific act of discrimination gets news coverage, you’re sure to see reading lists in its wake. We love to gather up the must-read titles so that you can know everything you need to know to be a good ally.

It’s great to educate yourself, of course: it’s definitely better than the alternative. On its own, though, just reading through those lists doesn’t mean much. It may be blasphemous to say as a book enthusiast, but reading is not in itself a revolutionary act. It doesn’t make change. It’s a solitary activity, and it can easily affect no one other than yourself.

It’s not that we shouldn’t educate ourselves as allies, but that is only the first step. Did you get a stack of antiracism reading during the 2020 Black Lives Matter protests? Did you read them? It’s not clear how many people did: sales of antiracism books skyrocketed, but it’s hard to know how many actually got read. If you did, though, and you’re not Black, what did you do with that information? How did you contribute to change? (I’m absolutely aiming these questions at myself as well, to be clear.)

Marginalized groups shouldn’t have to defend their humanity online to strangers. At the same time, though, I agree with Rowan Ellis that there is value in that education taking place. I propose that this is where allies come in. After you have educated yourself, it becomes your duty to educate others — from the clueless on Twitter to the people with antiracist books gathering dust, untouched, on their shelves.

This can be difficult, of course. We’re always told not to feed the trolls, and sealioning is common online. I don’t mean to say that you should fight every troll you encounter. Instead, I propose that if you are an ally and encounter a question you can answer sufficiently, answer it. You don’t have to engage after the fact, especially if it’s bad faith. You shouldn’t be speaking over people from that community. But when appropriate, having that information out there, especially if you include a link to reliable resources for more information, can help others get to where you are.

In my dream version of this, we have an organized group of online educators (with shared resources to link to) that can be called on when needed. After all, if 4chan and subreddits can organize hateful miseducation campaigns, why can’t there be a version for good? There are talking points for the alt-right and organized ways to try to lure people into white supremacy — why do we not have clear, step-by-step guides for educating people away from falling into these rabbit holes? (And if we do, why aren’t they more well-known and circulated?)

Reading books to educate yourself as an ally is great, but it should be considered just the first stepping stone. Once you have educated yourself, the next step is to educate others. It may be satisfying to tell someone to “just google it” and be righteous in knowing more than they do — but it doesn’t do much to move the needle. That requires patience and persistence, not smug superiority.