A few years ago, when I was traveling to my cousin’s wedding, I had a Thomas Hardy–themed weekend. I rented the excellent 2015 adaptation of Far from the Madding Crowd in my hotel room and later bought a copy of Tess of the D’Urbervilles at a used bookshop next to the wedding venue. I had an angry, cathartic emotional reaction to the use of the old folk song “Let No Man Steal Your Thyme” in the movie. Obviously, the word “thyme” is a play on time, but it’s also a metaphor for virginity. Therefore, “let no man steal your thyme” is a warning to avoid sexual predators, like a 19th century whisper network. 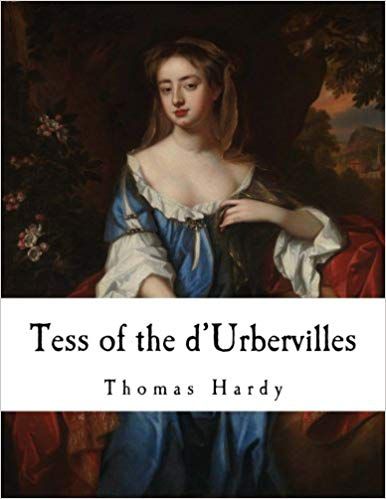 Tess immediately became one of my new favorite books. I don’t think I’ve ever related so much to a 19th century heroine, even Jane Eyre or Lizzie Bennet. Hardy’s compassion and grasp of his female protagonist’s psychology seems incredibly progressive for a male, Victorian novelist. I discovered this book when I needed it most, when I was still processing sexual assault.

Tess’s rapist, Alec, is predatory and dishonest, yet disarmingly handsome and dapper. He’s lecherous towards her right from the beginning. At their first meeting, he violates her personal boundaries, acts overly familiar with her, and forces strawberries into her mouth in a suggestive way. Tess intuitively distrusts him but ignores this because her family wants him to help them financially.

Tess laments that she “was doomed to be seen and coveted by the wrong man.” In terms of physical strength and cunning, Tess is no match for Alec. Some of his words came directly from my sexual abuser’s mouth, and probably many others. He assumes no means yes and says flippantly: “That’s what every woman says.” He always downplays the hurt his actions have caused.

I can’t believe that people still write essays pondering the question: “Was Tess raped or seduced?” Even though the rape is alluded to in a circumspect way that’s typical for Victorian novels, it’s the only interpretation that makes sense. She might have even been asleep, so there’s no possibility of consent.

At first, it appears that Alec and Tess are distant cousins. However, as the novel progresses, the reader finds out that Alec’s family usurped her family’s ancient, aristocratic D’Urberville name. He feels threatened by Tess and uncomfortable with the thought of her taking her true name. He knows that he’s an imposter, a fake D’Urberville, and she’s a real one. He’s never what he appears to be.

For a while after her rape, Tess is “in love with her own ruin.” To me, this sounded melodramatic, almost victim-blaming. However, in context, I think that Hardy is trying to describe trauma and all the flashbacks, shame, rumination, and depression that can come along with it, in an era that didn’t understand trauma in these terms. Also, Tess would have been considered “ruined” unless she could still get married. Even today, trauma survivors are told “not to let it define us,” which would have been impossible for Tess.

In Tess’s society, she would need the love and acceptance of a man to redeem her, and her husband, Angel Clare, is unable to give that to her. He’s the epitome of Victorian hypocrisy, particularly double standards for men and women. I knew he was bad news when he was still courting Tess but referred to her proudly as “my property.” I know he’s a product of his time, but this is creepy no matter what.

On their wedding night, before they can consummate the marriage, Angel confesses to her that he once had sex. He expects her to accept this, but when she “confesses” that she was raped, he cannot “forgive” her. Instead of being outraged that someone would violate Tess in this way, he’s more concerned that another man has “claimed” her before him. He reasons that Alec should be Tess’s lawful husband because he “deflowered” her and is still alive. In his own self-righteous way, Angel is almost as bad as Alec. It’s his betrayal that ultimately destroys Tess. In her excellent, 2017 essay for Literary Hub, Rachel Vorona Cote writes that Angel Clare has many modern-day counterparts among self-proclaimed feminists and “nice guys.” These are the people who use feminism as a cover to get women to trust them or who judge partners for their sexual histories.

Alec embodies the hypocrisy of the Victorian age in a much more carnal way than Angel. Tess runs into him years later and finds that he’s become a born-again preacher. Ironically, in their society, it’s easier for a rapist to be redeemed than for his victim. Alec merely has to say that he’s had a conversion experience, and the world accepts him. Tess lambasts the hypocrisy of men who ruin others’ lives with impunity and then conveniently “convert” when they become concerned with their own salvation. It’s possible to interpret this as an indictment not only of Victorian social mores but also of the Christian doctrine of redemption.

Instead of being a one-dimensional archetype, Alec manages to be a slightly morally ambiguous character. Perhaps his conversion experience was never sincere, and he was never contrite. Or possibly, his religious fervor, like his sexual passion, is intense but temporary. Ambiguity like this gives the novel its depth, elevating it above the typical, tragic Victorian morality tale.

The novel also engages with Britain’s mysterious, pagan past, contrasting it with more rigid Christian morality. Tess was probably one of the first novels to do so, and it would have been considered controversial at the time. I can see its clear influence in more recent novels. Hardy uses ancient mythological figures to symbolize an animalistic, amoral side of sexuality. Just a few pages before the rape, he describes dancers in a local pub as “satyrs clasping nymphs—a multiplicity of Pans whirling a multiplicity of Syrinxes; Lotis attempting to elude Priapus, and always failing.” If you get the classical references, this clearly foreshadows what is about to happen to Tess.

If you’ve ever wondered whether you were fated to meet your abusers, why they chose you, or if they’ve had more victims before and after you, reading Tess can be a cathartic, relatable experience. Ultimately, Alec is such a repellant and self-absorbed character that I realized that people like him didn’t deserve any more of my thoughts.