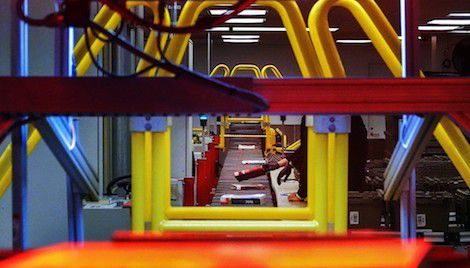 Every book is handpicked by a seasoned corps of 16 selectors and helpers who are the gatekeepers to the library’s circulating collection of nearly 5 million books, 1.7 million e-books and 177,000 audiobooks.

These selectors have, at minimum, a master’s degree in library science and a love of reading. They scour thousands of titles so borrowers don’t have to. From inside a squat, brick building in Long Island City, Queens, they are “fighting for good books,” said Michael Santangelo, the deputy director of collection management.

Collection development was my favorite part of being a librarian. Here’s how it happens at such a massive library system.

On March 26th, Doubleday Books releases the first graphic novel adaptation of The Handmaid’s Tale and below you can take a first peek inside the illustrated epic. Deadline’s exclusive excerpt is the first preview anywhere and it shows the spare, evocative artwork of Renée Nault, the Canadian artist hand-selected by Atwood to adapt her bookshelf classic.

Will you read the comic adaptation?

This is Serial Box’s first foray into tie-in fiction, and in a release, CEO Molly Barton says that they’re “thrilled that Marvel is entrusting us to extend and expand the story worlds for these beloved characters.” The stories will be originals based on the characters, but won’t be retellings from the comics or films. The first story out of the gate will be about Thor, and will land sometime this summer. The company says that Aaron Stewart-Ahn, Brian Keene, Jay Edidin, and Yoon Ha Lee will make up the writer’s room for this first serial. Serial Box wouldn’t say if its stories will fit together in its own connected-universe model, or if each season will stand alone.