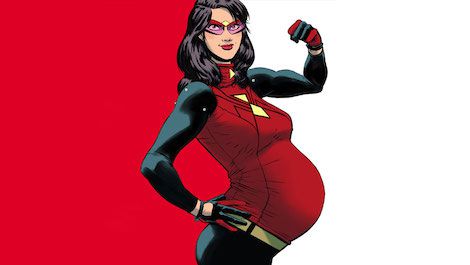 I’ve written about motherhood and comics before for Book Riot, but I’m not sure I can really convey just how important they’ve been. I’m gonna try, though. Bear with me here. After some sleuthing on Goodreads, I realized that I first started reading comics near the end of 2016, when my son was around 6 months old—and it seems that Bitch Planet was my gateway comic. Not surprising, since my fellow Rioters got me into comics. I didn’t really start reading comics in earnest until April or May of 2017, mostly to prepare for the Wonder Woman movie, but it was sort of an explosion, to be honest. I threw myself into various series, and found myself asking Rioters about motherhood in comics—namely, were there any superheroes who were mothers. Spider-Woman was suggested to me, and so I found myself reading Hopeless’s arc, Spider-Woman: Shifting Gears. 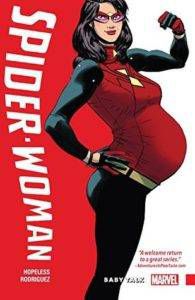 This was everything I needed and didn’t know I needed. My son had recently turned a year old, was showing some pretty significant developmental delays, and as a single mother, I was completely overwhelmed and sleep-deprived. I couldn’t figure out why everyone else was so damn delighted with motherhood—unless they were all lying about it—because I felt like I would do indecent things for a full uninterrupted night’s sleep, not to mention a day to myself. While other people were posting about their kids saying their first words and milestones we had yet to reach, I was busy navigating the Early Intervention system and wondering/worrying about what was going on with my son, and what had I done wrong, where had everything gone awry. I felt very alone, and nights were the worst. After my son would go down for the night (temporarily, because he’d wake up—still!—multiple times a night), I’d be alone with my thoughts and most often, end up in tears. Was it delayed PPD? Maybe. Was it severe sleep deprivation? I’m sure that played a significant role, without a doubt. All of these things, combined with working full time, parenting full time, and then navigating the EI system? Of course. My family was super helpful and supportive, but as it is with most things in life, you can have all the support you want and need, but in the end, it’s up to you. Which is where Spider-Woman comes in.

I was intrigued—the cover of the first volume shows Jessica Drew in her Spider-Woman costume, in profile, with a big pregnant belly. It is glorious to see a pregnant superhero, let me tell you. I had been unfamiliar with Spider-Woman to this point, but was immediately drawn in to her ambivalence and conflicting feelings about reducing her superhero activities because of her pregnancy. She hates that she’s relegated to the sidelines, and is trying to reconcile the changes that lie ahead for her. Needless to say, I think most pregnant women can relate to that, superhero or not. Becoming a mother isn’t a seamless event for many of us, no matter what social media or television would have you believe. It can be hard to reconcile a childfree life with life post-kids. Friends without kids often can’t understand (rightfully so) why it’s so hard to talk on the phone, or why you fall asleep without meaning to most nights on the couch before you can call them, and eventually, stop calling. You resort to texts instead of calls. You annoy people with all the pictures of your precious spawn, even though you swore you wouldn’t be THAT mom. And yet. Late at night, when said spawn wakes up for the fifth time and you’re nursing in the dark, completely depleted emotionally, you begin to understand that “dark night of the soul.” 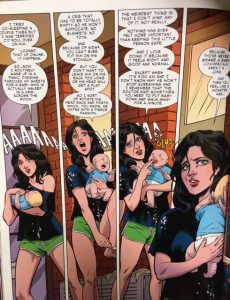 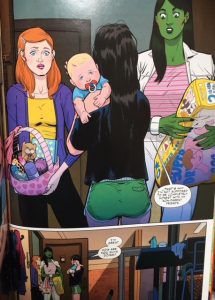 Jessica Drew embodies all of this—at one point, she shows us how her apartment is a mess, she’s overtired, exhausted, sometimes needs to step away from the baby because she’s stretched so thin and doesn’t want to lose it—but says nothing to her childfree friends who visit. She illustrates the conflict that moms who work outside the home feel—her job as a superhero is so integral to her personality and sense of self, but she’s torn, because she also loves her son and wants to stay home—but realizes that to be happy and true to herself, returning to being a superhero is good and healthy for everyone. Not that it’s easy—in Volume 2, she says, “When I’m at home, I’m in momma mode. When I’m at work, I’m in punching mode. And it pretty much always feels like I’m neglecting one responsibility or the other. So…now we do days off. Highly caffeinated, anxiety-ridden, wildly exhausted from hauling this diaper bag through hell and yet somehow I’m all out of wipes—days off.” I mean, COME ON. Spider-Woman is all of us, amirite?

Although I knew she was just a comics character and not real, something about Jessica Drew broke through the pages and gave me comfort. If this amazing superhero was overwhelmed with motherhood (and she was also a single mother by choice, using a sperm donor to conceive her son), then maybe it was completely normal to feel these things. Here was this kickass, take no crap woman giving voice to the notion that even she felt like no matter what she was doing, she felt like she was coming up short, all the time. Somehow, seeing it on the page made it seem not as bad.

Comics, then, were—and are—more than an escape. They were (are) a lifeline. The Shifting Gears arc ends after 3 volumes, but I’d love to see it continue, especially given the developments at the end. (Also for purely selfish reasons, because I’d like to see how Jessica handles a toddlermonster). But really, I’m forever grateful for this arc of Spider-Woman, because it did something for me that no parenting or mothering book could do: it normalized the struggle of motherhood. A comic about a woman who contains radioactive spider DNA and has superhuman powers normalized motherhood for me.

Just go with it.