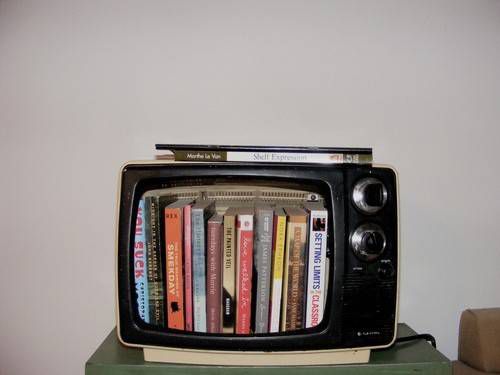 For my whole life, I’ve thought my reading habit, my PhD in literature, my career as a teacher, was all about my personal love of books.  I thought it was about my desire to live inside and between words, to find meaning in the stories of others, to make sense of the world through narrative.

Turns out that’s all bullshit. I was brainwashed by the people running public television in the 80s and 90s. Liberal media elites! Except the ones who work for public broadcasting and so don’t make that much. This realization came to me as I was thinking back to my favourite shows as a kid — the ones that really shaped my sense of myself in the world. Let me walk you through some of the villains in this plot.

This one is from well before I was born, but it went on and on and on in reruns and I’m sure I saw every one sixteen times. Readalong was about a boot and a shoe who were married for some reason and also really liked books. The boot was the boy, which you could tell because the shoe wore lipstick and was really high maintenance. You’d sit in front of the TV and shout out the spelling of words and sometimes just watch kids read books and somehow this was all very entertaining to us all.

Read All About It was about a bunch of kids who for some reason were left a coach house in some old dude’s will. Obviously, they use this coach house to start their own newspaper (?) and also solve mysteries and sometimes travel through time. There’s a sentient typewriter named Otto who helps them out with stuff and a computer (A COMPUTER) named Theta. The kids often solve crimes from literature and history and also never seem to have to go to school.

Press Gang was like a cross between Degrassi Junior High and a newspaper, basically. It was about a group of kids putting together a pseudo school newspaper, but for some reason they always got incredibly serious stories and had to use their mad critical thinking and literacy skills to solve real world dilemmas and crises. This show taught me that the plain bookish girl was the absolutely most desirable woman in any room, a lesson that has not served me well in the slightest.

“He’s a ghost, and he writes to us.  Ghostwriter.” That kind of epic and amazing dialogue could only be found in the world of public television in the 1990s. The premise of Ghostwriter was that a bunch of loser kids with no friends could hang out in a basement and talk to a ghost who communicated only through printed words. Together they solved mysteries. Ghostwriter premiered when I was 9 and it was a revelation in my life. I proceeded to wear a pen around my neck for the next three years, always on the look out for books to become clues in a mystery that I was certain to soon stumble upon. That never actually happened, obviously, but I did get to look like an idiot for three years of my life.

Ok, I was legitimately too old to be watching Wishbone but I did anyway — I saw every episode, and I’m pretty sure the only reason why I made it through my BritLit survey in second year was because of my thoughtful knowledge of the classics gleaned from Wishbone.  For those not in the know, Wishbone was a Jack Russell terrier who lived out the adventures he read about in great works of literature.  Personally, I think they should reboot Wishbone and give us renditions of Girl with a Dragon Tattoo, 50 Shades of Grey, and Hunger Games.

How was your mind poisoned by the liberal elites in the public broadcasting game?