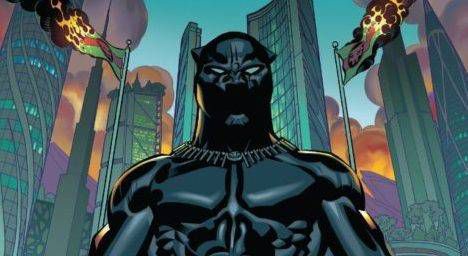 Recently Roxane Gay revealed on Twitter that her Marvel series Black Panther: World of Wakanda had been canceled. 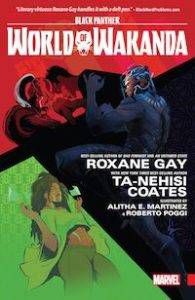 World of Wakanda, which Gay co-wrote with Ta-Nehisi Coates, with backup stories written by Yona Harvey and art by Alifa E. Martinez and Afua Richardson, is the second Black Panther-related series to be canceled in the span of two months. The other series, Black Panther and the Crew by Coates, Harvey, and Butch Guice, was canceled after only two issues had been released.

These seemingly haphazard cancellations caused confusion and frustration among fans. Why put out so many series, only to pull the plug before the books have time to find their market, possibly in trade paperback format? Why hire the luminaries listed above without giving their work a fair shot? Why cancel two series revolving around a character whose star is very literally on the rise, with a trailer for his first movie dropping to tremendous excitement?

From a strictly short-term financial perspective, the cancellation of World of Wakanda makes sense. Issue #6 only sold 14,547 copies in April 2017, which is well below the potential cancellation threshold of 20K for a typical Marvel book. (As a quick reminder, when we’re talking about comic book sales figures, we mean preorders to retailers. Not trades, not digital, and not even how many issues end up in readers’ hands – just what comic book stores think they can sell.)

But when I dug into the sales of Black Panther-related books a little further, I found an interesting story: 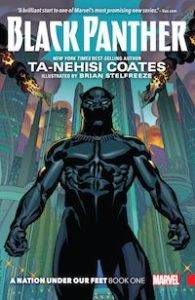 The main Black Panther book blew out of the gate with over 253 thousand preorders in April 2016, making it easily the bestselling comic of the month. It dropped down to 77K in May, which is not a surprise – #1s always sell well, and this was a highly talked-up #1 – but then maintained a healthy average of 71K per month during the six month period between issue #2-#7.

In April, the only month for which we have sales of all three Black Panther titles, Black Panther, World of Wakanda, and Black Panther and the Crew sold 79K. Total. And that’s with the typical #1 boost for the first issue of Crew. Assuming Crew had a 25% drop in sales from #1 to #2, just like World of Wakanda did, and assuming that the other two books held steady, that would put us back at…70K per month.

In other words, the gross profit Marvel can turn off of the Black Panther franchise via the direct market is finite, no matter how many books they put out. But of course, it costs three times as much to make three comics as it does to make one, so they’ve cut their net profit by two thirds. When faced with those numbers, canceling both spinoff books makes solid financial sense.

Am I saying that Marvel was right to cancel these books, or that they should never have created them to begin with? Absolutely not. The issue here is not Marvel’s decision to cancel failing books, but the multiple strategic failures that set those books up for failure in the first place, especially when you place the cancellations in their greater context:

Marvel’s strategy for the past couple years has been to release as many books as they possibly can. As Rioter Charles pointed out over at CBR, “Between October 2015 and February 2017, Marvel launched or relaunched at least 104 ongoing superhero series, for an average of about six new #1s a month.” The strategy here appears to be to rely on those artificially inflated #1 sales I mentioned above to keep them in the black, then cancel series once they’re no longer profitable via the direct market. (For additional context, in April 2017, Marvel put out 86 non-Star Wars books, 38 of which are below that 20K mark – and 25 of which sold worse than World of Wakanda. Why not cancel friggin’ Bullseye?)

The problem here is that flooding the market with closely related books actually hurts sales. Again, sales of Black Panther dropped significantly when World of Wakanda launched; sales of both books dropped again when Black Panther and the Crew launched. Had Marvel not added two more series, they might still be selling 70K per month of Black Panther instead of the 20K per month that they’re left with now.

2. Ignoring Everything but the Direct Market

But why did those sales drop when Marvel added more series? Well, price is probably a big reason – a customer who was willing to pay $4 a month to read about T’Challa might not have been willing to pay $8 or $12, and didn’t want to be left with what they might have felt was a half or a third of the story.

But Black Panther also particularly appeals to the growing audience of newer and/or more casual readers – readers who don’t have a pull list or understand the ins and outs of the direct market. (Nor should they! No other medium requires that its consumers have such in-depth knowledge of its internal accounting in order to be “real fans.”) These readers might have been willing to venture into a comic book store for one book with a name like Coates’ or Gay’s attached to it, but three is a little daunting. Better to drop one book, maybe, than risk falling behind on an overly-complicated story. (I don’t believe the stories between all three books were that closely linked, but that’s beside the point. I’m talking about reader perception.)

But that’s the direct market. Who’s to say those readers wouldn’t have picked up trades with the same characters and creators? (Especially since as Swapna Krishna points out here, the readers these books are primarily aimed at are most likely to read in trades to begin with.) What if World of Wakanda and Crew had been self-contained, direct-to-trade stories like Squirrel Girl Beats Up the Marvel Universe? We know Black Panther’s done phenomenally well in trades; why couldn’t Marvel piggyback on that success and build their potentially immensely profitable content around the format where it would reach the most readers and make the most money? 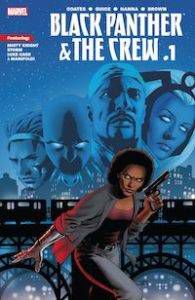 3. Failing to Leverage Black Panther into a Bigger Brand

Black Panther is the first mainstream black superhero. The character has been around over half a century. Yet he only debuted in live action for the first time last year, and won’t have his own live action vehicle until next year. He hasn’t consistently had his own series on the stands, and this is the first time Marvel has tried to franchise that series.

To all appearances, these sales show that T’Challa can’t sustain multiple books about himself and his supporting cast the way Spider-Man or Deadpool can. But how long have the Deadpool or Iron Man or even Captain America brands been holding down multiple books? They certainly weren’t ten years ago.

No, it takes concerted effort to build that kind of platform for a character – effort via sustained runs by celebrated creators, robust promotion, multimedia appearances, merchandising, and a clear sense of who the character is to the audience outside of regular Wednesday Warriors. Why has Black Panther never received that effort in the past (…I mean, I know why), and more importantly, why isn’t he receiving it now?

And speaking of failing to leverage opportunities…

As I mentioned above, the trailer for 2018’s Black Panther just dropped – heavily featuring the female cast, by the by – to tremendous excitement. This seems like a really bad time for Marvel to turn to potential customers looking to learn more about Shuri or the Dora Milaje and say, “Sorry, we just canceled our only book about the women of Wakanda.” (Though to give Coates credit, the women in the main book are present, numerous, and fascinating.)

Even worse in some ways is the fumbling of Black Panther and the Crew six months after Luke Cage broke Netflix. If you can’t figure out how to make a lot of noise about a book starring Black Panther, Luke Cage, Misty Knight, and Storm in 20-freaking-17, I don’t know how to help you.

I realize that Marvel Comics is a much smaller operation than Marvel Studios and has no way to push them to cross-promote the source material for their movies and shows, but you’d think they’d at least jump on some social media hashtags or something. It’s money on the table, and it’s a disservice to the readers and to the characters.

5. Forgetting that All Cancellations Are Not Created Equal

Maybe the sales weren’t there. Maybe it cost more to make the book than it could earn back. Maybe Marvel canceled ten other books that month – who can keep track?

I don’t care. This was a groundbreaking comic, and the only place for many readers to see people who looked like them – on the page, and on the masthead. It deserved a place on the stands.

This is a terrible look for Marvel, too, after over a year of bad press from their HydraCap storyline, their unsubstantiated claims that diversity is bad for business, their editorial re-closeting of queer characters, their failure to stand by Chelsea Cain when she was harassed off Twitter, and Iron Fist’s just…just everything. They are building a brand that, intentionally or not, tells readers who aren’t white, straight, cis, male, Christian, and dyed-in-the-wool True Believers from three decades back, that there is no place for them or their money at Marvel. That’s a losing proposition.

Marvel had a chance to create a really impressive suite of Black Panther titles if they’d packaged and marketed them appropriately. They even could have just maintained the 70K per month they were pulling in with Black Panther alone before they split the market. But that book’s down to 30K, and the readers who jumped ship due to Marvel’s mishandling aren’t likely to come back to the book, especially after Marvel’s made it clear how little they value those readers.

Until Marvel seriously reconsiders their approach to building brands and expanding markets, all they can look forward to is this same story of dwindling sales, and that’s a downright shame. There’s a lot of good comics still waiting to be shared over there.