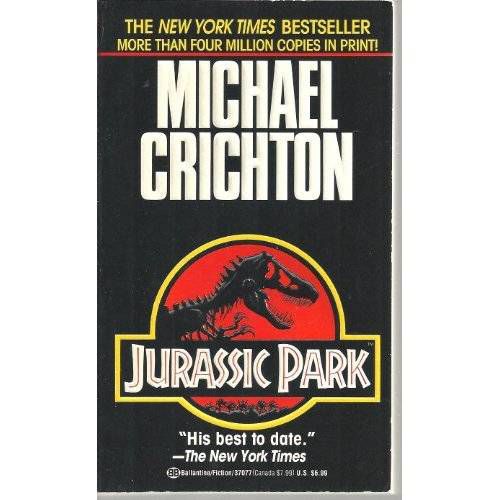 This is a request that you take a trip down memory lane back to a transformational point in your reading life: the moment you picked up your first adult book (by which I mean the first book you read that was marketed specifically to adults). What was it?

Up until this point, I had been a dedicated consumer of The Baby-sitters Club (team Claudia), with the occasional Sweet Valley High thrown in when I was feeling a bit gossipy. I don’t even remember where our copy of Jurassic Park came from–my parents were not readers. All the books in the house were in my room. It just appeared. MAGIC DINOSAURS. I started reading it because I had seen and loved the movie (yes, that does happen). And then I read it again, and then I read the sequel, and then I read Andromeda Strain, and somehow got my hands on The Shining, and then discovered that you could buy books for $0.25 at the thrift store without my parents having to be there to sign me up for a card of some sort. Soon, I was coming home with cardboard boxes full of books, all bought with my babysitting money.

My parents were amused, gave me a nickname (“mushroom,” because I just sat around and read, get it?), and fished a bookshelf out of the garage for me to use. All that thrift store book shopping quickly steered me toward the classics–I wasn’t interested in Chicken Soup for anyone’s soul, or paperback romances, and Penguin classics were the next most populous thing on the shelves. Jurassic Park made me reach for books that weren’t available at my school library, which led me to Goodwill, which led me to Dickens. I wouldn’t call Crichton’s book a gateway because that would imply it’s less awesome than what came after (and it most certainly is NOT less awesome), but as Book One, it pushed me in a certain direction.

I don’t think another book would’ve been as influential. It pushed a lot of hot buttons that I still have: weird science, a dour and sarcastic main character, intelligent children, monsters, hubris. If the first grown-up book I picked up hadn’t scratched nascent itches, I might not have pursued adult fiction at all. I might have lost interest in books altogether. Next: if my local thrift store didn’t have shelf after shelf of black-spined Penguins, I might have stayed in the Crichton-sphere, becoming a one-dimensional reader.

I don’t believe in fate, but I do believe I’ll give thanks to whatever force (I suspect the son of my mom’s best friend, who was obsessed with paleontology) left that ratty paperback on the floor in our living room.