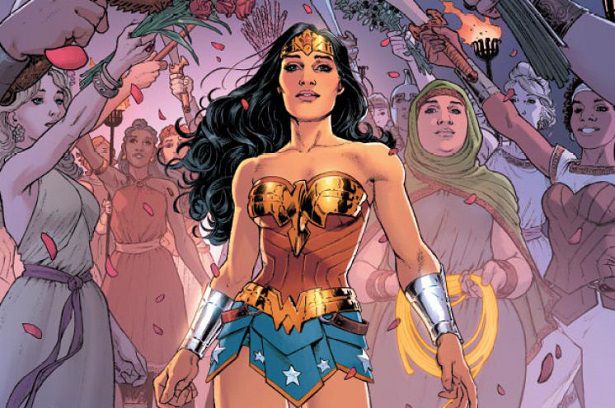 I still consider myself a newbie to the comics world. I can’t remember exactly, but I really only started reading comics less than two years ago—and in all honesty, probably closer to a little more than a year ago. All this to say: in many ways, I’m still exploring the genre, still learning, still figuring out my takes on everything. One thing that was the hardest for me to reconcile when I first started reading comics was the issue of origin stories. As in, multiple origin stories. Whyyyyy? For the love of all things holy, why? Forget the issues of reboots and such; that’s a whole other post in itself.

My first exposure to this was Wonder Woman. There are multiple origin stories for her, and at one point, she was even given a sister, Nubia (where are HER stories, DC? That’s something we need, stat, please and thank you) and a brother. I first read Rucka’s Wonder Woman: Rebirth, in which Hippolyta cries on the beach, begging the gods for a child, and sculpts Diana out of clay. Eventually I tried to read Azzarello’s run (The New 52), and to be honest, I didn’t care for the art or the violence, but ESPECIALLY not for his take on her origin, where she’s the naturally-born daughter of Hippolyta and Zeus, and the Amazons are women who rape men and then sell boy children into slavery. No thank you.

I never start a series in the middle, and I always read books in a series in order. I mean, I’m not a monster. So when I started to get into comics, and realized that most characters have varying origin stories, retcons, and arcs…well. It just seemed a bit ridiculous. And more than a bit disconcerting. How does one explain these things? WHY is it even allowed? What do you mean, that was done away with in the reboot? Just no, no, no. It was overwhelming and anxiety-producing, and as a newbie, I felt like I would never understand the rhyme or reason. But I forged ahead anyway, and stuck to the runs I liked, choosing my preferred origin story and just pretending like the others never existed.

But it got me thinking about why I am/was so uncomfortable with the idea of multiple origin stories, retcons (retroactive continuity), and arcs.

I am a person who likes order. I have always been this way. In college, I wrote up “Jaime’s Life Plan,” which was…exactly what it sounds like. It outlined my plans for graduate school, my pre-doc and post-doc internships, future job (complete with the hospital I planned to work at), and ideal ages for getting married and having children.

Almost nothing in my original “life plan” has worked out the way I planned. I’m a single mom by choice to one child with different needs, and I work in a field completely different than the one I planned. Because that’s life—things happen, and we can’t always control or plan everything. For many of us, this makes us uncomfortable. I realized that comics offer a taste of this—although there is so much about them that’s fantastical or NOT like everyday life, multiple origin stories and retcons are maybe the most real-life thing about them.

If you have a less-than-ideal origin story, this doesn’t always have to define you. Make your own family. Choose your loved ones. Rewrite what’s important to you. If you have a “life plan,” but it’s not going exactly the way you wanted, maybe it’s time to reexamine it. Do you even still want those things? If so, what can you do, right now, to get you closer to the goals? If not, that’s okay, too—where do you go from here, and what can you do about it? Who can you connect or reconnect with; what do you have to learn; what do you need to give up?

In the end, it’s not an acceptance of multiple origin stories that has allowed me to love comics—it’s more of a wary coexistence with my cognitive dissonance. (And maybe a refusal to read or acknowledge the origin stories I dislike). But again, isn’t that the way life works? Sometimes it’s not always an acceptance, but a coexisting with something.

Maybe comics are more like real life than we thought.