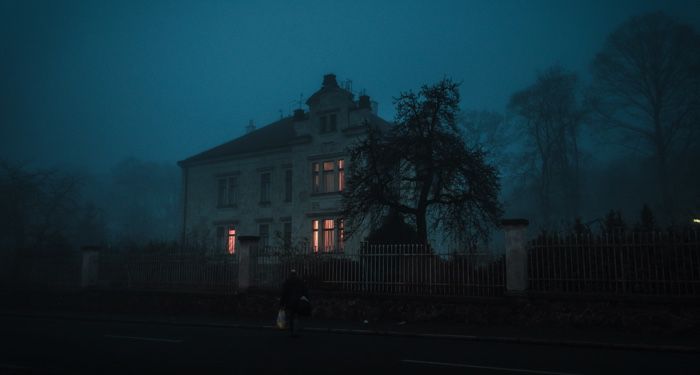 Every year, as October rolls in with the autumn fog, the list of must-see horror films, and must-read horror novels seems to have grown exponentially from the previous year. Why do we love horror so much? Western society uses horror to address fears and anxieties in a safe environment. On the other hand, an overconsumption of horror can contribute to collective fears, exacerbating anxieties and introducing new terrors.

Horror, or the intention to frighten and/or disgust readers, can appear in any genre.  Current horror trends towards the introspective and atmospheric with creeping dread. Ten years ago, horror in fiction was more closely aligned with jump-scare horror popular since the 1980s. One of horror’s mainstays is primordial fear, and the invitation to settle into discomfort.

Primordial fear are fears of loss experienced by all beings, such as loss of life and abandonment. Fear is a self-preservation instinct, to keep you from true danger. In order to be successful, popular horror novels must be exploitative of fundamental social fears, which are contextual to a culture or generation. The intended audience must see what they believe to be their unique fear, examined and contested on page. A knowledgeable horror author is aware of contemporary fears and how they are affecting their social landscape.

And humanity’s tendency to explore societal fears in this way is ancient, part of storytelling DNA. In Ancient Greek dramas, high emotion and absurd tales of murderers and vengeful gods were a public catharsis. According to Aristotle, drama was a way to purge oneself of negative emotions, including fear, pity, and disgust. The release valve on an Instant Pot of emotions.

Across the globe, folklore has featured all manner of ghouls and demons, witches, ghosts, and other dark creatures, but horror isn’t just about the fear of what goes bump in the night. The fear of uncertainty and the awfulness of reality influence what we know today as horror, with works inspired by war, poverty, illness, and historical figures. As in life, there isn’t always a “villain.” Literary trends are greatly influenced by society and horror is no exception. Its trends often seem to mirror current concerns.

In European medieval literature, horror elements appeared in the forms of the great monster Grendel in Beowulf and even the descent into hell in Dante’s Inferno. These texts are filled with fears about the unknown status of the world, supernatural creatures, morality issues, and religious fervor. Meanwhile, horror elements in Persian medieval literature were established with what would later be published as A Thousand and One Nights. This collection featured ghouls, jinn, a ghost town, and a talking serpent. Prior to the Industrial Revolution, horror’s beginnings could be found within mainstream literature.

Post Industrial Revolution,  The Romantic Era produced some of the most influential pieces of horror literature for the West, with the Gothic Romantics contributing some tropes we now consider classic in horror. After decades of focus on modernity and progress, Romanticism sought emotion and beauty and nature above all. Gothic literature has a haunting feeling, more so than general horror, and tends to be claustrophobic and distorted. Female-centric Gothic novels, such as Jane Eyre, explore social horrors within a Gothic setting.

In the novel, Jane is treated poorly and given few choices. Her reality, and that of many real women at the time, is that of misery. Passionate and independent, Jane is able to rise in social ranks by improving her Christian piety. The wife in the attic trope appears in Jane Eyre, with Bertha Rochester. Bertha is the mentally ill and abandoned wife of Mr. Rochester. Only after Bertha dies, and Jane agrees to marry a poor missionary, is Jane allowed to wed Mr. Rochester. Piety is the escape. According to Gothic literature, the horror of being a woman, being poor, or being unloved, could be solved with having good morals. This strict moral code of 19th century England continues to influence contemporary horror.

The suspension of disbelief required for Gothic literature inspired the idea that there was something more out there, and during the 19th century, world exploration (and exploitation) was rapid. Society’s literal world was expanding with new ideas, people, and places. Works such as Frankenstein (1818) and The Strange Case of Dr. Jekyll and Mr. Hyde (1886) highlighted science’s indelicacy, with the supernatural at the forefront. Science-based horror played into the fears of scientific progress moving quickly, at the same time providing an outlet to explore these fears.

Throughout the 19th century, Penny Dreadfuls were popular with working class children and teenagers as literacy rates rose. These small books often depicted a hero in danger with some sort of supernatural villain, like a vampire, or serial killer like Sweeney Todd. Cheap and momentarily terrifying, Penny Dreadfuls were the Victorian version of Goosebumps. The Victorian era also produced classic vampire novels Carmilla (1872) and Dracula (1897).

Bram Stoker describes Count Dracula as uncivilized and primitive. The narrator of Dracula, Jonathan Harker gives derogatory descriptions of people of other races and nations. This is important to note, as the British Empire had an unprecedented amount of power and wealth at the time. Harker, an everyman character, is written with the xenophobia that is inherently tied to colonialism.

Vampirism in Dracula is treated like a disease or parasitic behavior. Victorians were extremely concerned with cleanliness, not just in hygiene, but sexual purity as well. Dracula mocks the sexual values of Victorians through spilled blood, multiple rape scenes, and performatively flipped gender roles. Lucy and Mina both begin the novel as models of chastity and “goodness.” Lucy is transformed into a vampire, and the only way to save her from evil is to fully destroy her. Mina is guarded like a child, while simultaneously exploited. Their fall from grace is dangerous to Harker and his party, as they are left unguarded by the women’s purity. Harker’s own fall from grace is his submission to the three female vampires, and implied submission to Dracula. Only when Harker destroys Dracula, effectively destroying the evil, does he and Mina receive their “salvation.” The layered Christian and sexual symbolism of Dracula made the book controversial, and thus immensely popular.

Considered tame by today’s standards, The Picture of Dorian Gray was a provocative book for its themes of sin, beauty, and homoeroticism, without a moral lesson. Immoral literature was, for the Victorians, any work that did not seek to better the reader’s education or contribute to society. Dorian Gray is at once vapid and grotesque, a reflecting pool of the burgeoning middle class.

Rather than lose freedom to do as he pleases, Dorian choses immorality. The concept of one’s sins being visually recorded is terrifying, especially to devout Victorians. Reading Dorian Gray, first in novella format, then in full print, must have been a wakeup call to Victorians’ own metaphorical sin portraits rotting in the attic.

By the time horror made its way to the silver screen, it was established as a literary mode. The zombie genre that dominates today takes inspiration from West African and Haitian folklore, classic works, and modern horror tropes. Contemporary zombies can represent fears of  warfare, disease, race/class tension, and inequality. According to Haitian folklore, a zombie is an animated corpse, raised by witchcraft. Zombies began to appear in literature in the West in popular comics and short stories around the turn of the 20th century. One of the first iterations of the modern zombie appears in H.P. Lovecraft’s story “Cool Air.” The narrator is haunted by cold air, as it reminds him of a neighbor who was obsessed with maintaining his life with a refrigeration unit and ice. Lovecraft’s interpretations of zombies were influential to horror, but they were also racist caricatures of inherently Black mythos.

During the 1960s and 1970s, with the Civil Rights Movement and the Vietnam War, unease and violence felt immediate. News was readily accessible with radios and televisions, making even far away events feel close. The horror at this time, works like  The Exorcist and Carrie, mirrored the inequality and uncertainty that people were experiencing in their everyday lives. The object of horror interrupts the idyllic life, creating chaos and leaving a trail of tragedy behind. This classic horror trope is easily recognizable and frequently reoccurs during times of political and social strife. The real horror is injustice.

In Carrie, a young girl is abused by her mother and bullied by her classmates. To free herself, she must take revenge by accepting the unknown and committing a series of inadvertent atrocities. Carrie is presented as the villain, despite her pain being the center of the story. There is no justice for Carrie or her abusers.

The horror of injustice continues today in film and literature, as marginalized groups write their way through horror. Themes of gender roles, colonization, climate anxiety, race, and privilege mark contemporary horror. Interestingly, though, a frequent criticism some white people have of new horror by non-white authors is that it isn’t “scary enough.” For the white reader, fears are condensed into an imaginative, gruesome monster. White values, religious and political, are flipped in horror to show the absurd and terrible. Worldviews that prize wealth and status above all else would find Thomas Harris’ Hannibal Lecter series bone-chilling. The should-be successful man is behind bars, owning up to his crimes. Religious values are a common theme in horror written by white authors, like The Omen and Rosemary’s Baby, which show distorted versions of accepted Christian doctrine. Since its release in 1976, The Omen has held a cultural influence over apocalyptic anxieties and belief in the antichrist. The monsters of horror have grown beyond simplistic characters like vampires.

Meanwhile, horror, as told by authors of color, is made up of the horror of reality. The Only Good Indians by Stephan Graham Jones features a ghost elk, but the true villain or terror of the book is the sense of dread and guilt throughout, knowing that revenge is imminent. And Alyssa Cole’s When No One is Watching features the horror of gentrification.

Jordan Peele’s horror films, while widely popular, are a good example of different responses to horror when comparing white audiences to audience members of color. Get Out (2017) was critically acclaimed and even won an Academy Award for best original screenplay, yet white majority audiences found the film more uncomfortable rather than scary. Get Out is a direct response to the classic, problematic trope that has existed in horror, in which the character of color is the first to die. This character is underdeveloped and therefore disposable, speaking volumes of the writers’ — and society’s — opinions of people of color. This tired trend is on its way out the door as racism cannot be accepted as the norm.

Horror in the 2020s may take a new shape. Anxieties about climate change and new diseases have already birthed novels like Severance, Annihilation, and The Parable of the Sower. Apocalyptic fiction has been on the rise for decades, exposing our fear of a future with fewer resources, fewer rights, and more dangers. After a turbulent few years, horror feels like a comfort. The void, the unknowable is just next Tuesday, so settle in and get uncomfortable.