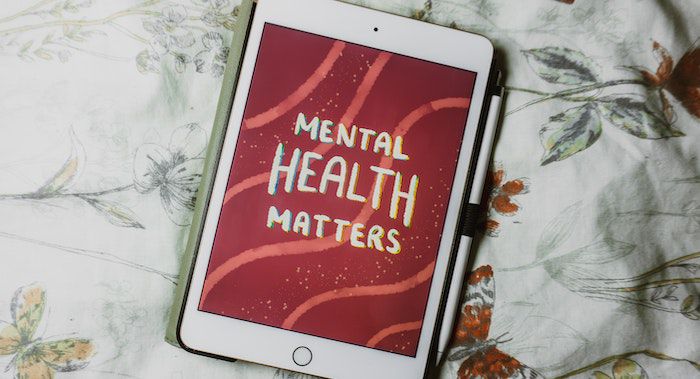 As a writer, I am instinctively drawn to using language as my descriptive tool of choice. I have an arsenal of tricks to use: metaphors, similes, analogies, references, the objective correlative, and more. With the robust English language at my fingers, it would seem that nothing could be indescribable as there are words for everything.

A Ubiquitous, Vague, and Ominous Thing

And yet, I knew from an early age that I was confronting a Big Bad Thing I could not translate. In elementary school, I suffered with OCD, depression, and anxiety. I struggled with finding the words to tell adults, and they did not notice that my silence was more than just polite quiet, but a strategy to avoid being labeled “crazy,” a ubiquitous, vague, and ominous word thrown around the playground, yet one that seemed to match what I was experiencing, which also was ubiquitous, vague, and ominous. My mind buckled under the pressure of dealing with these issues alone, knowing that I couldn’t point to a visible, tangible bogeyman that everyone could see. Knowing that whatever I was confronting was invisible to others, but unmistakably real and upsetting to me. I had no vocabulary to describe my pain and anxiety, and I wasn’t even good enough at drawing to try to show people. I couldn’t find any books that depicted my suffering, either in illustrations or in prose.

As I grew older, the symptoms changed but the struggle to vocalize my experience remained. Then, at age 25, everything changed when I discovered the power of graphic narratives to make my mental illness feel validated and seen.

Feeling Seen for the First Time

The first time I realized the power of graphic narratives to do this was when I read Marbles: Mania, Depression, Michelangelo, and Me (2012), a graphic memoir by cartoonist Ellen Forney. By then, in February 2013, I was an adult and in the eighth year of receiving a diagnosis of bipolar disorder. I still felt challenged to express my symptoms to others. I relied on descriptions, like saying the depression feels like I’m contained, that something is pressing on my head and I can’t escape it, while the highs feel like there is no limit, like my skull is open. Reading Forney’s memoir first as a manic depressive and second as an artist was a relief. Someone else “got it,” and someone more visually articulate than myself. The images in Marbles lingered in my mind, and I would return to them again and again, a few images in particular.

First, her drawing of herself in the fetal position on the couch, so depressed she was unable to move. I saw myself in that picture as I also suffer from psychomotor retardation, a symptom of severe bipolar depression when my ability to react, to speak, and to move slows down, so much so that I get into bed or on the couch in the fetal position and feel locked, unable to even move my arms. Yeah, that was me! Forney’s picture in Marbles was exactly that.

Another image I identified with was the merry-go-round, where the riders on horseback would be high or low or somewhere in between to signify the stages of mania and depression. That’s how it feels: like you are on a horse but someone else is driving it, your moods are out of your control, and there is a kind of absurd carnival aspect, a tragedy and a comedy but totally surreal. Yeah, that was me, too. Year later, when I interviewed Forney here on Book Riot about her next book, Rock Steady, she agreed that “one of the visual metaphors in Marbles that has resonated I think for a lot of people is the carousel as a way to depict the different moods.”

And the last image in particular that stayed with me was of Forney in the midst of a manic episode. She was planning a 30th birthday party celebration for herself, inviting all of Seattle, and arranging elaborate entertainment, and designing an epic back tattoo. In a two-page spread, Forney strides through the street, her arms twisted into curly cues, arrows pointing to huge text showing her thought process as her ideas escalate bigger and bigger, that limitless, endless, intoxicating sensation of being dead center in a swirling typhoon of genius and flow. Yeah, that was me, too.

In the years to come, I would press her book upon others — my mom, my best friend, my therapist, my entire group of intensive outpatient members — and point to different images to explain what I mean. As I expected, people told me they understood my experience better through reading the graphic memoir. “Right?” I’d say, nodding. “Now give me my copy back!”

Forney’s Rock Steady is essentially a guide to living with bipolar disorder, intended for families, friends, and allies, but most especially individuals who suffered from the illness. Forney explained the whole concept behind the name Rock Steady, essentially a compromise between the “rocky” moods and the efforts it takes to “steady” yourself and remain stable, healthy, and well as best you can. “For me,” Forney said, “one of the most important visual metaphors in Rock Steady is really related to the title…[with this pun], they’re both verbs, and so what stability is about to me, is that it’s an action” (emphasis mine).

“I think the way that we generally interpret that is to have it as something that stays still,” she continued. “But what stability is really about with a mood disorder is that you’re going to rock, like life is going to rock either from within yourself because you have a mood disorder or just because that’s what life does.” And remaining steady does not mean standing still but rather taking some effort to balance yourself.

I really connected to Forney’s title, as managing my illness most of the time seems to take every energy of every second of the day. It feels like every consequence is a measure of how well or poorly I have that balance. Getting treatment for this vast, nearly indescribable illness — which was later re-diagnosed as schizoaffective disorder bipolar type — can feel like a crapshoot, with prescribed chemicals that float around in a brain psychiatrists cannot see, as opposed to something visible and tangible like a burn, where you can apply medicine and see the reaction. Hence, the Rock + Steady concept really works well as a linguistic and visual metaphor.

The Advantage of Visual Narratives

A few years ago, when I was diagnosed as having Asperger’s, I discovered I have a condition called aphantasia, in which people have a very poor mind’s eye, ranging from not being able to picture an image based on a description to having some capacity to do this. I have trouble visualizing concrete images in my mind. Thanks to graphic narrative creators, though, I now have ways to explain my symptoms in a visual way I am not creative or capable enough of doing on my own with my myopic mind’s eye.

Furthermore, a number of people I have met who have read Marbles also tell me how they appreciate that reading a visual narrative is easier to understand during volatile moments when the mind is in flux. Forney knew what I was talking about.

“I know one of the things that has definitely come up a lot is how difficult it is to read, and particularly when you’re manic,” she agreed. “I know it really was for me because I just didn’t like sitting and focusing on words, it took a little too much concentrated attention.”

With comics, though, “there’s a lot of open space, and it just it comes from a lot of different directions so it engages your brain in a different kind of way…it’s not just a whole bunch of little words” she told me. ​​

Graphic Narratives Give Kids A Crucial Vocabulary for Mental Illness

Visuals democratize a story, so that even a child or young adult could “read” an adult graphic novel. Better still, sequential art in the form of comics, graphic novels, and graphic memoirs are published with younger audiences in mind and accomplish just that.

Recent graphic novels and memoirs about mental health for young adults include Speak: The Graphic Novel (2018) written by Laurie Halse Anderson and illustrated by Emily Carroll, The Fire Never Goes Out (2020) by Noelle Stevenson (2020), and Lighter Than My Shadow (2013) by Katie Green. I read Lighter Than My Shadow and was especially impressed by how Green depicted the oppressive storm system of intrusive thoughts that dragged her into compulsive disordered eating, anxiety, and depression as an angry cloud outside her head. Likewise, Hey, Kiddo (2018) by Jarrett J. Krosoczka made the anxiety, nightmares, and depression that the author experienced in a family plagued by unhappiness and addiction immediately urgent and accessible. And in The Fire Never Goes Out, Stevenson uses images to describe the bipolar experience.

This is one reason why I have great confidence and optimism that graphic narratives for children and young adults could help offer a language that bridges the indescribable that so plagued me when I was young. Illustrations can give kids a frame of reference that allows them to point to a visual manifestation of their issues and say, “This is what’s wrong.” More comics and graphic novels will undoubtedly follow Forney’s lead, showing kids and teens who suffer from mental illness what hope looks like.

As Krosoczka says in his dedication page at the beginning: “For every reader who recognizes this experience. I see you.” Indeed, it’s seeing your experiences, your pain, seeing support, and seeing a way toward healing — a visibility that can offer a language you can use to say “I need help” — that is an invaluable gift for young readers. It is my hope that through these books, no kid will have to give up trying to describe the Big Bad Thing I could never find the words to describe.

If you’d like to read more great graphic novels and graphic memoirs that touch on mental illness issues, check out the following books: