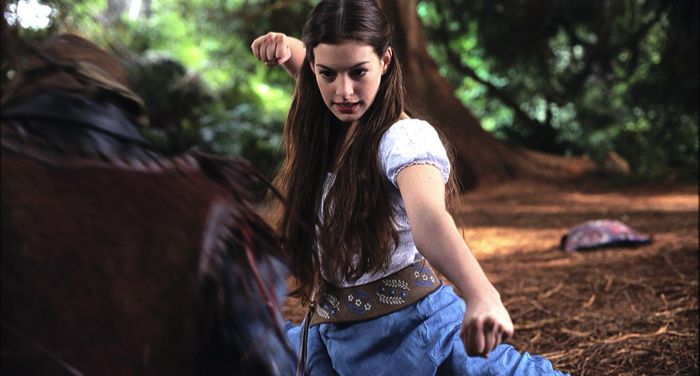 Like any good middle class ’90s baby, I am a devoted fan of Anne Hathaway. Not Shakespeare’s wife, although she rules too, but the doe-eyed screen queen who leapt into our collective consciousness as Mia Thermopolis in the grade-A film The Princess Diaries (adapted from the novel by Meg Cabot).

Imagine the surprise and delight in my tween heart when I saw the trailer for the movie adaptation of Ella Enchanted. Now a classic of YA literature, the story is a cheeky retelling of Cinderella. And our gal Anne was to star as Ella herself. 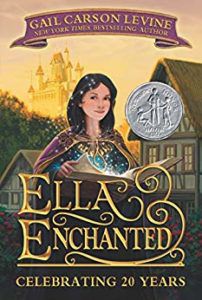 As in the Charles Perrault tale, Ella is a young girl forced to work for an evil stepmother and two spoiled, bratty stepsisters. The twist lies in the fact that Ella was “gifted” complete obedience by a fairy at birth. By rejecting her true love (Prince Charmont) to protect him, she lifts the spell and finally owns her destiny.

The film adaptation is decidedly campier than the book (with a number of shoehorned sing-a-longs and an inexplicable Heidi Klum cameo). It has major plot tweaks that weaken the feminist message of the book. Instead of rejecting Char’s marriage proposal, she doesn’t murder him despite direct orders from his uncle. Instead of battling her own destiny, she battles the cartoonishly villainous uncle. Seriously, dude has a big mustache and a talking snake.

Even with these departures from the source material, Ella’s general character remains. She’s not passive Cinderella. She doesn’t cry to mice as she sweeps the hearth. She’s Ella of Frell! She rides horses and sasses back and sneaks into balls! What fragile young ego wouldn’t aspire to her confidence and ingenuity?

Mine. See, Ella of Frell never helped me love myself. But Princess Addie of Bamarre did.

If you grew up reading YA fantasy like I did, you’ve probably noticed a common theme among young heroines. It runs through Katniss Everdeen, Delilah Bard, Mare Barrow, Tris Prior, and even Hermione Granger.

Most of the young women depicted in these tales are outspoken. Lying on a scale from opinionated to outright belligerent, these young, female protagonists are typically self-possessed, strong-willed, and brave nearly to the point of foolhardy. With all her hemming and hawing about rules, Hermione sure breaks into the restricted section a lot.

Ella of Frell certainly falls into this characterization. She is in the loudmouthed and intense cadre. They have a streak of reckless in comparison to their weaker peers. So many examples permeate pop culture. Therefore, as a young girl I got the message loud and clear: if I was going to be the hero of my own story, I needed to be more obstinate. Stubbornness was strength. Gentleness was sure to relegate you to supporting-character status.

Still, the questions plagued me. What do you do when you’re not self-possessed? When you’re not self-assured? What happens when you identify more with Prim than Katniss? Are soft and sensitive girls allowed to be protagonists, too?

The Two princesses of Bamarre

In Gail Carson Levine’s lesser-known work, The Two Princesses of Bamarre, we are presented with the cowardly Princess Addie as our protagonist.

Contrast this with Katniss Everdeen’s skill with a bow, or Delilah Bard’s prodigious experience as a cutpurse. Addie has no penchant for violence. She does not talk back. Most certainly, she does not break any rules. Ever.

Princess Addie likes to sit quietly to learn and study. Her greatest strength is the quality of her needlework. In childhood games with her sister Meryl, Addie always plays the damsel in distress. Meryl plays the courageous rescuer, dragon slayer, the vanquishing hero.

Until Meryl catches the Grey Death, an incurable disease. When their father, King Lionel, does less than the bare minimum to find a cure, Addie realizes that if she wants her sister to survive, she must find the cure herself.

Armed with magical boots, an enchanted tablecloth, and her embroidery prowess, Addie ventures forth. She fights gryphons and spectres. She outwits a cunning dragon who imprisons her. Addie discovers the truth behind an ancient and epic tale.

Addie’s resolve to do what she must, despite her overwhelming fear and mild manner, ultimately saves her sister. Her embroidery ends up becomes the key to surviving the dragon’s lair. Her soft, tender heart provides her with the way forward. By using her own strengths, not falsely co-opting bravado, Addie makes herself the hero of the story.

For a shy, inelegant bookworm afraid of her own shadow, is there any lesson more powerful than “You have everything you need inside you”?

You were brave enough the whole time.

Hermione Granger and Nancy Drew are still my heroes. But Princess Addie of Bamarre first showed me how to love myself. Even if I’m terrible at archery.