With romantic Valentine’s Day appearing in the media and my cynicism mounting, I ask myself how I am going to celebrate a holiday of love and martyrdom. Of course, then I think of how my views on love have dispelled with time. Those thoughts lead to nowhere happy.

I grew up on Disney, where love happened and good people fell in love and wed without problems. We could see how couples were made for each other. Then I grew up, and I saw people were more complex than Disney animated characters. To add insult to injury, there is even fiction of teenage girls learning that reality isn’t like romance novels, or fairytales, or animated fairytales. The horror, the horror.

If you are going to break a fictional character’s views on fairytale love, then you need to know how real girls view fairytales. When I grew up, I saw them as an escape, or tales that merited gorgeous illustrations. We had several picture books that fell to the ravages of time. My views fell apart not because the world crushed them to pieces and mocked me, but because I saw people were more complicated. Girls in fiction should experience a gradual transition, and less shame.

How to Not Break an Illusion 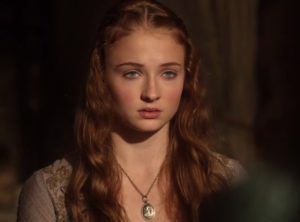 Game of Thrones annoyed me because the books and TV show claim that Sansa Stark was deluded by her fairytales and beliefs of grand knights and heroic princes. It doesn’t work that way in the books; Sansa is obviously a romantic, but she doesn’t know her fairytales well. I saw this when I sped-read the book in a weekend. She likes the trappings of being a lady, because that’s what women of her class become. Sansa is bratty, but an ordinary girl who is judged for having unrealistic beliefs. Also, the writer doesn’t know how girls view fairytales.

Take Lady’s death, for example. Lady, an innocent direwolf,  dies because  Sansa’s sister, Arya, attacks her fiancé, Joffrey, to protect a friend. Arya’s own pet, Nymeria, actually mauls Joffrey, and Arya has exiled her to save Nymeria’s life. Sansa’s response when she finds out the royal family wants to kill her direwolf is not to realize that her fiancé is a creep and a sadist, but to put all the blame on Arya and her father. While she is correct in that her father was the executioner, anyone who reads books would know that you judge a man by how he judges a dog. George R.R. Martin can write women well, but he doesn’t know how a fan of fairytales would react.

Another book, Among the Betrayed, is a science fiction dystopia where a forbidden child is arrested and accused of snitching on other forbidden children. Nina, who spent her life hidden with aunts, keeps calling herself an idiot for getting into the situation. May I emphasize, it was not her fault. She fell for a guy who ended up being a jerk and a traitor. She’s not even a teenager and she puts this burden on herself for being used and not knowing if she can stand up for what’s right.

I really do not like the book, though I can respect the author, because no one acknowledges that interrogating and torturing a girl, on the suspicion of a jerk’s word, is downright cruel. It hurt me. The last-minute acknowledgment at the end, where Nina decides to see fairytales as learning how to survive, feels like the author dabbed on a paint job to make up for a few hundred pages of gaslighting. If you are going to torture a girl for being an ordinary girl and excuse it as “end justifies the means,” then you could at least warn us.

How to Write Romantic Girls The Right Way

The Princess Diaries understood how to write a romantic girl’s views on love changing gradually. Mia Thermopolis starts as a girl who crushes on the local jock, and who learns about romance novels from a new friend, Tina Hakim-Baba. In this case she doesn’t use fairytales as reference, but Mia and Tina believe in true love.

Tina reads romance novels on a regular basis, and becomes familiar with the tropes. Tina slowly starts to realize she is in a romance novel, and gives Mia what advice she can on her relationship with Michael and friendship with Michael’s sister Lilly. With that said, sometimes the advice backfires on her; Tina’s first boyfriend Dave breaks up with her when she tries to play hard to get, but everyone agrees that he is a jerk and she deserves better. Eventually she finds better love with a second guy.

Mia’s views on romance are as follows: she wants to date a guy who is hot; who will pledge undying love; and who will see her favorite Broadway Musical, Beauty and the Beast. Her boyfriend Michael later fits the first two requirements, but not the third one. In fact, he repeatedly complains whenever she drags him to see the musical because to him it’s not realistic. He also laughs at Tarzan‘s stage musical during a sad moment. Mia realizes that having requirements may not matter if your loved one cares about you. She finds this out when she takes another guy on a date to the same play, and he has the appropriate responses. He can’t replace Michael, and her chemistry with Michael makes up for Michael’s flaws.

One running theme that comes up is that Mia isn’t ready to lose her virginity to Michael, who also mentions that while he’s willing to wait, he wants to sleep with her at some point. A bit discomfiting but realistic, considering that Michael is an adult and Mia is still a minor. Also Mia is worried sick about her health, and is worried about taking such a big step even though she is attracted to her boyfriend and wants to bone him eventually.

Mia had every right to break up with Michael on learning that years ago he helped a classmate cheat on her boyfriend by sleeping with her. It wasn’t so much the act as in he doesn’t tell Mia until she is about to initiate their first time. This meant that Michael wasn’t a virgin, he probably hadn’t tested himself for potential diseases, and he didn’t trust Mia with the information. While the book sides against Mia for breaking up with Michael, he admits that she was right when they talk about it in her senior year. They need that time to grow up, for Mia to age and decide when she is ready for sex. When they finally get back together, their maturity has changed them both for the better.