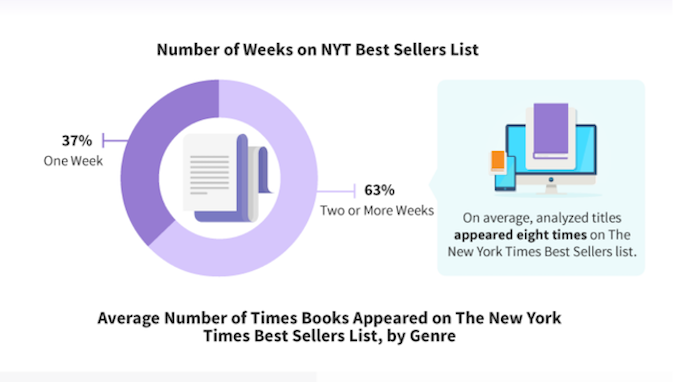 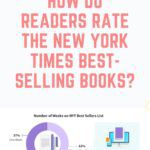 You’ve seen them. You’ve thought about them. You have thoughts ABOUT them. So it’s time to dig into the question that’s been on readers’ minds for decades: do readers really like the books that hit The New York Times Best Sellers lists?

New research from SuperSummary, an online resource that provides in-depth study guides, explored how readers rate books that landed on The New York Times Best Sellers list (NYT List). Though the criteria to a book hitting the NYT List isn’t readily available, it’s a well-known secret that books hit the list when they garner high sales from a variety of different places. In other words, they’re making sales across a number of independent bookstores that report to the NYT List, as well as mega-sellers like Amazon and Barnes & Noble. How does that translate, though, to what readers really think about these books? Sure, they might be buying them, but when they read them, do they consider them worthy of their place on the list?

For their research, the organization pooled all titles on the NYT List from June 22, 2008 to March 29, 2020. They then determined the top 100 titles from the NYT list based on the number of times it appeared on the lists in that time frame, and each of those titles was subtracted from its average ranking on the list. This made for a total of 716 unique titles.

Once those titles were identified, the top 100 reviews on Goodreads—the reader’s view of books—were pulled. The researchers looked at how many times those titles appeared on the NYT List, then subtracted this from the average list ranking. A book’s total score was calculated using this number, as well as the average Goodreads starred rating for the title.

Not all of the books within a series made the cutoff, as makes sense for the timeframe from which the data was pulled (so, for example, you won’t see all of the Harry Potter books represented here).

Let’s dig into the findings!

Using the methodology laid out above, which books that landed on the NYT List were among the most well-reviewed by readers on Goodreads? The researchers calculated 20 titles among the top.

The top ranking best seller for readers was Diary of a Wimpy Kid by Jeff Kinney. The book appeared on the bestseller list over 600 times, ranking at an average of #3, and readers gave it an average rating of 4.1 stars on Goodreads.

Interestingly, 11 of the titles on this list are children’s, middle grade, or YA books, and of the remaining titles, six are self-help/productivity books. Given that the NYT List has primarily featured white authors until more recently—and it’s still primarily white in some categories—it’s not a surprise to see that only a small number of the top 20 books are by authors of color.

It should come as no surprise that readers found books which had been adapted to screen among the ones most frequently purchased or read.

Whether by design or by chance, readers have tended to rate the NYT List books higher over the last decade.

Readers ranked fiction titles higher in their ratings than nonfiction, with children’s literature once again being among the highest-rated titles. History and finance books came after, which mirrors what was found in what was seen in the reader’s top picks above.

Science fiction and thrillers, though, tended to garner the lowest ratings among readers.

It’s interesting to see that 37% of the books were rated 5 stars by readers, with 31% being rated 4 stars. A mere 6% were rated one star.

In the last couple of years, the average rating for books on the NYT List was 4 stars. Though this research doesn’t offer the exact list of titles included from the NYT List, it would be interesting to see how the shift in many category lists from being all-white to more inclusive has impacted these ratings. With more diverse reads on the NYT List reflecting the reality of what reader lives look like, it’s likely that increase in ratings comes because of more relatability and inclusivity.

Some of what was seen above, though, didn’t translate when NYT List titles were ranked based on the average Goodreads star rating.

While a children’s book took the top rated spot, it’s worth noting that it’s a book based on a popular television show appealing to both adults and young people. Other books on the top of the list included adaptations—Unbroken, A Storm of Swords, and Just Mercy. Again, since the list of NYT List titles wasn’t made available, it’s hard to determine just when those titles picked up popularity with readers and what role those adaptations may have played.

More interesting, though, are the lowest rated books among NYT List titles. Many of the books are of the spiritual/religious category, as well as books within the YA category. What makes those particular titles especially low-ranking to readers? Perhaps it’s divisiveness for one, and for the other perhaps has to do with adults reading books that aren’t marketed with them in mind.

It’s Been One Week Since You Looked At Me

There are so many books which hit the NYT List for a single week, usually when they debut, and then disappear. Where do those books rank for readers? What sort of staying power do they have in the public eye, if any?

SuperSummary found that a whopping 37% of the over 15,000 titles they analyzed were what could be dubbed “one-week wonders.” That’s a hefty chunk of titles!

The average title stuck around the NYT List for eight weeks.

Once again, children’s literature and self-help/development books ranked about the titles most likely to stay on the NYT List the longest, followed by religious/spiritual and science fiction books. Perhaps this lends itself to the explanation for why the former two are among the lowest-ranked by readers: more exposure leading to more readers picking up the titles and finding them to be not worth the hype.

Nonfiction hung around longer than fiction did, despite being less popular with readers.

What about the books that were the opposite of one-week wonders? Get a glimpse at these books which hung around the NYT List for long periods of time and what readers thought about them.

Ranking at number one and number two are a children’s book and a self-help/development book. Both Diary of a Wimpy Kid and The Five Love Languages were cultural phenomena, and both are still part of the cultural dialog around books both within their respective categories and beyond.

As mentioned earlier, this is a very white-centric list, reflecting the NYT List more broadly over the last decade. Though a couple authors of color appear here, it’s not reflective of the U.S. population and readers more broadly.

It’s not surprising, either, how many of these long-standing bestsellers were adapted into film or television and/or were part of a long-running series of books.

So, How Does The NYT List Stack Up Against What Readers Think?

Readers tend to like the books they read which are NYT Bestsellers. This isn’t entirely surprising, given that these books tend toward a broad audience, have marketing which allows them to reach a broad audience, and many become thickly embedded in pop culture via adaptations.

That said, there are some serious limitations of the study addressed throughout, the biggest of which is how biased the NYT List itself is. Though we’ve certainly seen improvements in representation on the bestseller list, particularly in the last five or so years as publishing has begun to better market inclusive books, the data being pulled from 2008 onward skews the lists utilized for the study white.

Goodreads, while a good source for finding a book’s average ranking by average readers, isn’t without flaws itself. Because it utilizes user-generated reviews, an average starred rating takes into account readers who rate everything with 5 stars, as well as readers who choose to rate books 1 star for any number of reasons, which might not have to do with the book’s content itself.

SuperStudy suggests readers looking for a good book could reliably choose something from the NYT List and expect to be satisfied. This is likely quite true for readers who aren’t heavily invested in the book world; but for those who are—as well as readers who may not be cis het, white, and middle class—it’s likely better options come from more recent lists, the review coverage in The New York Times, as well as resources across the internet and one’s own community.

The entire study can be accessed here.