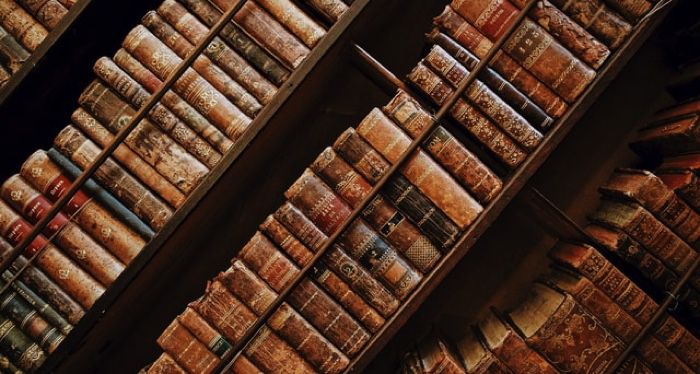 I often find myself idly scrolling the literature auctions of various high end websites, or gently gazing at the spines of beautiful editions in antique shops. Even with my idle scrolling (and absolutely not purchasing, I must note), I’ve started to understand that a book being rare or antique doesn’t necessarily mean it’s valuable, though even a few years ago I would have said these three traits went hand in hand. After all, I reasoned, if there are only a few copies of it, then surely each one is a veritable treasure trove?

A few years ago, standing in the top floor of Sir John Soane’s museum in London, I looked at the Shakespeare folios Soane collected over the course of his life, a feat which today would be very difficult to match. They were beautiful books no matter which way I looked at them, and it was clear to me that their provenance, age, and author all had a role to play in their value.

As Shakespeare texts go, the First, Second, Third, and Fourth Folio are worth a lot of money, inherently valuable because of the man who wrote the words inside them — but also because each of the surviving copies of the folios have experienced significant adventure. The Third Folio, for instance, was published in 1664, with its copies greatly reduced during the Great Fire of London in 1666. The Third is therefore rarer than the Second— indeed, in 2016 when Christie’s sold one of each, the Third sold for more than the Second. The general belief is that just 750 copies of the First Folio were produced, with 200 or so still existing.  For what it’s worth, I’m fascinated that 200 books have survived those four centuries, through all the heave-ho of a world constantly in motion (and indeed, at war).

My high school tattered copy of Othello is simply never going to hit these heady heights of human experience and legacy, even when it becomes a legitimate antique in a few decades’ time. That seems pretty clear for a Shakespeare, but what about a Jane Austen, a James Baldwin, or even an unusual Terry Pratchett?

There are some common principles that can help us determine what’s rare versus what’s truly valuable. Let’s get stuck in.

The Principle of Firsts

As in all walks of life, he who acts first gets rewarded. The early bird catches the worm. You get my point. A ‘first’ is the best chance of locating value early. But even within the term ‘first,’ there are segments.

An author’s first book can be valuable, most especially if they find fame later on. First books tend (though this is not a rule) to have smaller print runs, and as a result, a much-forgotten first project can become a treasure later on. This also goes for first editions, a concept that is broadly known to add value, though in reality this depends on a number of factors, including the number of copies in a print run. After all, if the first edition of a long-anticipated book has five million copies, the market for selling those editions on becomes much smaller: everyone who wants one already has it, so there’s no demand.

This notion of the market is key to working out a book’s value. Supply and demand are vastly matters of opinion in this space, and market makers will keep a close eye to capture the best value they can for items that are considered in high demand.

Firsts aren’t limited to books or editions. The first time a significant character is mentioned, especially in the case of comics, can lend a lot of weight to a high value. Amazing Fantasy #15 features the first appearance of Spider-Man. A CGC 9.6 rated copy— one of just four in existence— sold for over $3m in 2021. If you happen to have some 1960s comics in near-mint condition lying around, you’re sitting on a diamond. Check your attic and basement.

The first time an idea is committed to print can also create value. Think of Darwin’s Origin of the Species, a book of incredible importance for civilisation. The initial print run, in 1858, was 1250 copies. In 2019, one of these sold for £162,500 in Edinburgh.  In another instance, Francis Crick wrote to his son, revealing the discovery of DNA a whole month before it was publicly announced. That letter, rather than any book explaining the detail, sold for over $6m in 2013. In short, if someone in your family is clever, have them write their ideas down. You just never know what it might win you in a century.

It seems pretty clear from the comics example above that condition can play a significant role in determining value. As I wrote this, a CGC 3.0 graded copy of Amazing Fantasy #15 was selling on Ebay for £46,000ish— much more affordable than the $3m near-mint. A snip, you might say!

That said, bindings didn’t really become uniform until the 19th century, so early books aren’t easy to compare to each other. Modern bindings have the benefit of dust jackets, which is where much value accumulates: a perfect dust jacket hardcover copy of a well-loved book is likely to carry much more value than the dust jacket your granny spilled tea on in 1931. Oops.

This ties in with something, as a reader, you might already know: books which are sold following a long stint in the library hold almost no monetary value. They have been too well loved, too often read and too marked, beaten and sloppily handled. Of course, to me this demonstrates their true value incredibly well, but in a market built on money, my emotional love for tatty paperbacks is unlikely to foster demand.

As the years passed, the scarcity of books decreased. Books dating from the 19th century are fairly common, and just being ‘old’ isn’t enough to command a market demand. That’s why flea markets often host collections of books that are plenty old, but plenty worthless for a big time collector. Age doesn’t necessarily equate with value.

World history must also be taken into account. The imprint showing publisher and place of publication can be an interesting thing to look at. Moveable type spread slowly across the globe from Germany after the 15thcentury. It came to America with colonisers, so books published in the same year in London, which adopted moveable type early, and Seattle, which saw the innovation later, might have different values. As before though, this depends wholly on the sense of demand in the market, and might pinpoint rarity rather than value. It’s no wonder people manage to forge entire careers out of rare and antique book sales, given the level of specific detail involved in establishing worth.

Let’s just say it as it is: some books are absolutely gorgeous, and we like that. Beautiful illustrations, very fine bindings, colour plates: they can all add value to a book that’s in demand, like the Ulysses etched by Matisse or (my personal favorite and actually a steal compared to others I’ve mentioned) Harry Clarke’s illustrations for Hans Christian Andersen’s Fairy Tales.

When Sir John Soane was collecting his Shakespeare folios, he purchased at auction a First Folio which had belonged to James Boswell, whose father (also, helpfully, James Boswell) is the renowned biographer of Samuel Johnson. It’s a bit of a subtle connection for someone in 2022, but at the time it was great provenance (and still is, if this sort of thing is your thing). The fact that the book had had such a celebrated owner added to its prestige.

Put it this way: if George Washington had a copy of the Constitution and Bill of Rights and annotated it (which he did), it would be worth more than one he hadn’t owned at all. If you happen to have a book which was owned by someone cool, it might be worth something. This is especially the case if the book they owned was relevant to their own life — in other words, a book about knitting owned by George Washington would be cool, but likely worth less than a book he owned about Yorktown.

We’ve barely touched on the major points of determining book value, but if this hasn’t inspired you to go looking through the family lofts and dusty corners, I don’t know what will.

If you’re interested, you can click to view the gorgeous photographs and lot essays for the 2016 Christie’s sale of Shakespeare’s First Folio, Second Folio, Third Folio and Fourth Folio.