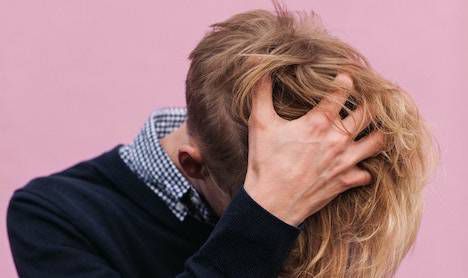 A year ago, I began my first extraordinarily-tentative steps of coming out as non-binary. For the first time, I admitted to myself—and to my Twitter followers—that I did not identify as masculine, and even dropped the phrase “non-binary-type person” into a tweet, but I shied away from fully owning it, because I didn’t want to appropriate anyone else’s identity.

…I genuinely think hurts each and every one of us, but that's prob not saying much, and, besides, I don't really want to be appropriative.

Well, it’s a year later, and, you know what? I’m gonna own the shit out of my identity as as non-binary person. And, by and large, I have comics—and especially my comics pals—to thank for that.

There were two big reasons it took me way too long to come out. First, as hinted above, I worried about appropriating someone else’s identity. I had never really felt like a man, but I wasn’t sure if I was “not-male” enough to really be non-binary myself. In retrospect, it seems obvious that the answer was always yes, but, well, self-erasure and imposter syndrome are pretty common among non-binary folks.

Second, I spent quite a bit of time a few years ago immersed in Foucault’s theory of discourse and the idea that defining something was an act of violence. Even if I basically knew I was non-binary, I worried that putting a name to it would just be replacing one box for another. What I didn’t realize was that while that was theoretically true, even if I refused to put a name to my gender, others were not so accommodating. Besides, the “non-binary” box fits me so very much better than the “man” box ever did.

Of course, getting to those realizations was easier said than done, and that’s where the comics come in… 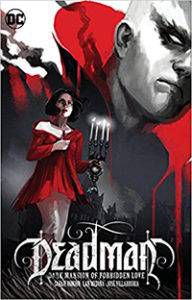 Right around the time of those not-quite-coming-out tweets, DC Comics started publishing an absolutely stellar miniseries, Deadman: Dark Mansion of Forbidden Love. The book is amazing—as I’ve written before—with stunningly beautiful art and a timeless plot that truly shows off what can be accomplished in a contemporary gothic romance comic.

Almost immediately, one of the things that stood out to me was how well the book handled Sam, a non-binary supporting character (and potential love interest for Berenice, the book’s real hero). Sure, we have a moment where Deadman misgenders Sam, but Berenice’s reply—“Ah, Sam uses they/them pronouns. They’re non-binary. Not a woman or a man. Just awesome.”—was just amazing, and I excitedly tweeted it out in all caps.

THIS IS HOW IT'S DONE. pic.twitter.com/0U2CSaaXCe

I loved this book, and I loved Sam. I literally stared at the way Lan Medina and José Villarrubia drew them. In some panels, Sam looked more feminine, in others more masculine, but they always just looked like Sam. I was drawn into them in a way I had not expected, and I anxiously awaited each new issue of the miniseries, hoping that Berenice would ditch her creepy fiancé for them. (It’s gothic romance, so of course there’s a creepy fiancé.)

And yet…I still didn’t quite put together that part of the reason I loved this book—and Sam—so much was that I was non-binary and that I was genuinely excited to find representation of myself in a medium I love. What can I say, I was kinda dense.

The moment of realization came in April when I went to the Chicago Comics and Entertainment Expo, aka C2E2, and got to meet many of my online comics pals in real life for the first time. One of them—a fellow fan of Marvel’s Silk—asked me casually something along the lines of, “As a non-binary person, do you feel more drawn to female characters?” It was as if a lightbulb suddenly went off.

I probably looked slightly awkward for a few seconds, but I pretty much immediately owned it. I don’t remember exactly how I responded—probably something about how I have always felt a stronger connection to female characters and women-focused media—but I do remember for the first time in my life I went along with the non-binary label.

I imagine the conversation looked a lot like this: 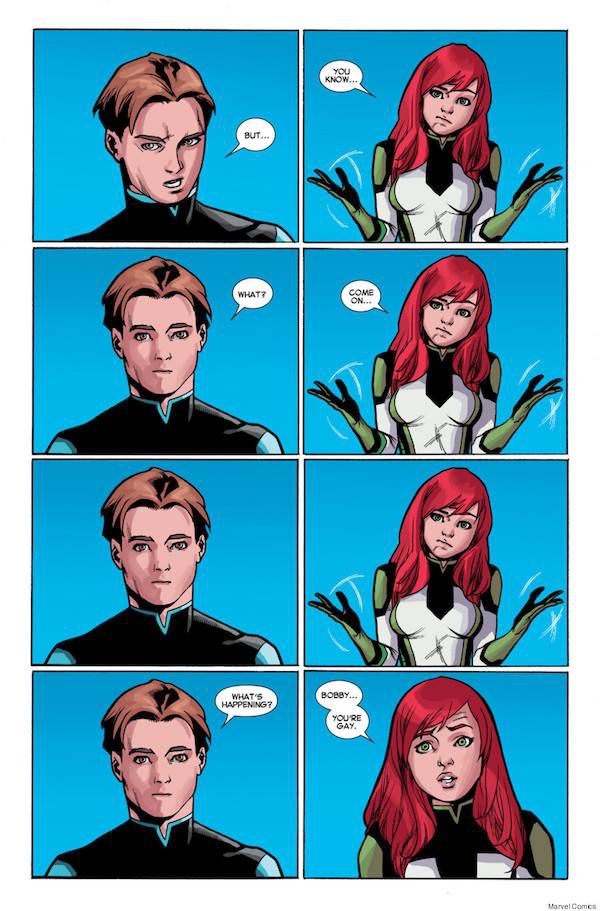 That moment, not my tweets a year ago, started my real coming out. Sure, it took me another month or so to really tell anyone else, but I slowly started reaching out to some non-binary friends from comics Twitter, who were incredibly helpful in so many ways. I cannot thank them enough. 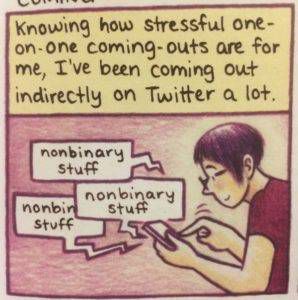 After spending a couple of months doing the “indirectly coming out on Twitter” thing, I eventually took what felt like a huge step and added “non-binary” and “they/them” to my profile. I hadn’t really meant to come out so quickly, but recent developments—especially Trump’s proposed ban of transgender soldiers in the military—made me feel like I needed to stand up and be noticed. If my being visible could help even one other trans or non-binary person out there, I knew it was worth it.

And, hey, there were some other benefits from being out: I made a lot of new friends who understood a lot of what I have been going through. I even managed, while sitting at at the airport in DC waiting for a delayed flight, to start an online non-binary comics book club, the Enby Comics Club, which has given me and others a safe space to talk about comics, non-binary issues, and just life in general. It’s amazing.

Comics might be a dumpster fire much of the time, but I honestly can’t imagine having done all of this without comics and my comics pals. It’s reminded me that this medium and community really can be a force for good in the world.