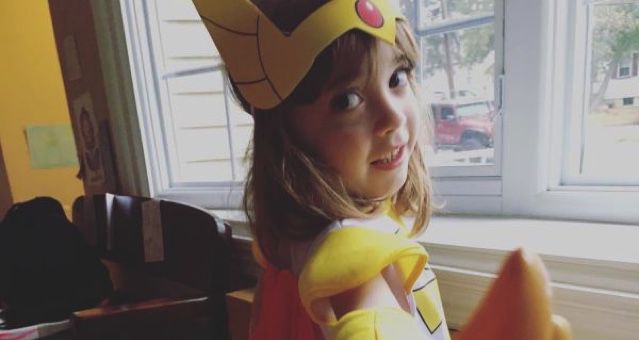 We were standing in line for the DreamWorks She-Ra and the Princesses of Power panel when my five-year-old daughter gasped. I turned around and saw She-Ra. Scorpia. Entrapta. They were each done up in some top-notch cosplay, so well done they could have stepped out of our television screen back home.

Emily, done up in her own She-Ra outfit—procured online because I have zero crafting skills—was dazzled to see her onscreen heroes come to life. She posed for them, holding her shield aloft before her, while the cosplayers cooed over my pint-sized superhero-princess. I felt slightly overcome with the warm fuzzies. 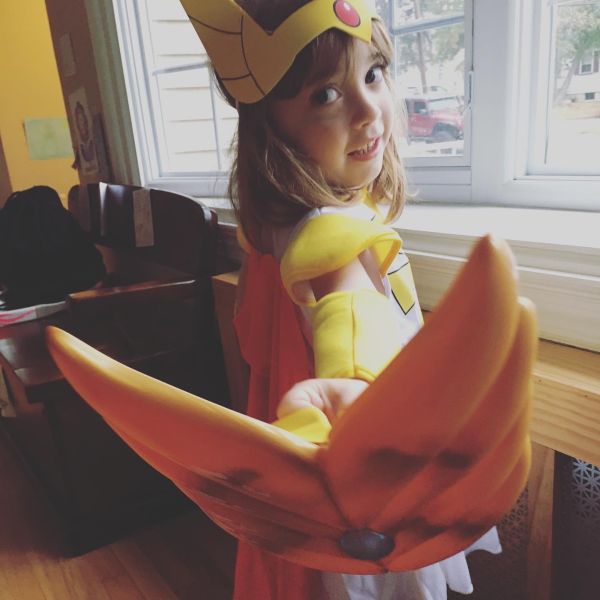 Just a few years before, I’d started bringing Em with me to my local comic shop in order to pick up items from my nascent pull list. At the time, the My Little Pony series caught her eye, leading to an obsession with the Netflix series, and particularly with Princess Celestia. When she was three, she was Princess Celestia for Halloween, and for her fourth birthday party we somehow pulled off a Princess Celestia theme.

As she grew older (by which I mean four and a half), she began peering over my shoulder as I read the latest Unbeatable Squirrel Girl and Ms. Marvel trades. She requested my volumes of Lumberjanes so she could flip through them, one by one, in my home office as I worked. I was thrilled. I gravitated toward comics that featured fierce females solving problems and, when necessary, kicking butt (sometimes while eating nuts). I felt the protagonists in these comics were the perfect role models for my sometimes shy and reserved daughter.

Soon enough, Em was picking out her own issues on Free Comic Book Day, and also getting into her own form of cosplay. She regularly dressed up as the Princess in Black for preschool, and sometimes as Lily from her favorite comic, Mighty Jack and the Goblin King. After seeing an ad for Miraculous in the back of another comic, she became obsessed with the series and began making her own Ladybug outfits out of nothing more than paper and tape, until my husband ordered a full bodysuit (with accompanying accessories) online.

Well someone conned me into reading to her before I could catch up on sleep. #amreading #storytime Photo by @mauteri79

While all of her friends were dressing up as princesses (something she was, admittedly, not immune to), what she wanted most of all, all the damn time, was to play at being a superhero.

So she was really primed for it when one of my favorite comic creators—Noelle Stevenson of Nimona and Lumberjanes fame—came out with a reboot of one of my favorite childhood shows: She-Ra. The mania was instant. And she didn’t let the lack of licensed merchandise hold her back.

So. In the absence of licensed @DreamWorksSheRa merchandise, my daughter has taken to DIY-ing her own stuff. Like, the other day, she created an entire outfit with paper, which she then TAPED DIRECTLY TO HER BODY. pic.twitter.com/Absb967p31

Bringing Em to New York Comic Con this year felt like a no-brainer. Sure, I found the con overwhelming. Sure, there were so many people there that you could only move up and down the rows in slow motion, immersed in a giant crush of humanity. Sure, bringing my 5-year-old anywhere had the potential to stress me out.

But comics had enriched the hell out of my daughter’s life. They’d supercharged her imagination. They’d inspired her to create costumes and artwork and by-god picture books. They’d led to conversations about whether or not superheroes existed in this world, and what that might look like. What their superpowers might be.

“I’m a superhero!” she often shouts as she runs around the playground near our home, asking total strangers if they want to join her and play superheroes, too. Once, one young child insisted that my daughter was not a superhero. Still, Em remained undeterred. After all, she knew the truth.

On Sunday, October 6, I pulled on ripped-up leggings and a Catra dress. My husband braved a Bow costume that bared his belly. And my daughter put on the costume she was born for.

And then we drove into NYC for the con’s family day. I purchased a copy of Ben Hatke’s Mighty Jack and Zita the Spacegirl for Em from the First Second booth. Em spotted some Superhero Girls books in Artist Alley and had the artist, Agnes Garbowska, sign one for her. I bought her a sweet She-Ra sword necklace from the Han Cholo booth. 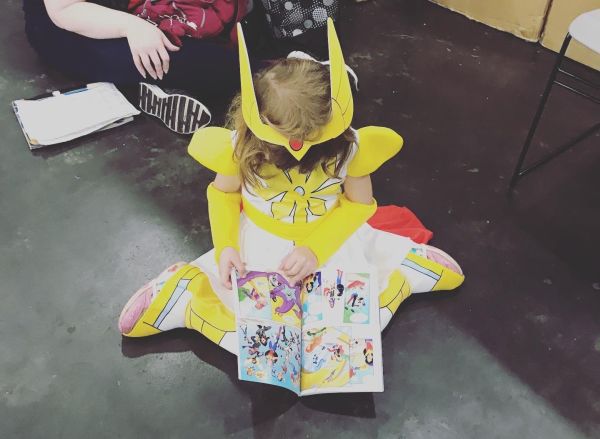 And everywhere we went, people lost their shit over Em. They asked if they could pose with her for photos. They treated her like a superstar. She was baffled at first, but slowly began to take it as her due.

When she saw other girls dressed up as She-Ra, she got excited, went up to them to say hello. When she saw an excellent Mermista cosplayer, she dragged me over there to say hello because, let’s be real, Mermista can be intimidating.

And then, there was the She-Ra panel. Before watching a sneak peek of Season 4 (out November 5, P.S.!), before seeing Noelle Stevenson on-stage with the people who voice Adora, Catra, Scorpia, and Glimmer, they asked all of the She-Ra cosplayers to come up on stage.

We marched across that stage together and, in that moment, my daughter was 100% a superhero princess.

Later on, after we were finally able to drag Emily out of the Javits Center and back to New Jersey, she insisted on remaining in her She-Ra outfit when we went out to dinner. She later spilled a shit-ton of chocolate ice cream all over the damn thing, in all its white and gold glory, but it was okay. I managed to get it all out, and anyway, she was still riding high from her day as a superhero come to life. I couldn’t completely fault her.

I love seeing my daughter like this. And I can’t wait to pass some of my own comics on to her. Comics that will only reinforce the idea that women are strong and smart and fierce and unbeatable and among the best superheroes out there. Hell, I can’t wait to buy her the first She-Ra graphic novel, The Legend of the Fire Princess, out in February. I know that it, and other comics, will only inspire her to create more, inspire her to be her own person.

My daughter has been a reader since birth. How could she not be? But comics? They’ve given her something special.