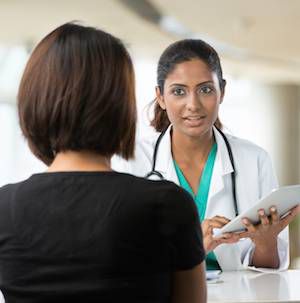 This is a guest post from Sandra Block. Sandra graduated from college at Harvard, then returned to her native land of Buffalo, New York, for medical training and never left. She is a practicing neurologist and proud Sabres fan and lives at home with her family and Delilah, her impetuous yellow lab. She has been published in both medical and poetry journals. Little Black Lies was her debut and The Girl Without a Name is her second novel. Follow her on Twitter @block_sandra.

I never got my MFA. Instead, I went the MD route.

Obviously, a medical degree isn’t the typical path to a writing career. And I’ll admit, this wasn’t my plan going into medical school. Yet oddly enough, my neurology residency ended up being the perfect training for writing psychological suspense.

As neurologists, we peek into brains fairly often. (Not literally, we leave that to the neurosurgeons. All that blood would put us in the horror genre.) But figuratively, we slice that sucker up on MRI or CT every day. Still, the size of the frontal lobe doesn’t tell us much about writing a mystery. That comes from another source altogether – heuristic training.

Or, in other words, the art of asking the right questions.

Let’s say a patient comes in with a complaint of a tremor. This may sound like a specific symptom, but not so. It actually brings up an abundance of possible diagnoses. Parkinson’s may be the first thing that leaps to mind. But that could also be a red herring.

You have to ask the right questions.

How fast is the tremor? Does it occur at rest or with activity? Which part of the body is involved? Then you have to take variables into account. Did the tremor start when the patient was put on steroids? Does Mom or Dad have the same tremor? Is the tremor associated with falls or memory loss?

Medicine boils down to solving human puzzles, and following clues is a complex business. Every week of my residency, we suffered through “Professor Rounds,” an exercise which instilled Stephen King-like fear into us all. One resident would present a case, and the rest had to figure out the diagnosis, or be shamed by the professor. We didn’t waste time on simple problems like migraine or sciatica. In medicine, we call these “horses.” And we were after the “zebras” or more challenging, rare conditions such as nocardia brain abscess, Creutzfeldt-Jacob disease, and the like. The challenge was to trace the symptoms back to the neurological structure involved.

And there were rules. We weren’t allowed to see the MRI right away for instance; that was cheating. We had to figure it out the old-fashioned way, using only the symptoms and your knowledge base.

I still remember the case of a sixty-three-year-old male who woke up one morning with no speech problem or headache, but found he couldn’t add, tell left from right, write, or distinguish the fingers from each other (i.e. thumb vs. pinkie). What do we have here? The patient was suffering from Gerstmann’s syndrome, due to a stroke of the supramarginal gyrus near the junction of the temporal and parietal lobe.

Perhaps this seems pedantic. But there’s good reason for this overwrought academic posturing. Being drilled at Professor Rounds, where the stakes are low, is one thing. In real life when a patient is sick, and a life literally depends on it, getting the right answer matters.

So what does all this have to do with writing mysteries?

Simple. It’s a matter of turning the tables. In learning how to follow the clues, I also learned how to plant them. In learning how to solve human puzzles, I also learned how to write them. All of those ghastly weeks of Professor Rounds turned out to be superb training for plotting suspense. The answers are all hidden in there. Now it’s up to the reader to ask the right questions and trace the clues to find them.

As a doctor and writer, I am inviting readers into a private session of Professor Rounds. And by the end of the story, if I’ve done the job right, they can achieve the ultimate satisfaction of catching the zebra and making the diagnosis.