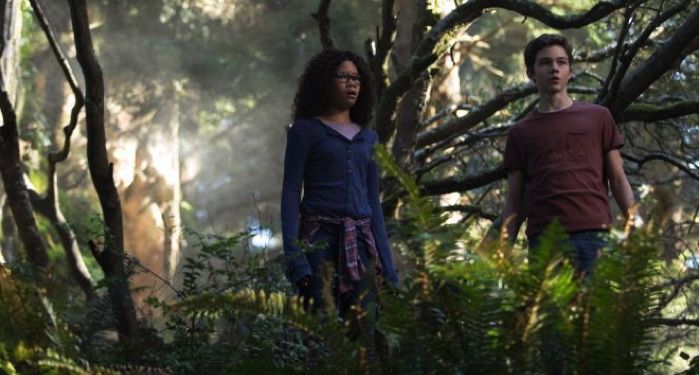 I was in 6th grade the first time that I read Madeleine L’Engle’s children’s classic A Wrinkle in Time. I loved it so much that I instantly insisted that my mom drive us back over to the bookstore so that we could buy the rest of the series, known as the Time Quintet. (We settled on just buying the second one, since my desire to obtain more books than I ever have time to read has been a lifelong issue.) Since then, I’ve learned that most of the novels I devoured in my youth resonated with me in ways I didn’t yet understand, and A Wrinkle in Time was no exception. Still, I recommended it to everyone I knew near and far, and reread it several times in the years following, even though I was probably considered too old for it.

I have also learned that, since entering adulthood, I have always had a very deeply rooted anxiety surrounding growing up. For as long as I can remember, I’ve had a worry that I can’t place about who I am and who I would become, and since I was very ill equipped on how to deal with that anxiety for a long time, I quite literally refused to grow up—for a long time. I purposely kept myself barricaded in an ongoing illusion that certainty exists, aided largely by my favorite fictional characters.

That barricade slowly began to crumble after I turned 18, when other adults started expecting more from me. I wasn’t ready for it. As a result, I flung myself harder than ever into my college schoolwork, purposely overwhelming myself with an outrageously overpacked schedule to distract me from the depressing inevitability of becoming an adult. But no matter where I ran, I always ended up running into myself—a person who had never really known or trusted himself all that much.

In 2018, I was very excited to go see Disney’s highly anticipated adaptation of A Wrinkle in Time in theatres, directed by Ava DuVernay and co-starring the likes of Reese Witherspoon, Mindy Kaling, and Oprah. But the beginning of that year wasn’t especially easy for me: I was starting university, and my mom—my biggest supporter and confidante—was having knee surgery and would be out of commission for months. Oh, and I was horribly depressed.

Having spent the previous two and a half years in college believing that I had to constantly have my schedule packed tight or else the sky would fall, it was a rude awakening to begin university and also suddenly have to confront my own mortality. I’d spent so long running away from growing up, as well as developing crippling obsessive-compulsive rituals to control things I had no business controlling, but now I had nowhere else to run. I was about to turn 21. The jig was up. The illusion was shattered. Adult life had arrived, whether I wanted it to or not.

My mom and I have always enjoyed going to the movies together, especially when they’re Disney movies or adaptations of books she knows I loved as a kid. Obviously I wanted more than anything to go see the Wrinkle in Time adaptation with her in the theatre, but she was barely allowed to take a shower since her surgery at that point—let alone go see a movie. So I went by myself. And I bawled my eyes out.

A Wrinkle in Time isn’t a particularly sad or tragic story, but it somehow represented every single living thing I was going through at that point in my life. Ever since their scientist father disappeared while studying the secrets of the universe when they were young, Meg Murry and her brother Charles Wallace have been hopelessly bullied and belittled by everyone at school. But when three mysterious witches arrive to lead them, along with their friend Calvin, on their own journey through the universe, it’s finally time for Meg to discover and embrace her own inner strength.

I didn’t cry because the story itself was sad; I cried because, despite many years of therapy, I was finally realizing I had nowhere else to hide. It was time to start letting go of my insecurities. It was time to start feeling okay in my own skin. What I hadn’t realized in all of the time I’d spent living in fear of growing up was that by embracing growth, I could leave my former selves and their drama behind. I could start fresh. I could finally breathe.

The film adaptation is somewhat different from the book and received largely mixed reviews from critics, with many commenting that the bizarre story’s message is lost in a sea of special effects with poor direction by DuVernay. While I couldn’t disagree more, it didn’t really matter to me what the general public thought of A Wrinkle in Time. It had merely entertained me as a child, but now it had saved me. It made me start to realize that Friedrich Schiller was right when he said, “Deeper meaning resides in the fairy tales told to me in my childhood than in any truth that is taught in life.” And Demi Lovato was right, on the song for the film’s soundtrack “I Believe,” when she sang, “Tough times don’t last, but tough people do.”