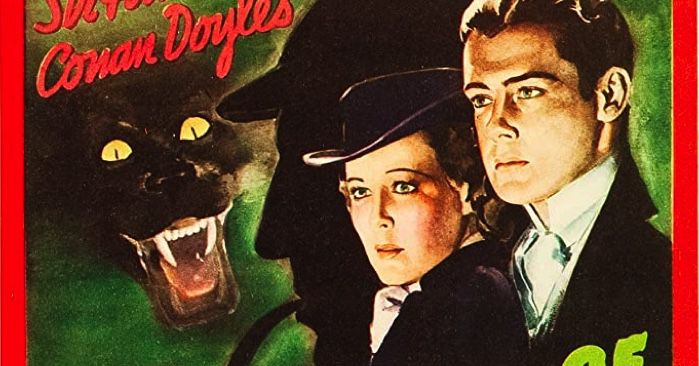 Originally published in serial form from 1901 to 1902, The Hound of the Baskervilles came at an odd period in the history of Sherlock Holmes. The great detective was still presumed dead following his cliffside encounter with Professor Moriarty in 1893’s The Final Problem. But public affection for Holmes was as great as ever, so Arthur Conan Doyle finally caved and gave us The Hound of the Baskervilles, a sordid tale of murder on a moody English moor. Doyle held off on actually resurrecting Holmes for another year—our deerstalker-clad hero wouldn’t return until 1903’s The Empty House—so Hound is set before Holmes’s supposed death.

Whether because readers had waited so long for new material or just because it is far and away the best of the four Holmes novels, The Hound of the Baskervilles remains among Sherlock Holmes’s best-known adventures. Its renown has been magnified by countless adaptations. I would like to discuss some of those adaptations today.

Unlike my article on A Scandal in Bohemia, where I highlighted the adaptations that remained most faithful to the source material, this article will do the opposite. I’m going to spotlight The Hound of the Baskervilles adaptations that went completely off the rails, the ones that took a single glance at the novel and ran screaming in the opposite direction like a mythical hellhound was on their heels. Here they are in chronological order: seven of the most unusual The Hound of the Baskervilles adaptations to ever hit our screens!

This is far from the strangest adaptation out there, but I couldn’t resist mocking Basil Rathbone and Nigel Bruce’s first outing as Holmes and Watson. Sure they’re legends, but their version of Hound made some weird, weird creative decisions.

The movie is enjoyable enough overall, but they stuck a seance in there for no reason, Bruce’s dye job is super distracting, and the finale is watered down to make way for enforced heteronormativity. Also, the film ends with Holmes asking Watson to give him some drugs, which is a choice.

This odd little cartoon drags Holmes (via cryogenic freezing) from the familiar environs of Victorian London to futuristic New London, home to such folks as Inspector Beth Lestrade, Professor Moriarty(‘s clone), and an android that has adopted the long-dead Watson’s personality.

In what is definitely the most far-out take on this story, “The Hounds of the Baskervilles” is set not on the moors, but on the moon. Apparently, it’s common practice for schoolchildren to go on lunar field trips in the 22nd century. That must be a heck of a permission slip. When the children disappear, the moon ghost dog is blamed.

Every once in a while, Hallmark takes a break from pumping out white bread Christmas movies to produce unauthorized Sherlock Holmes adaptations. This is the result.

This version makes some inconsequential changes to the supporting cast, as well as the sorts of abridgments you’d expect from trying to cram a novel into 90 minutes. But the real fun comes from Matt Frewer, who plays Holmes as if he injected a week’s worth of cocaine in one afternoon. He is amazing and hilarious, so it’s extra disappointing that the ending cuts Holmes’s role even more than usual.

My feelings on BBC’s Sherlock are mixed at best, but there’s no denying that they did some wacky things with the source material. Their version of Hound, “The Hounds of Baskerville” from Season 2, is no exception.

Henry Knight comes to Holmes with a strange tale of a monstrous, murderous hound that has roamed Dartmoor for years. So far, so similar. But hallucinogens and a conveniently located military base put a modern twist on this classic tale. And Sherlock admits to having a feeling once in a while, so that’s novel. For this show, anyway.

This adaptation is so far out there that it’s not even an adaptation. “The Hound Named Baskerville” is the last episode of an eight-part Russian miniseries. It features the final battle between Holmes and Moriarty, in which Moriarty embarks on his most brazen scheme yet: to assassinate Queen Victoria. At no point do they go anywhere near a moor or tangle with so much as a peevish Yorkshire terrier.

So why is this episode called “The Hound Named Baskerville?” Because Queen Victoria rewards Holmes for his services by gifting him a dog named Baskerville. That’s literally it. Maybe they figured they couldn’t top the much-loved Soviet adaptation of Hound, in which case, they made the right decision.

Sherlock Holmes and the Hound of the Baskervilles (2015)

This is an amateur production, but a very devoted Holmes fan spent eight months putting together this stop-motion LEGO adaptation, and I think we should all appreciate his efforts and the efforts of his team.

At 42 minutes, it isn’t very long, but it captures the essence and essential points of the story. The many humorous flourishes (Watson punctuates Dr. Mortimer’s most famous line with ominous organ music), the surprisingly touching ending, and the fact that it was all done with LEGO make this one cute Hound. You can watch it on YouTube in English or Czech!

This series was already among the more unconventional versions of Sherlock Holmes. It relocates Holmes to 21st century New York, where he trains and befriends his former sober companion, Joan Watson, in the art of detective work. It’s awesome.

In “Hounded” from Season 4, Henry Baskerville hires Holmes and Watson to find whoever killed his brother Charles, a merciless businessman. Their investigation takes them into the burgeoning world of biotechnology and GMOs, but the murderer’s motive is reliable, old-fashioned greed.

Got a weird The Hound of the Baskervilles adaptation that I missed? Let me know on Twitter!