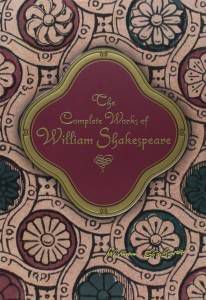 A few times a year, my delightful friend Megan hosts Shakespeare reading parties in her backyard. She took up the mantle from mutual friends who moved away. It’s a tradition that I love.

The parties are rather simple. The host chooses a play. Everyone downloads a specific edition from Project Gutenberg to their kindle, iPad, phone, or other device, so we’re all following the same formatting, etc. We show up with snacks, socialize while we eat and drink, and then crack open our folios. My kids come along and play, usually on their DSes because they are little weirdos who are not interested in Shakespeare or playing outdoors (I suspect they are changelings).

At the top of the act, we begin reading, going around in a circle with each person taking the next character to speak. It’s gender-blind and often results in a single person reading more than one character, frequently with dialogue back and forth with oneself. At the top of the next act, we start over with a new person leading off, and each get a new character (usually–once I ended up reading Claudio in every act). Laughter is encouraged. Struggling with the language and rhythm of the lines is accepted–Shakespearean English can be hard to follow! We are all there to have fun. It’s awesome and you should do it too.

The first thing to do is choose a play. This sets the mood and theme for the event. Ours are often seasonal. Comedies are far easier to read than histories, and tragedies tend to read like comedies. You should go with your favorites, of course! Here are some suggestions by month, some of them better thought-out than others:

January: Twelfth night is January 6th, so Twelfth Night is the obvious choice.

February: For Valentine’s Day, how about a romantic comedy like The Taming of the Shrew, or perhaps the ultimate tragedy, Romeo and Juliet–if you have a dark sense of humor.

May: Othello really must be on this list somewhere, and as I don’t recall it referencing a particular time of year, May is it.

June: Midsummer is June 24th, so I believe we are all obligated to read A Midsummer Night’s Dream and frolic with the fairies.

July: Much Ado About Nothing feels like a good summer play, wouldn’t you agree?

August: The Merchant of Venice, because I had to include it somewhere.

September: How about one of the histories for Back-to-school? Henry V perhaps?

October: Macbeth (The Scottish Play if you’re superstitious) seems the best choice in the same month as Halloween. Spoooooky!

November: I’m going to say Hamlet and you can’t prove it’s got anything to do with ham being a traditional holiday food.

December: The Winter’s Tale is appropriate for the season, is it not? (Seriously, is it? I haven’t read it since the early ’90s.)

Next, you may optionally choose a theme food or drink. You might attempt traditional dishes of Tudor times, in which case The Shakespeare Cookbook might come in handy, or perhaps Shakespeare’s Kitchen. If you want to be even more authentic, and have $$$ to burn, you might try Food In Shakespeare, an academic study on the foods in Shakespeare’s plays. Or you might go for themed dishes more loosely based on the play of the day. A few ideas:

My biggest advice: do not take this too seriously! Shakespeare was a gigantic goofball (who happened to be super good with words). He would want you to have fun.