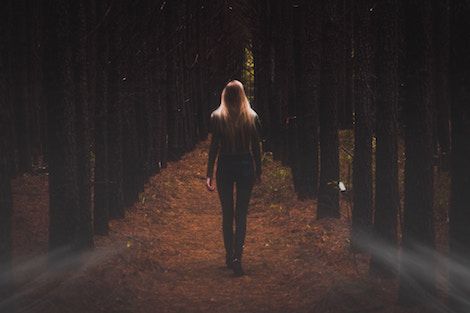 There’s something so much scarier about knowing that you’re watching horror movies based on true stories. I know with me personally, any home invasion movie has me sleeping with two knives, one for each hand, and a string of bells across every egress route. Maybe even a blowdart booby trap. But I digress.

1. The Hills Have Eyes

This film is the first one that scared me for literal years. Although the film itself is a Wes Craven classic, it’s based on the story of the Sawney Bean Cave Clan of Scotland. The legend goes that Sawney Bean and his family robbed and murdered passersby, and then they ate them. Because the clan lived during the 17th century, there’s not enough evidence to prove that the legend of Sawney Bean is true or untrue, which, in the case of crime, in my my mind, means that it happened. If you want to know more about the family, try Sawney Bean: Dissecting the Legend of Scotland’s Infamous Cannibal Killer Family by Blaine L. Pardot.

One of Alfred Hitchcock’s most famous horror movies was based on the true story of Ed Gein, by way of Psycho by Robert Bloch. Bloch chose to keep the gender-identity issues of Gein’s original story. And one murder.

Although Psycho might have been the prototype of horror movies based on true stories of Ed Gein, Texas Chainsaw Massacre even more closely resembles his story—or at least the carnage that was left in his wake. If you take a closer look at some of the photographs from the crime scene in Gein’s house, you definitely can see the resemblance. You can also see the very barely changed mask of Leatherface. For a total-package true crime read, check out Deviant by one of my favorite crime writers, Harold Schechter.

4. Silence of the Lambs 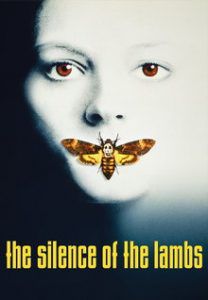 Yet another film inspired by the horrorshow of Ed Gein’s crimes, Silence of the Lambs by Thomas Harris retells the story in a more modern setting—or rather, he re-fictionalizes parts of Gein’s story. Two motifs always stay throughout these retellings, though: the killer always has some sort of gender dysmorphia, and body parts of his victims are always somewhat repurposed. If you like the authenticity of the FBI’s portion in this film, you might also check out the book by Thomas Harris’s consultant, Robert Ressler, Whoever Fights Monsters: My Twenty Years Tracking Serial Killers with the FBI.

Note: You can also listen to a super funny analysis podcast about this film, Everything Trying to Kill You. (Double note: the author is a co-founder of said podcast).

5. Deranged: Confessions of a Necrophile

I promise, this is the last film on this list that was inspired by Ed Gein—he very loosely inspired this film. In fact, Ed Gein did not experience necrophilia. The antagonist in this film, however, has an overt fascination with death and corpses, which is an artistic decision more than a true-to-life horror film. 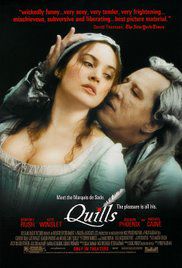 This horror movie is based on the true story of the Marquis de Sade. You’ve heard of Sadism? They named it after him. This film takes place when he is in the asylum to which he was confined for his sexual deviance. The books on which this film is based are those that he wrote, Justine and 120 Days of Sodom. How much of his novels are based on his own perverse crimes is not known exactly, but the resemblance to the sex workers he was accused of killing to those in his stories is…close.

7. The Town that Dreaded Sundown

This movie is also based on an urban legend that is based on a true story. You’ve heard the story of the couple who goes parking, and while they’re on make-out lane, the radio broadcasts an escaped murderer with a hook for a hand? That urban legend is based on the the six unsolved Texarkana Moonlight Murders committed by the Phantom Killer. The murders really happened, and they’ve never been solved. If you’re interested in this story, the two most notable books are The Texarkana Moonlight Murders: The Unsolved Case of the 1946 Phantom Killer by Michael Newton and The Phantom Killer: Unlocking the Mystery of the Texarkana Serial Murders: The Story of a Town in Terror by John Presley.

Audrey Rose the film was inspired by Audrey Rose by Frank De Felitta. It’s a scary story in which a man believes his dead daughter has been reincarnated in the body of another little girl—and the scariest part is perhaps this story’s inspiration. The author based this premise on the time that his young son started to suddenly play ragtime music on his piano. 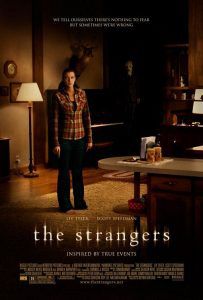 This film is the epitome of a home invasion story, and what home invasion story is more horrific than that of the Manson Family Murders? Although not a shot-for-shot retelling by any stretch, The Strangers bases SOME of its horror on the crimes detailed in the true crime book Helter Skelter by Vincent Bugliosi and Curt Gentry.

10. Henry: Portrait of a Serial Killer

This is one of the most interesting horror movies based on true stories because although the narrative is somewhat fictionalized, this low-budget film tells the story of serial killer Henry Lee Lucas and his accomplice, Ottis Toole. (Yes, Ottis. The film changes his name to “Otis,” but IRL, his name was “Ottis.” Yikes.) This true story is just as harrowing, if not—like true stories can be—more so. There are MANY books about Henry Lee Lucas, the “confession killer,” the man who confessed to killing 600 people but was only convicted for 11 murders. Some of them include Confessions of Henry Lee Lucas by Mark Cox, Henry Lee Lucas by J. Norris, and Hand of Death by Max Call.

The Girl Next Door by Jack Ketcham and its film adaptation are loosely based on the torture and murders of Sylvia Likens and Gertrude Baniszewski during the summer of 1965. It’s hard to watch and hard to read.

Something about serial murders from a long time ago and in a faraway place makes them more watchable—there’s some solace in knowing that even if the killer was never caught, there’s no way he’s still alive now. Such is the case with the infamous Jack the Ripper. This movie is adapted from the graphic novel From Hell by Alan Moore.

This is one of the horror films based on true stories that stays very close to the original events. It’s told in reverse order, which is interesting, and the names of the victims have been changed for privacy and respect. Jeffrey Dahmer is one of America’s scariest serial killers. Many books have also been written about him, but here are a few notable ones for those who want to know more about the facts: Jeffrey Dahmer: A Terrifying True Story of Rape, Murder & Cannibalism by Jack Rosewood, The Jeffrey Dahmer Story: An American Nightmare by Donald A. Davis, and Jeffrey Dahmer: The Gruesome True Story of a Hungry Cannibalistic Rapist and Necrophiliac Serial Killer by Ryan Becker.

Tobe Hooper based this horror film on the true story of the Alligator Killer, Joe Ball, a serial murderer in Texas in the 1930s. Although his story was long thought to be folklore, you can read more about this atrocity in the Kindle book Joe Ball: Unauthorized & Uncensored by T.J. Carlson. 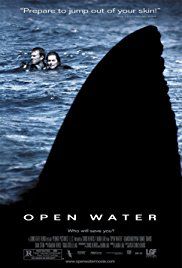 This film is based on the disappearance of Tom and Eileen Lonergan, a couple who disappeared during their scuba diving trip off the coast of Australia in 1998. Their bodies were never found. 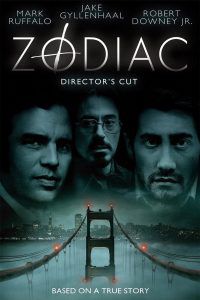 There is some dissent on whether David Fincher’s 2008 film, Zodiac, about the infamous Zodiac Killer, is its best rendition, but I liked it. (I like most period pieces…they have the style right, but the film quality is better.) Another honorable mention, an adaptation of Zodiac: The Shocking True Story of the Hunt for the Nation’s Most Elusive Serial Killer by Robert Graysmith, is The Zodiac Killer, from 1971.

This is another of the scariest horror films based on true stories. You’re probably familiar with the 2002 adaptation of the novel of the same name, The Mothman Prophecies: A True Story by John Keel. Both are based on the true events of two couples in the mid-1960s who saw a being with its eyes in its chest, the mothman. Hundreds of residents in the same town, Point Pleasant, West Virginia, reported similar sightings. (Not going to lie: this film gave me waking terrors when I first watched it!) 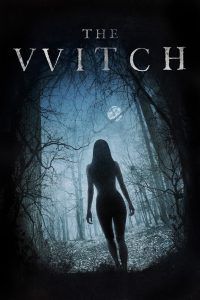 So, most people will disagree that Robert Eggers’s 2017 film The Witch is based on a true story, but nearly all of its dialogue was found in journals and testimonies of the 1700s New England colonies. Whether we believe these stories are not, the people to whom these supernatural events occurred definitely believed in the evil they saw.

19. The Serpent and the Rainbow

The 1988 film was a horror movie set in Haiti. The Serpent and the Rainbow: A Harvard Scientist’s Astonishing Journey into the Secret Societies of Haitian Voodoo, Zombis, and Magic by Wade Davis, the book, details an ethnography of Haitian culture, zombis, voudoun rituals, and celebrations.

This horror movie is based very loosely on the true story of Adolfo de Jesús Constanzo, “the leader of a religious cult that practiced human sacrifice.” In the film, as in life, college students are kidnapped and murdered.

21. The Exorcism of Emily Rose 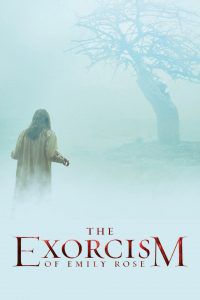 This film is based on the true story of Anneliese Michel. According to Amazon, the book The Exorcism of Anneliese Michel by Felicitas D. Goodman is best described as follows: In 1976 a young German girl named Anneliese Michel underwent a series of exorcisms. The rites were administered by two priests of the Catholic Church to free Anneliese of the six demons they believed possessed her. Seemingly as a result of the exorcisms, the girl died. Worldwide publicity followed when the girl’s parents and the two exorcists were brought to trial and convicted of negligent homicide. Here a noted anthropologist offers her own interpretation of the exorcisms of Anneliese Michel. 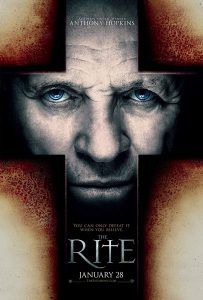 Mikael Håfström’s 2011 film is one of the horror movies based on true stories that deals directly with demons and possession. Its basis is the book, The Rite: The Making of a Modern Exorcist by Matt Baglio. In it, Baglio, a journalist, details the process of training priests to exorcise demons.

Ti West’s 2013 film The Sacrament is based on one of the most horrific and famous religious cults of all time, the Peoples Temple. That’s Jonestown. If you want to know more about the Jonestown Massacre (and why Kool Aid—but honestly, it was FlavorAid—is such a terrible running joke), read The Road to Jonestown: Jim Jones and Peoples Temple by Jeff Guinn or A Thousand Lives: The Untold Story of Jonestown by Julia Scheeres.

After the violent DeFeo family murders, their house stood vacant for 13 months. This is the part that is definitely true. You can read about it in The Real Amityville Horror: The True Story behind the Brutal DeFeo Murders by Frances J. Armstrong. The novel (and its film adaptation by the same name), The Amityville Horror by Jay Anson, however, details the alleged hauntings that the family who moved into the vacant house experienced. They got a great deal on the house, apparently, but at what cost?

What do you think? Would you move into a murder house? And, what are your favorite horror movies based on true stories?