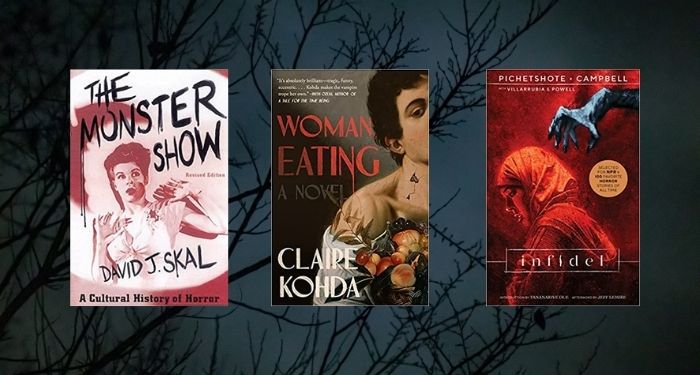 After reading an advance copy of Claire Kohda’s Woman, Eating back in October (don’t worry; it’s finally out next month), I did what I usually do when a book sticks with me: I fangirled all over the damn place, mentioning it on a forthcoming podcast, including it in my annual favorite reads list, and also shouting it out in a post on horror for foodies. Later, in a private message to Kohda, I told her that I was so delighted to have a new voice in horror lit.

“Tbh, when I wrote it, I felt like I was just writing about a person, not a vampire!” she said. “I completely forgot that she was born out of horror. She just feels like a friend.”

I loved that. And I could see it. Sure, the protagonist of Woman, Eating is a young vampire who struggles to feed herself when cut off from her usual food source. But deep down, the book is actually about a woman striking out on her own, seeking independence and belonging and love and a sense of identity.

At that moment, it dawned on me that some of my favorite works of horror these days are those in which the supernatural elements of the genre are incidental to the core of the story. As someone who, as a child, fell in love with horror via a monstrous sewer clown who fed on the fears of children, I wondered why this was.

The Purpose of Horror

The boundaries between genres can be blurry AF (see my recent post on dark humor and also the spotty labeling of books as thriller versus horror) but, in an academic review published in 2019, the authors write that horror is the only fictional genre created to “elicit fear consistently and deliberately rather than sporadically or incidentally.”

The methods by which authors and filmmakers accomplish this vary widely, as do the theories that exist around why we so willingly consume and enjoy horror.

One viewpoint that resonates with me is from author and editor Shawn Coyne, who posits that horror acts as “an allegory for the horrific world we presently or could soon inhabit. It serves as a prescriptive or cautionary tale about how to best metabolize our darkest fears and survive.”

As editor Rachelle Ramirez writes for Story Grid (after presenting the above quote), “Horror stories ask which will win in the end: hope or hell? Horror stories serve as a metaphor for the underlying brutality of our lives, allowing us to feel like we are fighting back.”

The above tracks…at least for me. Last year, I wrote a piece for Southwest Review about my love of horror, and about how the horror I tend to love most feels intertwined with my fears as a mother.

In that piece, I traced the evolution of the various types of horror I’ve enjoyed throughout my life, noting that a preference for hidden supernatural worlds and twist endings eventually gave way to an inclination toward psychological horror and claustrophobic horror.

The film I used to illustrate this was The Descent (very different from the book), a movie in which a group of female spelunkers becomes trapped in an underground, uncharted cave system. The monsters that eventually appear in the film seem beside the point. Instead, the dread that rises within me as I watch it (even still) is due to the sense of claustrophobia I feel at the protagonists’ situation. It’s a sense of claustrophobia that sometimes dogs me as a wife, as a mother, as a woman.

In the above-mentioned academic review, the authors mention that younger children tend to be more afraid of symbolic stimuli. As they get older, their fears shift, focusing instead on more concrete or realistic stimuli. Related research that focuses on adults is limited, but I can only imagine that for those of us who remain in thrall to horror, our fears become ever more grounded in our personal circumstances.

Horror as a Reflection of Societal Fears

Building on the quotes from Coyne and Ramirez, cultural historian David J. Skal wrote in his book The Monster Show that horror is a reflection of our societal fears, an outlet through which we can release our anxieties while simultaneously escaping from them. Research shows that, within the genre, we can face these fears, knowing we are in a safe, controlled, no-risk environment.

I see this in recent horror films like Jordan Peele’s Get Out, which uses the genre to create a social critique on white liberal ignorance and entitlement, slavery, and the lack of value we place upon Black lives.

It exists also in so many of the horror titles I’ve enjoyed these past few years. In Chelsea G. Summers’s satirical A Certain Hunger, the story about a cannibalistic serial killer is really a story about sexism — in male-dominated industries and in the way we view female desire. In Pornsak Pichetshote’s Infidel, there are evil entities, yes. But the comic series is really about xenophobia. In Rachel Yoder’s Nightbitch (not necessarily horror, but still filled with the uncanny), the monster is motherhood, not to mention the lack of systemic support for unpaid family caregivers, and the gender disparities that exist within said caregiving.

And Victor LaValle in particular kicks ass at this. In the first book of his that I read, The Devil in Silver, there existed so much uncertainty around whether the monster in question actually existed. Instead, readers were forced to interrogate themes like faith, race, class, madness, and those we allow to disappear. Later, when I read Victor LaValle’s Destroyer, a comic series about the last descendant of Frankenstein, I was again called to confront the casual racism at the heart of our society, and the fear and fury so often wrapped up in motherhood.

The Many Flavors of Horror

Again, authors and filmmakers employ many tactics when it comes to instilling fear in others. Monsters. Devils. Ghosts. Supernatural…weirdness.

But what really gets me going are those things that are slightly more indefinable: the upending of common tropes, the unexpected, the embodiment of evil, particularly when it comes with a familiar face.

And sure, give me a cult or some light witchcraft. I enjoy that, too.

Right now, I’m making my way through Netflix’s Archive 81, a limited series starring Mamoudou Athie in a role much different from the one I saw him play in 2017’s charmingly quirky Unicorn Store. I am loving this show, about an archivist who takes a job restoring damaged videotapes only to find himself pulled into a mystery about a missing director and a mysterious cult. Cults and supernatural phenomena aside, what’s really grabbing me is the mystery around the protagonist’s own past.

And then I’m also in the middle of Quan Barry’s We Ride Upon Sticks, which has been labeled as both sports fiction and occult horror. (Oh, genre labels.)

In it, a field hockey team turns to witchcraft in order to turn around a long-running losing streak. Nearly halfway through, I still can’t tell whether the witchcraft is real or just mere coincidence. The girls go about it in such a haphazard way.

But I don’t even care because, as I learn more about each team member, I find that the real literary gold is in the way readers are given a picture of girlhood in all its many dimensions, with themes of friendship, race, sexuality, gender, faith, transformation, and more threaded throughout.

If the magic turns out to be not real, the book will have lost nothing.