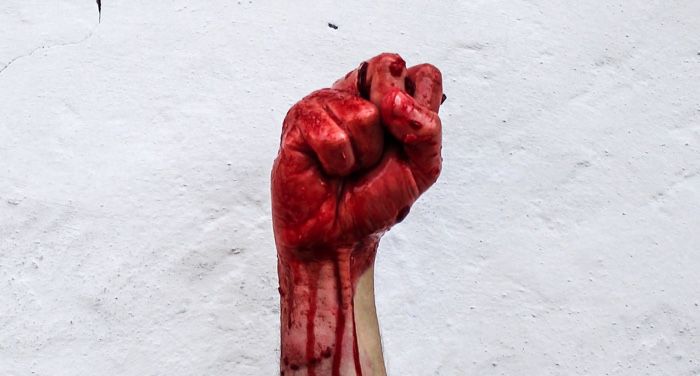 This post on horror inspired by Elizabeth Báthory was originally published in our horror newsletter, The Fright Stuff. Sign up for it here to get the latest and greatest from the world of horror!

In hindsight, I should have used this topic for the Valentine’s Day Fright Stuff. I mean, what’s more romantic than an extremely attractive woman who may or may not be a vampire but is definitely bathing in the blood of young women and probably seducing them as well? I don’t know what is, but Báthory-inspired horror just makes me think of Valentine’s Day!

As a life-long vampire fan, I have a soft spot in my heart for stories inspired by the dark history of the “Blood Countess.” But let’s be fair here for a second: like most powerful but maligned women in history, much of the gruesome legend that surrounds Elizabeth Báthory is now thought to be little more than slander by her enemies. Just as her crimes were most likely a front used to strip her of her influence and independence. There’s a lack of eye witness evidence that would be alarming by modern standards, and it’s no coincidence either that one of the aspects of Báthory’s punishment for the alleged murders was the removal of all the extremely valuable holdings she gained control of following her husband’s death. (Can’t have that, now can we.)

There aren’t a ton of resources I could find about Báthory that seem at least plausibly credible – one of the downsides of having your legacy defamed by history, apparently, is that your story attracts a lot of oddity and not a lot of scholarly attention. There seem to be a few history books out there that might be worth tracking down, but really it’s slim pickings. This lack of options will also be made apparent later with the books I’ll discuss. Unfortunately, not many of them are written by people of color. If you want to learn more about Báthory, though, I recommend that you check out folklore blogger and podcast host Icy Sedgwick’s fascinating podcast episode debating the truth behind the legend. It was a huge help this week!

Still, despite the likelihood of her innocence, Elizabeth Báthory’s infamy (however fictional) has outlived whatever her true story may have been. And not unlike the historical figure that inspired Bram Stoker’s famous vampire, the fictional version of Báthory is more likely to live forever than the woman who inspired her. The reality of it is a bit sad (and a bit rage inducing), but at the same time, people love a story. And a beautiful murderess who bathed in the blood of hundreds of young women is quite a story.

So while we give a nod to the much defamed historical Báthory, who deserved better than her fate, in this week’s Fright Stuff, we also raise a glass to her bloody fictional legacy. They tried to destroy her, but you can’t keep a bad bitch down. And we’ll be remembering Elizabeth Báthory, in one form or another, long after their names are dust. Though history knows her as Anna Darvulia, the Blood Countess’s witch companion, at the beginning of Popović’s book, Anna is just a scullery maid brought on to work in the castle of the glamorous, beautiful Countess Elizabeth Báthory. When Anna catches the Countess’s eye, she finds herself elevated above her station to the role of the Countess’s personal maid and companion. A confidante. Ultimately, her plaything, as Anna soon finds herself drawn deep under the Countess’s influence and isolated from everyone she knows and loves. The prisoner of a murderer. And Anna knows that being Elizabeth’s pet will only spare her life for so long before the Blood Countess eventually turns on her as well. When I Arrived at the Castle by Emily Carroll

When I Arrived at the Castle is a brilliant work of Gothic, erotic horror, rendered in Carroll’s favored white, black, and red palette. In this retelling, a young cat-like girl arrives at a dark castle on a story night on a mission to destroy the evil within. Too many girls have come before her, never to be seen again, and the beautiful woman at the castle door hides a monster behind her face. When I Arrived at the Castle is definitely strange and unexpected in the best ways. It’s also queer! In fact, I should point out, that all three of the titles on this list are queer horror.

Caveat: While I was putting this newsletter together, I made the disappointing discovery that apparently When I Arrived at the Castle is out of print. I choose not to take it out of the newsletter because, again, I find Carroll’s work brilliant, and worth the effort to track down. And, thankfully, we have libraries and the glorious power of inter-library loans! The wait to October is going to be SO long, because I am already dying to get my hands on Alexis Henderson’s new queer, Gothic horror novel, inspired by the Báthory legend. Seeing it as her only means of escaping the city and poverty she was born into, Marion Shaw answers a newspaper listing to be a bloodmaid for a wealthy noble woman in the north. A servant in the infamous House of Hunger, presided over by the seductive and beautiful Countess Lisavet. When Lisavet fixes her eye on Marion, it seems Marion’s fortunes are on the rise, but a string of disappearing bloodmaids throws Marion’s new life into chaos. She finds her self drawn into a dangerous game that may well see Marion numbered among the missing herself.