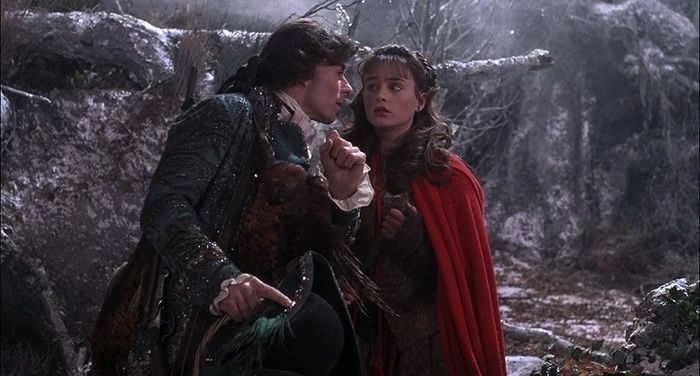 “What big teeth you have! All the better to eat you with. The girl burst out laughing; she knew she was nobody’s meat.” When I read this line for the first time, I knew that I had found my research topic. Sixty pages, two semesters, and one exhausted advisor later, I would finish my undergraduate thesis on Angela Carter’s The Bloody Chamber.  This collection of bloody, erotic, feminist fairytales can be found a touchstone in many compilations of modern fairytales and feminist lit. There’s a good reason for that. I finished my thesis nearly two years ago, but I still find myself wondering what else I can learn from Carter’s work. 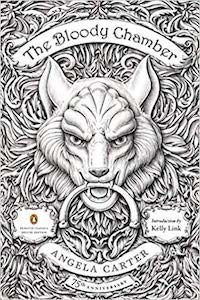 Sex and power have always had an uncomfortably close relationship in our collective consciousness. With E L James’s Fifty Shades of Grey being a household name now, it’s safe to say that this relationship has been a hot topic the last few years in particular. Of course, E L James wasn’t the first to play with power and control in her romance novels. Anne Rice’s The Claiming of Sleeping Beauty and Anne Desclos’s Story of O were some of the forerunners of the work that populates the romance section of your local Barnes & Noble.

There are two key features that define The Bloody Chamber. First, sexuality is an undercurrent in nearly every collection in the story. Second, her work is disturbing. At times, it’s very disturbing. These seemingly opposing traits are exactly what makes the book so evocative. The title story, based on Charles Perrault’s “Bluebeard” folktale, exemplifies this tension. In this narrative, the protagonist barely escapes being murdered by her husband, who has killed his previous three wives. Carter goes into as much detail when describing the bodies of the murdered wives as she does describing the narrator’s loss of virginity to her husband. This sort of juxtaposition is the norm in the collection. In each story, desire, power, and fear intertwine.

Likewise, anxiety about sexuality and the imagery of engulfment are also combined in the collection. This is particularly visible in “The Erl-King,” a story based on a poem by Johann Wolfgang von Goethe. In the story, the protagonist dwells on her attraction to a fae figured called the Erl-King. The Erl-King captures women who stray into the woods and transforms them into birds that he keeps in cages. Despite this danger, the protagonist allows him to seduce her. Throughout the story, she struggles with the complicated feelings he evokes in her. She says his touch “consoles and devastates her,” calling him a “tender butcher.” While she claims she is “not afraid of him,” she says she fears “the vertigo with which he seizes” her. Her fear is less of him so much as of desire itself. “There are some eyes can eat you,” she says.

In Reading Color Newsletter
A weekly newsletter focusing on literature by and about people of color!
Thank you for signing up! Keep an eye on your inbox.
By signing up you agree to our terms of use
https://mashamorevna.tumblr.com/post/149049159103/graphic-set-of-the-bloody-chamber-and-other

While some of these stories are hard to swallow, Carter’s feminist fairytales often show her women as empowered in their surreal sexual encounters. My favorite example is in “The Company of Wolves,” perhaps the best known story in the collection. In this story, the protagonist is a young woman who “has a knife and is afraid of nothing.” She is described as not knowing “how to shiver.” Despite being a virgin, she is far from an ingénue.  She laughs in the face of the threat of being devoured by the wolf.  At the end of the story, this protagonist casts her eponymous red cloak into the fire and ends her night between the paws of a “tender wolf.” Just don’t worry about what happened to Grandma, and it’s ultimately a happy story.

Reading this collection leaves you uncertain exactly what Carter wants you to feel. For instance, in “The Tiger’s Bride,” a young woman’s first sexual encounter with a half-man half-beast causes her skin to split, revealing a hidden tiger within her. Taken out of context, the scene could easily seem to be about oral sex. However, Carter’s emphasis on the animal physicality of the man-beast is just as apparent as the sexual undertones. Although the stories are too surreal to ever step into the truly graphic, sex and violence are the twin veins that unite the collection. Carter never allows you to become comfortably immersed in an erotic scene. She pairs every sexual scene with a slight shift in tone or subtly discomforting image. For instance, in one story the protagonist strangles her lover with his own hair because (spoiler!) she fears her own desire for him.

There Are Some Eyes That Can Eat You

In recent years, monsters have been sexier than ever. Stephanie Meyers’s Twilight series and Charlaine Harris’s Sookie Stackhouse books are just a few examples of the paranormal romance genre that’s been going strong for the last decade. Carter’s stories are unique because she leans into the potential that comes from the combining seemingly disparate subjects. Her work shows that erotica and horror—two genres specifically meant to evoke a distinct and bodily reaction from the reader—can play against each other to ask important questions: What scares us? What excites us? And where do these two things overlap?

That said, categorizing The Bloody Chamber as simply a collection of feminist fairytales doesn’t give the work due credit. Carter plays with many thorny topics, including virginity, imbalanced power, and sadomasochism. Additionally, Carter was poking at these ideas during the height of second-wave feminism. During this period, discussions of pornography and consensual power exchange were fraught. Unsurprisingly, Carter’s work garnered mixed reception from the feminist community. In The Invention of Angela Carter: A Biography,  Edmund Gordon goes into depth discussing how many enemies Carter made in feminist circles throughout her career, despite Carter’s own frequent assertion that she was a feminist.  Still, her work provokes important discussions about the relationship between sex and power.

As the protagonist in the titular story finds when she opens her husband’s private chamber, sometimes there are things we realize by prying too deeply into our desires that are impossible to unlearn. Angela Carter draws attention to what is beastly in human nature—the desire for power or to give it up, to dominate or be consumed, to be uninhibited in all the worst and most wonderful ways. When reading her work, we must confront both what is inherent in us and what is inherited without our knowledge. Through doing so, she gives us the chance to challenge our own beliefs.

Although Carter’s feminist fairytales don’t pull their punches, many of her women do come to reconcile their complicated desires and end up happy. They just might become literal beasts in the process. There is no overtone of moralism or piety to her work. Carter says simply: don’t get too comfortable. Don’t stop questioning your desires. Don’t give them up, either. And never look away. After all, you are nobody’s meat.