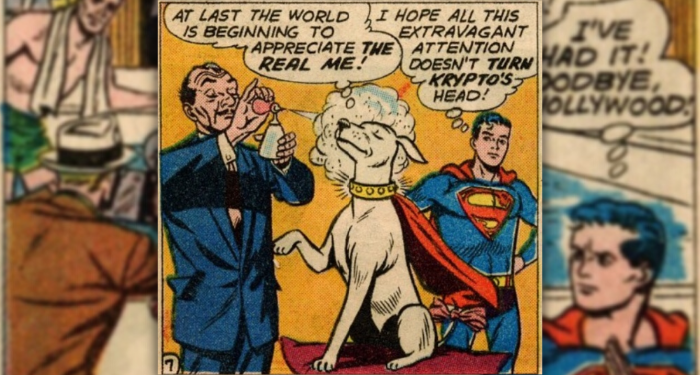 Almost everyone dreams of big-screen stardom at some point in their lives, and it turns out superheroes are no exception. When Hollywood bigwigs come a-knockin’ with grand plans to build their next blockbuster around someone’s super-exploits, our heroes are usually more than happy to oblige — if only so they can donate their salaries to charity. Heaven forbid they show a modicum of pride or ambition!

Superhero movies have become big business in the past few decades, but going by these comics, such films were all the rage in-universe long before the MCU was a glimmer in Disney’s eye. Heroes who are just now getting their shot at the big screen in our world had feature films decades ago in their own universes. As you can see from these comics, these movies didn’t always pan out so well, but not for lack of effort on our heroes’ part…usually.

In any case, these comics definitively prove that watching buff, attractive people (or fuzzy little animals) in capes is a popular pastime in both the real world and the comic book world. So let’s take a look at what heroes do when they discover Tinseltown is every bit as dangerous as their home turf!

In Flash #118, Mammoth Studios asks our hero to head on out to Hollywood to perform the stunts for a Flash movie. While there, the real Flash learns that the actor hired to play him has been the target of some dangerous on-set “accidents.”

In a shocking twist, it turns out the actor himself is responsible for the accidents. His plan was to manipulate Flash into taking his place in the film, kill him in one of those “accidents,” and then pretend to be the Flash so he could cash in by charging for media appearance and product endorsements. This is not a well-thought-out plan by any means, but not every actor can be as smart as Hedy Lamarr.

Hey, superheroes are busy people: they can’t respond to every Hollywood hack who picks up the phone! So in Thor #394, after failing to get in touch with the god of thunder through his Avengers buddies, a determined screenwriter embarks on her own journey to get to know Thor.

She flies out to New York and speaks to a bunch of people who have seen Thor in action over the years. Some have flattering things to say about him and some definitely do not, but it’s all for naught anyway: the studio scraps the film in favor of a cartoon series starring an anthropomorphic dog as Thor. I’d watch that.

Have I Love Lucy-Style Shenanigans

One fine day in Wonder Woman #133, Diana is disturbed to see a news headline stating her boyfriend Steve Trevor has inexplicably agreed to star in a movie called Amazon Girl with the mysterious Miss X, who is so amazingly talented that she is guaranteed to make the real Wonder Woman a “has-been.”

Miss X, however, does not exist: she is a marketing ploy. The studio gets Wondy to agree to pose as Miss X to keep up the charade. She is so convincing that she tricks fickle Steve, who falls head over heels for Miss X because, among other reasons, her skin is so much clearer than Diana’s, apparently. Anyway, the movie set collapses, forcing Wondy to “arrive” and save everyone, which makes Steve fall in love with her again.

Make a Career Out of It

Few superheroes have had a career as eclectic as Simon Williams. He started out as a failed inventor convicted of steal Stark Industries’ designs. He then became the villainous Wonder Man before changing sides and becoming the heroic Wonder Man. And then he went Hollywood and became an actor who did all his own stunts. Why not? He’s invulnerable, after all!

Williams’ movies weren’t much to write home about: they were often the kind of cheap, hokey garbage that Marvel’s version of Mystery Science Theater 3000 would cover. (Marvel, please call me, I want to write that comic.) In Iron Man #313, we see him in a Conan-style flick wearing a ratty loincloth and a giant skull at his hip. Nothing but class for our Simon.

Fail to Make a Career Out of It

Krypto the Superdog is hitting the big screen in this year’s DC League of Super-Pets. So I’m sure you’re not surprised that he was considered quite the box office draw in the comics as well — specifically, Adventure Comics #272.

In this issue, Krypto stumbles into Hollywood stardom and quickly lets it go to his head. He won’t even stop giving autographs long enough to save a fellow dog. In a measured and reasonable response, Superboy spikes Krypto’s swimming pool with kryptonite, causing him to turn old and feeble until he learns some humility. Here’s hoping the upcoming animated film doesn’t go to Krypto’s head like that!