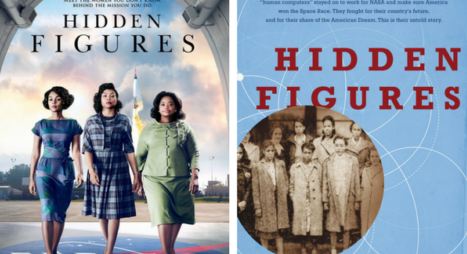 While watching Hidden Figures my eyes often filled with tears, with many scenes clogging my sinuses. By the end, I could only breath through my mouth. I’m not a guy who cries, but a good movie can make me so misty-eyed I can’t see. This movie did a number on me – I loved it.

Then I read the book.

Hidden Figures by Margot Lee Shetterly is one of the most praised nonfiction books of 2016. The movie is not the book, and I plead with you to read it if you loved the film. The book focuses on the same three women, Dorothy Vaughan, Mary Jackson, and Katherine Johnson. However, the film uses a handful of events that happened over decades and blends them into fiction that spans just two years. 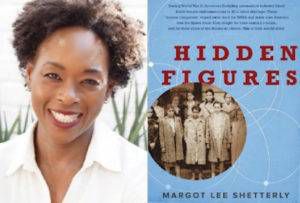 Yes, the movie teaches us three amazing black women worked for NASA at a time when our country made African Americans ride at the back of the bus. It showed brilliant women calculating orbital trajectories having to use separate restrooms because they were black. It showed us an era when computers were people and not machines. And the movie illustrated a period when women began breaking out their limited role as mothers, teachers, nurses and secretaries. But if you read the book, you’ll discover the movie would fail a history exam covering actual dates and details.

Watching Hidden Figures and then reading Hidden Figures reveals the limitation of fiction, in particular, in films based on real people. More and more I’m doubting the validity of seeing stories “based on the truth” or “inspired by true events.” I’m worried that such views of history are closer to Kellyanne Conway’s “alternative facts.” On the other hand, does it really matter that the bathroom story actually happened to Mary Jackson and not Katherine Johnson? Even when Johnson has said she didn’t feel segregated at her Spaceship Controls Branch at Langley. That she used the white facilities, and the time someone did complain she just ignored them. Plus Mary’s story of walking to another building to find a restroom marked colored is entirely different from the movie. Plus the administrator who dramatically knocked down the sign was fictional. Yes, the state of Virginia had dehumanizing Jim Crow laws in place in 1962, but you won’t understand their viciousness unless you read the book. Nor will you understand how and why the federal government integrated in 1958, well before the states.

The real reasons why Dorothy Vaughan, Mary Jackson, and Katherine Johnson should be remembered as important trailblazers are not even in the film. I have a friend who is a professor of urban education who belongs to a group taking young African American girls to see this film. They hope to inspire young people to go into STEM majors. And the movie might do just that, but the book should inspire them more because education is its major theme. Shetterly talks about what a good job was for a black American in the 1930s, 1940s, and 1950s. Working for NACA/NASA was beyond what most African-Americans imagined was even possible. How these women got to those jobs is a vital theme of Hidden Figures, and that’s not shown in the movie.

How former slaves integrated into society after 1865 is history everyone should know, and not well told by Hollywood, or even by schools. Hidden Figures the book gives some of that history, but I would also recommend reading Reconstruction by Eric Foner and The Warmth of Other Suns by Isabel Wilkerson to expand the view back to end of the civil war.

Few people read nonfiction books, so seeing Hidden Figures is the minimum. But a warning, it’s not real history. If you can, read Shetterly’s wonderful book. Taking in both views will illuminate the limitation of understanding history. Hidden Figures should inspire some young people to become mathematicians, engineers, and scientists, but it could also inspire others to become historians.

Of course, even Margot Lee Shetterly’s book doesn’t give us the complete history. Thousands of books could be written about Langley Research Center. Shetterly said she could put names to fifty black women working as computers, mathematicians, engineers and scientists at Langley from 1943-1980, and felt with a bit more research could have found 20 more. Her investigations also showed that from several hundred to a thousand women were employed as computers. I would love to read more history about them.

I was a tiny bit disappointed with Shetterly’s narrative in a couple areas. I wished she had interviewed the white people that worked with Dot, Mary, and Katherine. (Although they could have all died.) I wished she had presented and annotated some of Mary’s and Katherine’s actual work, and shown us how human computers did their jobs. Here is one of Katherine’s papers she co-authored with T. H. Shopinski in 1960.

I was annoyed at the film for its deceptive implied dating of events. The movie begins just before Alan Shepard’s 1961 sub-orbital flight and ends just after John Glenn’s 1962 orbital flight, but the book covers events from the 1930s-1980s. The film shows the three women as close pals, but their personal successes were spread out of over decades, and the book doesn’t present the three like a buddy movie. Dorothy Vaughan was made a supervisor in 1949, and Mary Jackson became an engineer in 1958, well before the film timeline. Mary and Katherine both authored and co-author reports in the 1950s, well before the emotional scene in the film. Both West and East Computer divisions were disbanded in the 1950s. Dorothy did get into computer programming, but not in the silly way the film presented. All three women had major career achievements before and after the film dates.

Reading about the lives of these three women made me realize I made less than 1% of the effort they did in school and career. And their roles as mentors was even more impressive. I beg you to read the book. See the movie for sure, but read the book. And if you really want to understand history, read a nonfiction book after enjoying a work of historical fiction.