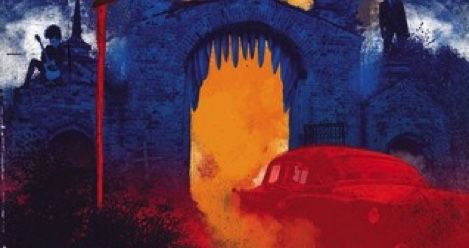 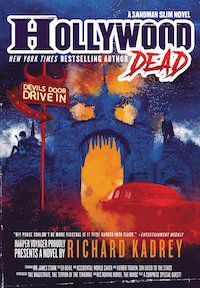 With that opening, Richard Kadrey opens the throttle and pushes down the gas, taking readers along for a wild ride into the tenth book in the Sandman Slim series.

In a way, the opening of Hollywood Dead is a bit too on the nose, as Stark (Sandman Slim himself) has been dead, resurrected, sent to Hell, come back to L.A., gone back to Hell again to rule as the Devil, come back, died a few more times, gotten better, been separated from and reunited with his angelic nature, really died, wandered Limbo, and is now, maybe, finally (?), back for good. Stark’s mortality is a tenuous, fragile thing. Which is ironic since he treats it like a Faberge egg he’s about to use for batting practice.

Of course, Stark has never been as dead as he was in last year’s Mad Max: Fury Road–tinged The Kill Society. There, Stark rediscovered his swagger while touring the outer edge of Hell, reuniting with lovers and allies that he’d lost. Using his well-honed “fuck the system” attitude to get within spitting distance of Heaven’s gate (not that he’d ever want to stay). And, of course, just as he was getting his footing, he was pulled back to the mortal realm, resurrected by Wormwood, an organization that’s the epitome of “absolute power corrupts absolutely.”

“It’s It’s a Wonderful Life in reverse,” Richard Kadrey said when we got a chance to talk about the new book. “Stark’s been gone, but instead of everyone falling apart, they’re moving on. They’re doing better without him.”

Without his support system to normalize his self-destructive superhero antics, Stark has to figure out where he fits in the world, if there even is a place for him. His tenuous grasp on the mortal realm had me white knuckling every page turn. Stark on his own is an unchecked danger to everyone around him, including himself. Pair that with something Kadrey said to me when we spoke last year: “I know how this all ends. It’s all planned out.” And my heart was in my throat for the majority of the novel.

Even with my constant fear for the protagonist’s fate, Hollywood Dead is a quieter book. Sure, there’s still an apocalypse or two to be averted, but things are more introspective. There’s more of, as Kadrey put it “Stark just being Stark.” He continued “He’s getting used to his own skin again, even if he hates it. Especially if he hates it. He has his own PTSD that he’s never addressed, that he has to figure out how to work through.”

Kadrey’s been pumping quarters into this magic fingers mattress of a series for nearly a decade and still keeps readers coming back for more. While it would be a simple thing to keep churning out the same bathroom gin bloodbaths, Sandman Slim is instead a tool for cathartic introspection. As much eye-popping action as is packed into each book, there are as many moments where characters are confronted time and again with their own choices. Whether or not they feel successful as a result of those choices…this is a Sandman Slim book we’re talking about. No one gets to be a part of his story without a serious misstep along the way.

It’s those choices that lead to one of the greatest final acts yet in the series. With Stark as a very mobile, yet quickly rotting corpse, he’s given a choice to involve his loved ones (and a certain highway goddess) and save the world one last time. As has happened so many times before, it doesn’t go anywhere as smoothly as planned.

The only wish I had was similar to Stark’s, that we got to spend more time with the ancillary characters in his life. After being separated from the gang for an entire novel, having them be a shout across the street away was tortuous. Luckily, Kadrey has plans to make up for it. As we spoke, he teased a new project that would give voices to Candy, Allegra, Vidocq, and other supporting members. Is it going to be a collection of short stories? Comics? He wouldn’t say, but I know that he’s wanted to explore their histories for a while. I’m looking forward to finding out what shape that takes.

Speaking of additional projects, we did speak briefly about the new Sandman Slim movie headed by John Wick director Chas Stahelski. “No movement on the script at the moment.” Hopefully that will change soon—I can’t wait to see what Stark’s exploits in the first book look like on the big screen.

If you haven’t had the pleasure and are looking for blood-soaked, heavy metal, Heaven vs. Hell, big screen action, start with the first book and strap in for the ride. If you’re already a fan of Sandman Slim, you’ll need to pick up Hollywood Dead immediately.