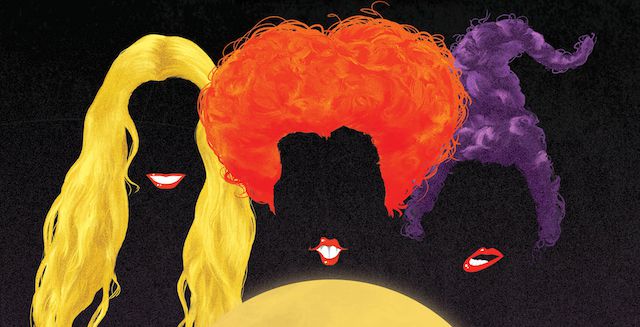 Spoiler alert! This post talks about some new major Hocus Pocus plot points! Read ahead at your own risk, if you have not yet read Hocus Pocus and the All-New Sequel. 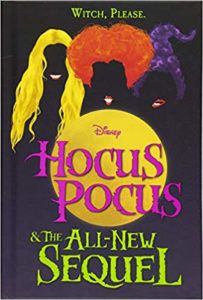 In general, I am wary of reboots, but I do enjoy one every now and then. So while there has been talk of a Hocus Pocus reboot for years, I have not held my breath. However, I was immediately drawn to the YA novel Hocus Pocus and the All-New Sequel, which Disney released with Freeform Books to celebrate the 25th anniversary of the beloved Bette Midler–starring film. The New York Times bestseller directly follows the events and characters of the movie 25 years later (in 2018).

I love the book cover, with the colorful yet shadowy silhouettes of the infamous Sanderson sisters, and the neon, ghostly font title. I definitely enjoyed reading “Part Two Now” of the book, which introduces Max and Allison’s 17- year old daughter (and Dani’s niece) Poppy, her sarcastic sidekick Travis, and her popular friend Isabella. (You can skip “Part One Then,” it’s basically a word-for-word rendition of the movie, which we’ve all memorized at this point.)

I definitely enjoyed the book, with its unexpected twists, scary surprises, and cool new characters. Right off the broom I will say the cliffhanger is legendary!

Now, like many others, I’m anxiously awaiting updates on the Hocus Pocus sequel on Disney +, to no avail. To be clear, I don’t know anything about it. I don’t even know what year it will come out! However, I am willing to predict the reboot will pick up where they left off at the end of the book.

Here are my 3 predictions for the Hocus Pocus reboot:

If you’ve read the book, then you probably have some ideas about the reboot, so please fill me in. Also, I’m not completely sure I understood the last few pivotal pages, so correct me if needed.