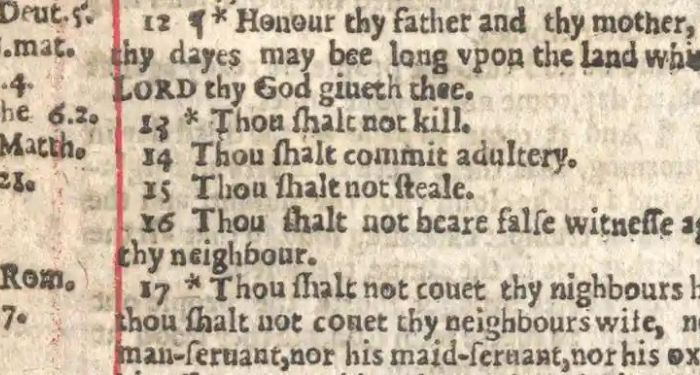 In 1631, less than 200 years after Gutenberg’s first printing of the Bible, the religious text was the most printed book in the world (and sources suggest that remains true today). With both books and literacy still being a novelty for many of Europe’s population at the time, the Bible served not only as a guide to the Christian faith, but also as a learning tool, cultural touchstone, and, for many, a place to record family milestones. Almost any household that had the means and desire for reading material looked to purchase a Bible as the starting point of their collection. Even those Christians who could not read themselves would have frequently heard others read from it at church.

Like many printers, Englishmen Robert Barker and Martin Lucas made the Bible a major part of their business. Barker, whose father had been the royal printer under Queen Elizabeth I, was the official printer for King James I of England. In this role, he was the first to print the King’s new version of the text, now known as the King James Version (KJV) Bible. When Barker published this work in 1611, he cemented his place in Biblical printing history, and the KJV text still continues to be used widely today. While the KJV may be the most numerous legacy of Barker, he became infamous for a different print run of the text.

Together with Lucas, Barker decided in 1631 to print and sell KJV Bibles, sure that the books would find willing customers. And they very well might have, had there not been one key mistake. When printing Exodus 20:14, part of the Ten Commandments, the word “not” was omitted from commandment number seven, meaning that the text now read: “Thou shalt commit adultery” (instead of “Thou shalt not commit adultery”), effectively appearing to endorse extra-martial fooling around. It was this error that gave Barker and Lewis’ 1631 printing the name “the Wicked Bible.”

The misprint was serious (and seriously bad for) business. Barker and Lucas, like all printers of the Bible in England at that time, were only able to run a printing press because of their royally bestowed license. When the mistake was discovered, King Charles I immediately ordered all copies to be rounded up and destroyed. He also fined the men 300 pounds (about a month’s wages) and revoked their printing license, effectively ending their careers. Despite the stringent instructions of the king, it is believed that a number of copies of the “Wicked” Bible survived the purge.

Was the misprint truly non-deliberate? Several historians have suggested that the error was not a simple mistake, but was in fact an act of sabotage.

At the time, Barker and Lucas enjoyed an incredibly prestigious position as the printers for the king. This royal warrant offered them a monopoly on printing the King James Version of the Bible, which was becoming an increasingly profitable enterprise as literacy rates increased in Europe. Some believe that Bonham Norton, a one-time partner of Barker’s who had fallen into debt, deliberately inserted the errors so he could take over the royal contract. As evidence, scholars point to a claim of a second error, this time in Deuteronomy 5:24 where the phrase “God’s greatness” was printed with “greatness” as “great-asse,” a fact that some say suggests deliberate tampering.

Whatever the case may be, the remaining copies of the “Wicked” Bible are of great interest to both religious scholars and collectors of books. Today there are 16 known copies in existence. Seven are in Great Britain, seven are in North America (including copies on display at the New York Public Library and the Museum of the Bible in Washington, D.C.), one in New Zealand, and others are privately held. In 2018, a copy was auctioned by Sotheby’s and sold for $56,250. Other copies have fetched similar sums, with the book turning up everywhere from museums to family bookshelves over the years.

Whether or not a reader’s own faith and religious practice include the Bible, its impact on history is clear, which is why the “Wicked” Bible has become such a phenomenon. Those interested in the history and politics of printing, as well as Biblical scholars, continue to be fascinated with the book and its history today.