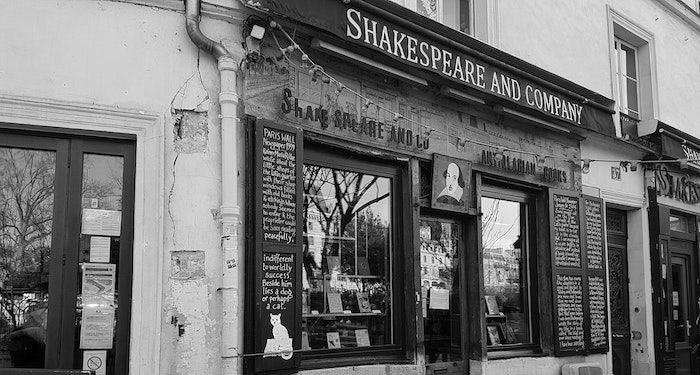 The year was 1919. The first World War was still fresh in everyone’s minds. France and the rest of the world were in the midst of the last global pandemic. That was when Sylvia Beach opened the original Shakespeare and Company in Saint-Germain-des-Prés in Paris.

Sylvia Beach fell in love with Paris as a teen. In the 1910s, Beach, her sisters, and her mother “joined the Congressional Union for Woman Suffrage,” writes Caitlin O’Keefe of The New York Review of Books, “later known as the National Woman’s Party.” Beach moved to Spain to pursue literature in 1916, hoping to further the cause of feminism and women’s suffrage through her writing, but couldn’t handle the repeated blows of rejection.

She then moved to Paris and joined the Red Cross to help with the war effort. She originally hoped to join the Finley Unit as a translator. When this didn’t pan out, she joined the Balkan Commission of the Red Cross. There she did her work with the Red Cross and with Serbian feminists, but found the work frustrating in the face of overwhelming patriarchy.

Back in Paris, Beach continued the fight for feminism, befriending and defending noted anti-war feminist Hélène Brion. Brion was arrested for her anti-war views, but this was just the beginning of Beach’s experiences with women’s views being pushed down and oppressed. She witnessed the voices of women authors (Virginia Woolf) and booksellers (Adrienne Monnier, with whom Beach would later have a romantic relationship) suppressed, and so took the next step: opening her own bookstore on November 19, 1919, at 8 rue Dupuytren.

Shakespeare and Company was more than an English bookstore in Paris. It was more than a place to find feminist writings in a patriarchal world. It became a flame attracting the many moth-like expat writers living in Paris. An unknown young man named Ernest Hemingway found his way to Shakespeare and Company in the early 1920s. Ezra Pound, Gertrude Stein, Mina Loy, F. Scott Fitzgerald, and many other expatriate writers found a haven in Paris with Beach and her store.

In 1921, Beach moved Shakespeare and Company to 12 rue de l’Odéon, just across the street from Monnier. Shortly thereafter, Beach met James Joyce at a party. According to The Golden Moments of Paris: A Guide to the Paris of the 1920s: “‘Is this the great James Joyce?’ she asked nervously. Wanly, Joyce confirmed ‘James Joyce,’ and ‘put his limp, boneless hand in my tough little paw.'”

At the time, Joyce was already a well-known writer, but had been unable to publish his manuscript for Ulysses. The American magazine The Little Review had been prosecuted for trying to serialize the bawdy manuscript, perceived as too controversial for 1920s readers.

Sylvia Beach, who had only been running her Parisian bookstore for three years, offered to publish Ulysses. James Joyce accepted, albeit with terms that ensured Beach would lose money on each copy printed and Joyce could keep living his cosmopolitan lifestyle. In 1934, when Ulysses was finally cleared for publication in the United States, Joyce sold the rights to Random House, giving Beach nothing for her efforts. Nevertheless, Shakespeare and Company was firmly entrenched in publishing history.

The End and a New Beginning

Despite Sylvia Beach’s tenacity, World War II proved to be too much for her little bookstore, though not for her spirit. As Germany occupied Paris, a German officer wanted to buy a copy of Finnegans Wake. Beach refused, and the officer threatened to confiscate her stock, close her shop, and intern her. Beach and her friends quickly closed the shop and moved all of her stock to an empty apartment upstairs in 1941.

In 1951, George Whitman—another American—opened his own bookstore at 37 rue de la Bûcherie in Paris. Among the stock of books in Le Mistral upon opening were the purchased stock from Beach’s store, closed a decade before. Whitman opened Le Mistral hoping to emulate Sylvia Beach’s original store, and she bequeathed the iconic name to him before she died in 1962.

On the 400th birthday of William Shakespeare in 1964, Whitman renamed the shop Shakespeare and Company, officially putting the world’s most famous bookstore back on the Parisian map. Like Beach’s before him, Whitman’s store became a haven for expats. According to Shakespeare and Company’s own website, “Allen Ginsberg, William Burroughs, Anaïs Nin, Richard Wright, William Styron, Julio Cortázar, Henry Miller, William Saroyan, Lawrence Durrell, James Jones, and James Baldwin were among early visitors to the shop.”

Today, Shakespeare and Company still sits at 37 rue de la Bûcherie in Paris, directly across from Notre Dame Cathedral. It is on every list of must-see places for tourists visiting the City of Lights. George Whitman died in 2011 at the grand age of 98. His only child, Sylvia Beach Whitman, had been working at the bookstore since 2002 and running the store since 2006. She is the owner and operator of Shakespeare and Company to this day.

In 2016, Shakespeare and Company published another book: Shakespeare and Company, Paris: A History of the Rag & Bone Shop of the Heart, edited by Krista Halverson. The book features a foreword by famed novelist Jeanette Winterson and an epilogue by Sylvia Whitman herself. The store is a frequent stop on European book tours (and likely will be again, when such events are safe). Recent author events have included Chigozie Obioma, Deborah Levy, and, of course, Jeanette Winterson. Tourists not only stop in to buy books at the historic store, but to fill Instagram with selfies in front of the green storefront.