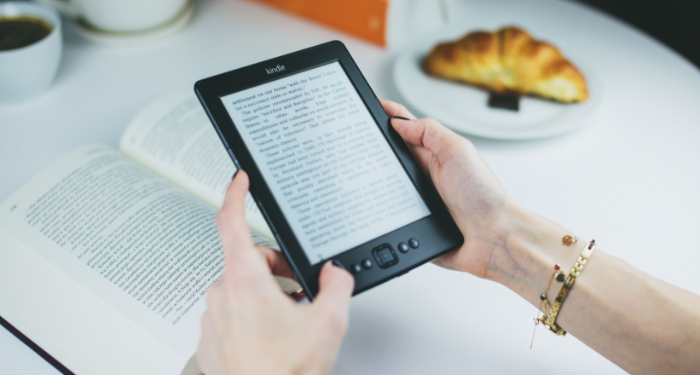 The Amazon Kindle turns 15 this month. In the years since its launch, this nifty device has changed the publishing industry forever.

Though e-ink, a technology that powers many Kindles, is not really a new invention, Amazon saw success employing it, making ebooks much more popular than previously. The Kindle opened up opportunities for publishers and authors alike. It also became another reading option for consumers, especially students, as many libraries now loan out ebooks to their patrons. Most importantly, the Kindle changed reading habits of many people.

On the business side, the Kindle dominated every corner of the ebook industry, prompting rivals such as Kobo and Barnes & Noble to ride the train of manufacturing their own ereaders. Even then, the Kindle became a golden goose for Amazon as the device developed its own following. Today, Kindle might as well be synonymous with ebook, with its massive reach that accounts for 68% of overall ebook market.

Over the past 15 years, the Kindle never failed to show that market dominance. Amazon rolled out various iterations and variations, which kept improving every now and then. But at the same time, the Kindle had its fair share of failures and controversies.

Let’s dive into a brief history as well as the controversies, failures, and successes of the Kindle — what is considered to be Amazon’s most successful device invention so far. How has it been so successful after all these years despite the shaky state of the industry?

A Brief History of the Kindle

Three years in the making, the first-generation Kindle was launched on November 19, 2007 in New York City, which was presented by Jeff Bezos himself. It came with 90,000 titles already available, selling out in less than 6 hours. At the time, the price was a whopping $399. And back then, the device looked unappealing, with its large keyboard and a small screen. It also seemed bulky, at 10.3 ounces.

Along with the launch of the device was the introduction of Kindle Direct Publishing, the self-publishing platform for authors.

But tech companies being tech companies, Amazon created a walled garden: its own self-sustaining ecosystem for this device. In fact, epub, the industry-standard ebook format, was inaccessible on a Kindle until recently, which still has a catch. But during the beginnings of the Kindle, Amazon adopted the mobi format, which it acquired from Mobipocket. Recently, however, this file format has been phased out in favor of newer ones: KF8 and KFX.

The Kindle’s apparent success came along with controversies as well. In its early days, Amazon locked horns with the gatekeepers of publishing.

The basic Kindle underwent many iterations, or so called “generations,” throughout the years. Likewise, Amazon also introduced other variations of the device, and each has their own succeeding iterations.

The Kindle 2 was an improvement to the first-generation Kindle. It still had no lights and had a keyboard and some buttons, but it had an updated design and longer battery life. Next came the Kindle DX, which looked odd. The device appeared huge and had a rounded keyboard at the bottom. Kindle 3 or the Kindle Keyboard, however, was not much different from the older versions aforementioned. It had rounded corners and still had a keyboard, but it was significantly faster.

In Kindle 4 and Kindle Touch, Amazon finally got rid of the physical keyboard. But these versions still had some keys and a cursor pad, which looked rather strange. Then came the Kindle 5, which was frankly not much different from its predecessor, but it was faster.

The basic Kindle had many iterations after that, which continued until Kindle 11 in 2021. This version is so much better, with 16 GB storage and 300 ppi display, and it looks far unrecognizable from its first inception.

Along the way, Amazon also introduced other variations of its prize possession. One of them is Kindle Paperwhite, which was first released in 2012. The device rivals the basic Kindle and already had many iterations since it first came out. The latest is the Kindle Paperwhite 5, which was just unveiled in December 2021.

On the other hand, Kindle Voyage came out in 2014, which had a feature called PagePress that allows turning pages simply by pressing buttons. Four years later, however, it was discontinued.

In 2016, another Kindle variant was put on the market: Kindle Oasis. The device is marketed as a luxury item, and the last major iteration was released way back in 2019. However, little to no updates have been given to the device.

After all these countless product launches, Kindle is now reduced to three levels: basic Kindle, Kindle Paperwhite, and Kindle Oasis. If you’re planning to buy your first one and unsure of which to choose, here’s a useful guide.

As Amazon’s flagship brand, the Kindle is no stranger to controversies.

The first of such was in 2009 when Amazon remotely removed ebook copies of George Orwell’s 1984 and Animal Farm from users’ Kindle devices. According to Amazon, the uploader of said books didn’t have the rights to publish them, and so it had them scrubbed from the Kindle store and from users’ devices. This, however, prompted a heavy backlash, as it broke the terms Amazon previously laid out.

Another such case is when a Norwegian woman had her Amazon account and all her past ebook purchases from the Kindle store wiped out. Strangely, no explanation was given to her by Amazon.

Perhaps, the biggest controversy was when Amazon went to a legal battle with the five of the then Big 6 publishers. Amazon previously controlled the prices of ebooks, setting them to a convenient $9.99. The publishers, however, wanted to wrestle control back, as their books bore the brunt of ebook’s low prices, so these publishers colluded with Apple to set their own prices. This was illegal, according to the Department of Justice. Hence, they were sued.

To this day, the pricing scheme set by Apple and the publishers remains.

But while Amazon became a wild success in the U.S. and in different parts of the world, it failed to capture the Chinese market. The local ebook market evolved, while the Kindle lagged. In China, readers had various options, and the Kindle eventually lost out on all the competition.

Still, despite its controversies and failures, Amazon’s Kindle ereader series is considered a success, having survived and thrived in an untested industry.

Amazon hit the jackpot with the Kindle. From hardware to software department, it secured its position as the leader in the ebook business. The company successfully dominated the ebook industry, even providing the infrastructure at the outset.

Though there have been a lot of other ereader brands that popped up in the past, some flopped really hard, such as Nook and Sony. And while some brands are catching up, like Kobo, they have achieved nowhere near what Kindle has. Without Kindle, ebooks may never have taken off at all.

Fifteen years onward, the Amazon Kindle remains a top contender in the ebook industry, despite the surplus of advanced ereaders in the market and the fact that few changes to its technology have been made in recent years. As the technology improves, it’s expected to catch up. Perhaps in the next five years, Amazon would finally offer colored versions of its ereaders.

One thing’s for sure, though: The Kindle is definitely here to stay.