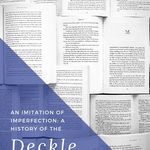 While doing research for my post about the shape of books, I stumbled on some information about deckle edges, and I thought it was worth its own post, if just to share some papermaking eye candy with you. First, a definition: deckle edges are the ragged edges on paper.

These edges are a natural result of making paper by hand, but most of the books on your shelf with irregular edges are an artificial simulation of true deckle edges. Why do modern printers imitate a defect of earlier printing processes? To see how we got there, we’ll go on a brief journey through the history of papermaking.

Papermaking began in China during the Eastern Han Period (25–220 CE), where it began to spread through Asia. In Japan, a deckle was added, which is a frame that fits inside of the papermaking mould. By the 11th century, this process traveled to Europe: in fact, the original papermaking moulds in Europe were likely still made of bamboo! (Papermaking: The History and Technique of an Ancient Craft by Dard Hunter)

View this post on Instagram
Book Deals Newsletter
Sign up for our Book Deals newsletter and get up to 80% off books you actually want to read.
Thank you for signing up! Keep an eye on your inbox.
By signing up you agree to our terms of use

My last day at #icomkyoto2019 and spent the day attending #CAMOC (International Committee for the Collections and Activities of Museums of Cities) sessions at #themuseumofkyoto There was a live demonstration on making traditional #japanesepaper The quality of the finished paper was amazing! So smooth and delicate! 😍 #kyoto #japanesepapermaking

The deckle doesn’t seal perfectly into the mould, which means that as the slurry of pulp and water sits in the mould, some gets trapped under the edges of the deckle. This is what creates the “deckle edge.” In Japan and China, these edges were trimmed off. When it was brought over to Europe, deckle edges were also unlikely to survive the binding process. If they weren’t cut off by the paper maker, they were usually trimmed by the binder. Some binders were so zealous about this that book were left with almost no margins at all.

By the 17th century, book collecting had gained popularity in Europe. Where the deckle edge had previously been seen as a defect, collectors began to seek them out at this point. Trimmed edges were a red flag that a book may have been rebound, and could have been trimmed too far. A deckle edge was a sign of a pristine, original binding—or at least a sympathetic one (The Book by Keith Houston).

In Dard Hunter’s Papermaking: The History and Technique of an Ancient Craft, he says (somewhat judgmentally) “During the early years of printing in Europe the deckle edges on paper were looked upon with disdain. Now these some rough edges are the label of respectability and recall to mind private presses, limited editions, and all manner of book snobbery.” He is appalled by the rise of artificial deckle edges on machine made paper, calling it “an imitation of an imperfection.” Once an unsightly defect, then a mark of the handmade, now deckle edges are usually artificially created with sandblasting, sawing, or tearing (Houston).

What’s special features do you like on books? • I like so many- deckled edges, sprayed/stenciled edges, foil on the cover, gorgeous end pages. All of it! • Probably going to be my only post today because I’ve been fighting a migraine all weekend. It’s messed with all my plans so I’m kind of in a funk right now, but hoping I’ll get to squeeze in a little reading time today. The weather is amazing here in Kentucky right now, so I’m pretty bummed about being stuck inside instead of being out there enjoying it. I hope you all are having the most pleasant of weekends! • • • #shelfiesunday #decklededges #bookfeatures #bookstack #booksbooksbooks #steelepages

True deckle edges still exist. They’re the hallmark of handmade paper: in fact, according to Hunter, only a handful of bibliophiles would able to distinguish handmade paper from machine paper if it weren’t for the deckle edge. Handmade paper is an art form, and I highly recommend trawling through instagram looking at some of the incredible work being done.

There are still people continuing the papermaking process in much the same way that is was done thousands of years ago.

We are opening our doors tonight ! 18.00-22.00 After many hours of papermaking and edition printing with our wonderful collaboration partners and fellow artists of the @frompapertoprint crew, we are welcoming you to come by this weekend to see our special edition & the working routines and techniques of each individual handcraft and the 4 partnering studios at Glockenbachviertel, Munich. All studios are reachable within a 3min walk from each other. We‘ll be showing at Auenstr. 28, Westermühlstr. 26, Holzstr. 26/ 27/ 41 For more details, check our website: www.frompapertoprint.de #frompapertoprint #printmaking #papermaking #paper #print #art #artist #collaboration #munich #muenchen #munichart #fineart #edition #limited #exhibition #show #glockenbachviertel #team ! @papierwerk_glockenbach @dreipunktedition @m_darling_drawing_n_painting @yokoomomi @galerieraum3 @annamarialeiste @kristianesemar @arundellalexander @miriam_salamander

A post shared by DRUCKGRAFISCHES ATELIER (@druckgrafisches_atelier) on Sep 13, 2019 at 12:34am PDT

Deckle edges were created from an imperfect, handmade process. Nowadays, machine-made paper can be precise and efficient: no ragged or feathered edges needed. I think it says something about the ridiculousness and loveliness of humans that we have nostalgia for these cosmetic defects, enough that we have machines produce replicas of them. Deckle edges continue to be controversial, but diving into the history of papermaking has made me better appreciate this peculiarity of books.

We had a great time making #mycopaper with @thecuriouseed & @swalenyc at the @swale_house on governors island – join us for another round next Saturday, September 21 from 1-3pm! We are using medicinal mushrooms to make handmade paper at a sliding scale – so come through (link in bio to signup) . . . . . . . . #papermaking #handmadepaper #paperthatheals #turkeytails #mushlove #mycology #mushrooms #mushroommagic #crafty #craftivism #craftclass #governorsisland #environmentalart #biodesign #biomaterials #makersmovement #textiles

A post shared by FIBERHOUSE COLLECTIVE (@fiberhousecollective) on Sep 15, 2019 at 5:58am PDT

Papermaking: The History and Technique of an Ancient Craft by Dard Hunter (If you want to learn more about papermaking, including the history, this is a must read!)