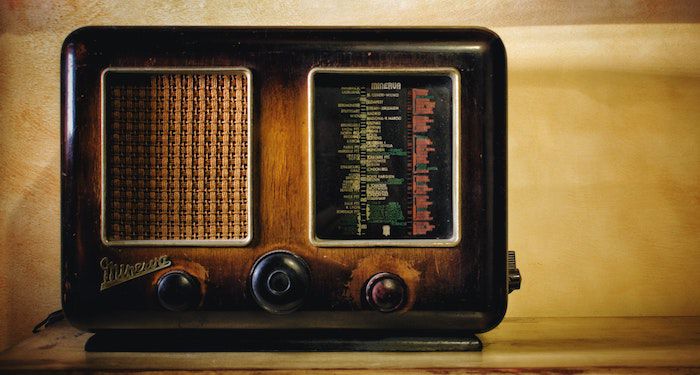 After all these years, I can still remember the reaction from my dad when we saw a preview for the 1994 movie The Shadow. We were sitting around watching TV as a family. The preview was very ’90s, complete with the ever-present Mr. Moviefone narrator.  At the very end of the preview, over the typical montage of action scenes, he asked, “Who knows what evil lurks in the hearts of men?” Without skipping a beat my dad excitedly responded, “The Shadow knows!”

This movie had triggered a good memory of something from his childhood. Now, don’t feel bad if you can’t remember the trailer or the movie. I saw it, and I don’t even remember what happened. It was a visual retelling of the radio serial of the same name from the Golden Age of Radio. Most people may think of the decades between the 1920s and ’30s when they hear this term. However, radio dramas were popular into the 1950s. Radio was used to relay information as well as entertainment. This included quiz shows, play productions, and other types of shows that have since moved to television.

Before you dismiss the idea that this type of medium is subpar by today’s standards, remember the 1938 production of War of the Worlds, narrated by Orson Welles. This was so convincingly delivered by Welles that some of the public allegedly believed that an alien invasion was actually happening. While this has since been disputed, the fact that the these urban legend is still referenced almost a century later is a testament to the power of audio storytelling.

A Brief History of Radio

In its heyday, radio was one of the more affordable avenues for entertainment at the time. A one-time purchase of a radio opened up access to news shows, comedy hours, children’s programming, and the like. Tickets to the movies, theater, or the opera could be less affordable and were only for a one-time experience. A radio opened up the option for many hours of entertainment.

It also gave families a chance to gather to listen to shows together. While the world may be a bit busier and crazier today, there is still a desire to gather round as a household and enjoy time together. These stories gave families of yesteryear this opportunity. They would gather together to hear the latest installment.

As with TV shows nowadays, radio serials had advertising sponsors, which gave them a budget to work with. This is how the term “soap opera” was coined, since those shows were originally sponsored by laundry and dish detergent companies. There were different ways this advertising could be done. One option was bookend announcements at the opening and closing of the shows. Another was commercial breaks partway through.

There were also promotional events for the sponsors. Young listeners would get these decoder rings and other trinkets, like badges, by mailing in box tops or proof of purchase from specific cereal brands. It was a win/win for everyone. Listeners would keep buying the product — or in the case of children, begging their parents to — and the shows would keep getting made.

I’m sure we all remember the infamous “Be sure to drink your Ovaltine” scene from A Christmas Story. After weeks of waiting, Ralphie received his decoder ring in the mail. He rushed to decipher the super secret message, which ended up being an ad. There was much disappointment on both sides of the screen.

Radio stayed popular until the 1950s, when televisions were introduced. With that, the reign of radio came to an end. Most households moved to that as the way to get their news and entertainment. Radio was still around, but it was mainly used for music and news. All other types of entertainment had moved over to television, and that is where they seemed they would remain forever.

In recent years, there has been a resurgence of audio storytelling through a specific type of podcast. The main focus is to be reminiscent of this Golden Age of Radio, but you no longer needed to gather around a radio to listen. Episodes are available on your computer or phone at any time you choose. If you’re patient, you can even wait and marathon multiple episodes at once. This sudden burst may lead some to wonder: Why now?

First, there is the fact that it is all audio, so it isn’t as expensive as a movie. It is the voice actors in a recording study, so no need for set pieces or locations. Everyday objects allow for sound effects to be done practically. Creators have more options here than with a movie, since they can gather loved ones to help tell their story.

Podcasts originally covered specific topics based on the interests of their respective hosts. It wasn’t long before this expanded to include audio drama. From there, a world of opportunity opened up for all sorts of innovative storytelling. You have mysteries, like Limetown. There are space operas, like Wolf 359. There’s the ever popular Welcome to Nightvale, about the oddest town you’d never want to visit. The possibilities were and continue to be endless.

Since it is all auditory, your imagination has to play a large factor into how deeply the story affects you. There aren’t visual cues; you have to come up with what you should be seeing all your own. It’s a completely immersive experience. As a personal example, I listened to Wolf 359 primarily at work. There were many moments during that listen where I would stop working completely with my breath held, waiting to see what was going to come next. It was that immersive and that good.

Audiobooks have always been an option as well. However, they weren’t always the best. Most times you only had one narrator; very rarely were there a duo. There wasn’t any background music or ambient sound, so it was always just one person reading to you for a set amount of hours. And they didn’t always put a lot of emotion behind it. So it could be, for lack of a better word, boring. Speaking on a personal note, there’s no way I would have been able to make it through Dune if I hadn’t listened to the full cast production of it.

Nowadays, a good number of audiobooks are full cast, such as Alyssa Cole’s The A.I. Who Loved Me. This opens up a whole new world. When you have an entire cast telling you a story, it becomes an entirely new experience. It feels like you’re in a theater watching a production or even parked in front of your television. This opens up the option for a more immersive listening experience, especially with newer audiobooks that add sounds effects and music.

The Future of Audio Storytelling

Storytelling has always been part of our society and is still ingrained today. Even in the times of ancient civilizations, bards would tell tales to crowds of people. That is how The Iliad and The Odyssey became part of our literary world. Parents read to their children. People listen to audiobooks. There is something that will always be enthralling about being read to.

I don’t ever feel that the printed novel will ever really go away. Books are tangible and humans like tangible things. That said, with the way this corner of the bookish world is developing, audio storytelling is going to continue growing. Very soon, full casts could be the norm for audiobooks, with single narrators only assigned for memoirs. We could see a return to radio, or in this version, internet serials. And I’m here for it. As long as there is an audience, there will be a need for audio storytelling.