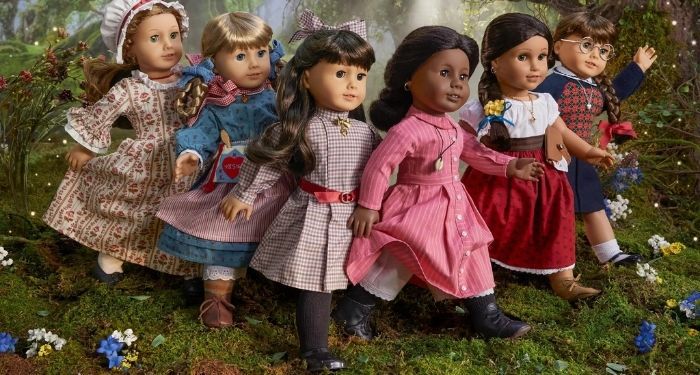 I still have my Samantha doll. I was in an American Girl club when I was in second grade (you didn’t have to have a doll to join, but I did get one for Christmas that year). I grew up in the kind of place where most of my friends had at least one, if not a couple of American Girl dolls. One of my friends had the horse, which part of me covets to this day. American Girl (AG) was a part of my life that I look back on fondly, but have never truly reexplored. In recent years, there have been podcasts and other media focusing on the impact the brand had on the lives of people growing up with Felicity, Samantha, Kirsten, Molly, and Addy (and, later on Josephina, Kaya… and after that I lost count, so the scope of this article will be the girls of the ’90s and very early 2000s).

The announcement that Brit Bennett had written the book for Claudie, a new American Girl doll who was growing up in 1920s Harlem made me realize that I had no idea who had written the American Girl books I’d grown up with. I hadn’t thought of them as having authors at all — they just kind of were. My second and more probable guess would have been that the books were written in a sort of Carolyn Keene situation.

A Brief History of American Girl Publishing in the 1990s.

The first American Girl books were published in 1986 and focused on the three dolls available at the time — Samantha, Kirsten, and Molly. The year 2016 was the first time American Girl was licensed with an outside publisher, Scholastic. The cookbooks are now published by Simon and Schuster while some of the fictional books are published by Random House Children’s Books. It’s tricky to find some of the original historical novels, but I saw a bunch on Etsy and AbeBooks. A few are available for Kindle as well.

The 1990s wasn’t just about the dolls, of course. There was the magazine and the monthly catalogs that seemed to find any house with a tween girl in it. Who didn’t while away an hour while circling all of those miniatures that were out of reach for most families? My friends and I also loved the advice books, which were a staple of sleepovers and when we ran out of embarrassing moments that were AG-approved, we took to the internet with much less wholesome results. AG had the market cornered on things like craft books, cookbooks, and guides on how to be a good friend and responsible community member. They now publish a line called A Smart Girl’s Guide, which includes A Smart Girl’s Guide: Digital World and A Smart Girl’s Guide: Race and Inclusion.

One of the best-known nonfiction titles published by AG of my era was The Care and Keeping of You, which was written by Valorie Lee Schaefer. It’s still being published and has sold over five million copies to date. A revised “older girl” book was published in 2013 but you can still get the original “younger girl” edition (though without the spread about tampons). This incredible article gives a great overview and history of this particular title. Spoiler alert: there have always been people who have wanted to keep us in the dark about our own bodies.

The Women Who Brought Us the Girls

My memories of the texts themselves are slightly hazy and are only of things like Samantha and the accidentally salted birthday ice cream, Molly sitting in front of a plate of turnips forever, and Felicity describing what a tannery smelled like.

And while the titles of the early American Girl books all followed the same pattern of introductions, birthday celebrations, Christmases, “saving the day,” and “changes” (you can still get some of these classics of the ‘90s as Kindle Books), A quick search of the American Girl site tells me that all of their historical books still don’t feature their authors on the covers. With the exception of Meet Claudie by Brit Bennett. Despite the fact that they just always seemed to exist for me, the American Girl books of the 1990s had authors.

Valerie Tripp wrote many of the early American Girl books including books for Samantha, Molly, Felicity, and Josefina. The most recent book is Izzy Newton and the S.M.A.R.T. Squad (with illustrator Geneva Bowers) for National Geographic. She has also written about greek mythology and worked on middle grade adaptations of classics including Sherlock Holmes and Tom Sawyer.

The Kirsten books were written by Janet Beeler Shaw, who has also published two books of poetry‚ a collection of short fiction‚ and an adult novel‚ Taking Leave. She is also the author of the Ambersand Castle trilogy.

Shaw is also the author of the Kaya books. American Girl worked with Indigenous people to create the facial mold for the Kaya doll (other American Girls up to that point had smiles that showed their teeth, which would have been considered disrespectful). The brand worked with the Nez Percé (Nimíipuu) but did not hire an author with a related background, which is something they have done more often in recent years for both their historical and modern characters. Kaya’s books differ from the early American Girl books because her life milestones would not include things like Christmas.

Contributors to Samantha’s story were Susan S. Adler, Maxine Rose Schur, and Valerie Tripp. Schur has written other books for children including her most recent Finley Finds His Fortune and Child of the Sea. She is also a travel writer who has written a collection entitled Places in Time.

Addy’s books were written by Connie Rose Porter, who is also the author of Imani All Mine and All-Bright Court. Porter was honored as an Uncrowned Queens Culture Builder by the Uncrowned Queens Institute for Research & Education on Women. Porter and Brit Bennett also recently met at the American Girl Store in New York City for Bennett’s book release and the photos are great.

While I never did figure out the American Girl computer game and I will always feel like “my” American Girls were the pinnacle of the brand, I am so glad that the girls of today still have the girls of before to look up to and that those girls now come from a greater range of time periods and diverse backgrounds than I had access to (though ask me again how I feel when the day comes and I am faced with a 2020 historical doll. Courtney’s 1986 is just about as far as I want to go).