I love both historical fiction and fantasy, so books that combine both are like honey. While it seems like these genres should be quite different—since one is based in fact and the other completely fictional—I actually find them to be quite similar in feel. Both require a massive amount of world building, both have immersive settings that become as much a character as the protagonists, and both require a lot of research. Fantasy novels often take their inspiration from history anyway, so why not make the historical influences even more overt? I’ve compiled a list of ten of my favorite historical fantasy novels by women authors.

I would love to hear your recommendations, especially if you have any about non-Western cultures. 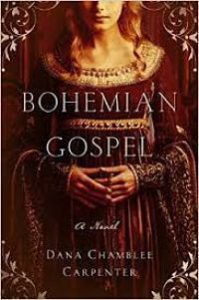 In 13th century Bohemia, Mouse—a ward at a convent—can see people’s souls and has unusual healing powers. Her mentor Father Lucas insists she’s a child of God, but she’s not so sure. When she looks at herself, she can see no soul, and the townspeople whisper she’s a witch. This is such a compulsive read; no dry and dense history here. I read this at the beach, and passed it to my mom and sister when I was done. We all loved it! Unfortunately, my copy is now warped by ocean water. Disclaimer: Dana and I teach at the same university, but I would love this novel even if I didn’t know her!

This is probably the book everyone thinks of first when you hear historical fantasy. Surely you’ve read it, right? No? Well, okay then. It’s set in an alternative Regency England where magic has been lost and theoretical magicians discuss magic versus practicing it. That is, until Jonathan Strange randomly decides to become a magician and visits Mr. Norrell, who has the largest collection of magical books. Then real magic ensues. This is a dense, well-researched read, complete with footnotes to mimic the historical nonfiction genre.

Speaking of Regency-era England and magic that’s been lost, meet the non-dense, feminist version of Jonathan Strange and Mr. Norrell. Do you want women and people of color to be main characters in your historical fiction, with depth and passions and multiple dimensions? Then read this.

Um, speaking of Regency-era England, again (this is getting embarrassing), His Majesty’s Dragon features intelligent dragons in the Napoleonic war. If that’s not enough to convince you to pick up the novel, I don’t know why you clicked on a post about historical fantasy in the first place. Dragons + History = Must Read.

Let’s venture away from England, shall we? Set in medieval Russia, The Bear and the Nightingale brings Russian fairy tales to life. Vasya, the protagonist, is fun, feisty, and definitely not a rule follower. This series combines political intrigue with folkloric magic.

Magic, history, heartache. This novel is simply beautiful. Chava, a golem, and Ahmad, a jinni, collide in mid-century New York City. They discover what it means to be human through rich, humane daily encounters. Because secondary characters are fully developed and explored, I found this to be a slow read, but also one I never wanted to end.

Another novel featuring djinn (there have been quite a few of those lately, another post idea!), The City of Brass takes place in 18th century Cairo. It’s fast-paced, full of political intrigue, and completely unique.

The Fox Woman by Kij Johnson

The Fox Woman weaves three diaries into a story about a kitsune (a shapeshifting fox) who falls in love with a human. It takes place in 11th century Japan, where social norms for women are stifling. But this is a novel about agency, about how the choices we make can affect us and everyone around us, even if we follow social norms.

A fun romp through classic horror fiction, where monstrous daughters team up to solve mysteries with the occasional help from Sherlock Holmes. The central cast includes Mary Jekyll, Diana Hyde, Justine Frankenstein, Catherine Moreau, and Beatrice Rappaccini (though I should not forget Mrs. Poole, the housekeeper, and Alice, a maid). I loved these women so much, and can’t wait to read about more of their adventures.

Servant of the Underworld by Aliette de Bodard

This is the only Aztec-fantasy novel I know of; are there more? Because it’s awesome. The religious-based magic system feels very real, and it’s an immersive read from start to finish.