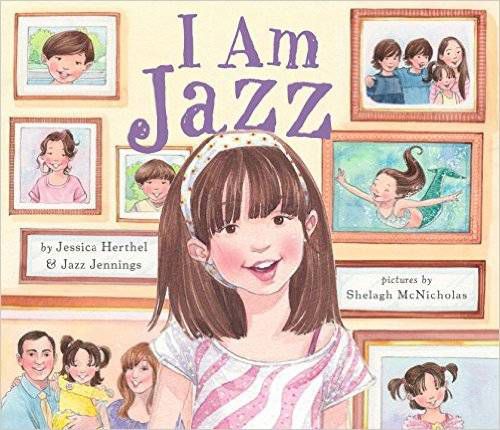 A Wisconsin school was forced to cancel a planned reading of a book about a transgender child after threats of a lawsuit… what a sadly unsurprising lead to an article. First, some background as reported in the Cap Times:

Students at Mount Horeb Primary Center were scheduled to read and discuss I Am Jazz, a children’s book about a transgender girl. A letter was sent out to parents notifying them of the scheduled reading on Nov. 19th. The note, signed by the principal, school psychologist and a counselor, said that the school was working with a student that identifies as a girl but has male anatomy.

The reading was cancelled after some district parents contacted the Liberty Counsel, a “non-profit litigation, education and policy organization with an emphasis on religious liberty issues” with concerns about the program. The Liberty Counsel sent a (truly offensive and ill-informed) letter to the district threatening a lawsuit, and the district decided to reevaluate the reading. The decision will go to the district’s Board of Education for consideration, as the district currently doesn’t have a policy on this issue.

The Wisconsin State Journal later reported that one of the reasons the district planned the reading was because the six-year-old student was displaying signs of anxiety and depression:

The mother of the Mount Horeb student, whom the State Journal is not naming to protect her family’s privacy, said that teaching inclusion to her daughter’s classmates is essential to her successful gender transition.

“My daughter just wants to be accepted, included, and not bullied,” she said. “If we can teach them to respect people’s differences at a young age, it’s important.” …

Luckily, she said, bullying hasn’t been much of an issue in the past or since her daughter’s public identity has changed.

“Every once in awhile a kid would ask why she likes girl stuff. Even since the transition, the kids in the class were like, ‘That’s OK, you’re (name) now.’ The kids have totally accepted this – it’s just the adults,” she said.

Sadly, there’s almost nothing about this situation that surprises me – I just watched an issue with the same themes go down in my local school district.

When I’m not rioting about books, I work as the editor of a small newspaper in Minnesota. This year, our school board grappled with a request from the high school Gay Straight Alliance to become an official school organization. The community is very, very socially conservative, so despite the fact that there is clear legal precedent for the GSA to be allowed to meet, administrators and the school board struggled with the decision. Parents who attended school board meetings implied legal action and promised to remove kids from the district depending on the outcome. Either result would have clear financial implications for a small school district.

We all like to think that school district administrators and school board members are making decisions based on what is best for kids. But in reality, school boards answer to a host of other stakeholders including parents, teachers, taxpayers and community members. With ever-tightening budgets, fear of a lawsuit – even one from an organization that the Southern Poverty Law Center classifies as a hate group – is a real deterrent to making the right, if difficult, choice.

One of the more perplexing arguments I heard during our local GSA debate was that a public school is not a place to highlight differences. Proponents of this view argued that students should be taught tolerance and respect for others, but making a show of differences caused controversy – the very thing a public school should supposedly avoid. That fear of difference, coming almost exclusively from adults and not students, is very much part of the letter sent to the Mount Horeb district.

It all seems to go around and around. It has seemed to me that the arguments against the GSA or reading I Am Jazz, disguised as “religious liberty” or “parental rights” or “avoiding controversy,” are rooted (knowingly or not) in a fear of people and opinions and cultures that are different. Teaching kids to hide their differences suggests some differences are wrong or shameful — something kids clearly pick up on whether stated or not. Not letting kids learn about those differences in a safe, inclusive space ultimately contributes to the very fear of differences that causes these threats in the first place.

Eventually, our school board did approve the GSA as an official, school-sponsored organization. But the decision was made with an emphasis on the district’s legal obligation to recognize the group, not because they felt the students who are part of the club are doing good work or need a supportive place at school. It was one of those victories that felt a bit hollow, knowing there’s still so much work to do.

Teachers and administrators at Mount Horeb Primary Center tried to do their part by making an effort to help a student feel more included and understood by her classmates. There’s clearly community support for this effort — nearly 600 people attended a reading of I Am Jazz at the Mount Horeb Public Library this week that was held in response to the cancellation. I hope the Board of Education sees this and eventually supports reading the book by remembering their ultimate responsibility is to the children in their care… not the fearful adults making the most noise.