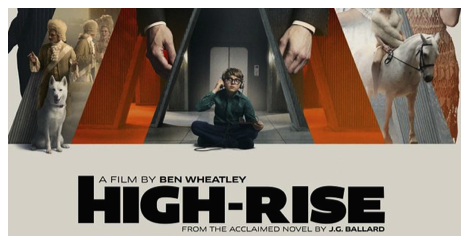 J.G. Ballard’s High Rise has one of my favourite opening lines in literature:

‘Later, as he sat on his balcony eating the dog, Dr Robert Laing reflected on the unusual events that had taken place within this huge apartment building during the previous three months’

It is a brave filmmaker who takes on the task of bringing this image to screen, let alone rising tide of madness contained in Ballard’s psychosocial science fiction novel . So it was with trepidation that I sat down to watch Ben Wheatley’s adaptation. His previous films – ranging from the dark psychological horror Kill List to surrealist historical drama A Field in England, taking a detour into the world of caravanning and pencil museums in the blackly comic Sightseers – have been fascinating, compulsive but sometimes frustrating viewing. I couldn’t have been more pleased with High Rise. For me it was note perfect, nailing the three most important things that a director has to consider when adapting a novel: character, setting and style. 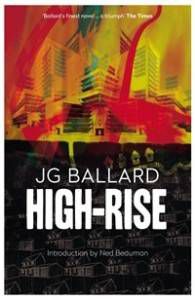 The story, as the title suggests, takes place in a high rise apartment block designed to cater for all the needs of the tenants – containing a swimming pool, school, supermarket and bank. However, the environment has a curious effect on its inhabitants who stratify into groups based on the floor they live on. Social norms begin to strain and rupture and violence and depravity erupt as the inhabitants mentally and physically seal themselves off from the outside world. As you can see, not the easiest subject to translate to film.

Lets start with that first line. How does the film tackle the books opening? With a bravura piece of filmmaking. It follows Robert Laing as he stalks the corridors of a litter strewn building populated by feral children and bizarre denizens. He spots a dog and coaxes it out of its hiding place, seemingly befriending the animal. The scene shifts to his balcony and a leg roasting over a fire. The camera lingers, giving the audience time to recognize a paw and realize with horror exactly what Laing is eating. At this point, I realised I was in safe hands.

Robert Laing, the protagonist of the novel, does not lend himself to a likeable screen portrayal. Animal cruelty is anathema to most people with particular distaste reserved for those who harm pets. (I have been to book groups where people have expressed greater concern over the fate of a dog than human characters.)

Laing is a strangely detatched presence, moving into the building to find anonymity and seclusion. This works in the novel, as the form allows readers to spend more time with characters. There are more opportunities for readers to engage with strange or deviant personalities, understanding them on their own terms or seeing them as a filter into the world of the novel.

The film is successful in exploiting Laing’s position as a liminal entity. He negotiates his place between the hostile elite of the upper floors and the more accepting middle class lower down in the building. He provides an easy surrogate for the viewer to understand the pressures of living in this environment. At first appearing like the only sane man in an aslyum, he slowly deteriorates into his own ticks and habits as he witnesses the events unfold around him.

To really get the audience onboard, you could also cast the ever likeable Tom Hiddleston – and have him appear in various stages of undress.

It is a cliché to say that a location is a character, and yet with High Rise the building is such an important element. It exerts an influence on the characters, and matches their descent into tribalism and violence with its own increasing decriptude.

The film beautifully realizes the building: a brutalist monolithic exterior paired with interiors full of stylized period details. By setting the film in the seventies, the time the book was written, rather than the near future, as suggested in the novel, Wheatley maintains an atmosphere of a social experiment gone wrong. A sense that permeates the book.

Wheatley taps into a normally comforting sense of nostalgia, and then proceeds to distort it, in order to confront the viewer with the ramifications of a class system based on privilege. 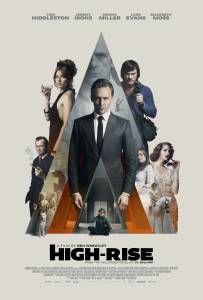 Wheatley recognizes what all good adaptors must: that they are creating in a different form to the source. As a result, his film is stunning to look at. It is full of arresting images and vignettes, vivid palates and kaleidoscopic visuals. It also features the best use of ABBA tracks in a film score that I have ever heard. High Rise draws on all manner of visual and audio resources to create an intense and unforgettable experience for the viewer.

If you love the book, you’ll love Ben Wheatley’s film of High Rise. It taps into the original’s examination of community as well as the mapping between individual and environment, all presented in a beautiful, thrilling and often funny package.