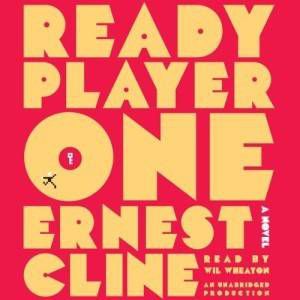 Ready Player One is, in a word, rad. A home run. Totally cool, with memorable and lovable characters, super-fun references to ’80s pop culture and Japanese media pop culture. And it even has a happy ending. It’s one of those books that left me pleased, but also secretly hoping there’d be more to explore in that world. And, it seems, this secret wish will be granted. Ernest Cline is writing a sequel.

That said, it’s actually kind of tough to come up with some solid ideas on what I want out of a sequel. Things could go in so many different directions, and I don’t really want to start thinking about where I’d want the plot to go. I can tell you what my character- and world- related hopes and ideas for the sequel are, though.

I hope that Wade, Aech, and Art3mis are still pals. I hope that enough years have passed that some change has spread around the world, and quality of life has generally improved. I hope that Ogden Morrow is involved, and not as a sort of Santa Claus figure, but at a significant player (maybe even as a villain) who drives the storyline in a less deus ex machina-y way. I’d even be down with some James Halliday action, possibly as a computer program (still good or gone wrong). And in some weird part of my brain, I hope that while some people are still obsessed with the ’80s out of habit or legitimate preference (or simply living in the present), other members of society are now rediscovering the ’90s.

I hope Shoto gets more air time and is fleshed out as a character better in the sequel. And I hope any new characters who are introduced and/or become part of Wade’s gang of friends get a better deal than Daito. If there ever was anything negative I had to say about Ready, it would be its treatment of these two characters. We can do better, especially when the rest of the book is so incredibly well-researched that most folks who lived through the ’80s probably didn’t catch every reference. I expect much better.

That’s about it for my major, hopefully non-spoilery hopes, based on my feelings both immediately after reading the first book (more accurately, listening to it, since I went with the audio), and after having a while to digest it and think back. What are yours?
____________________