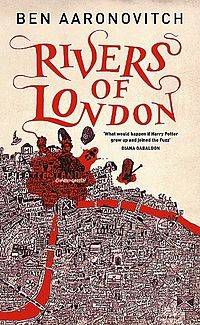 Many of Neil Gaiman’s books offer hidden histories of ordinary places—roadside attractions, cemeteries, Tube stations, and so on. Gaiman is skilled at building worlds around, over, and through the ordinary worlds in which we live, offering not the distant escape typical of many fantasy novels but instead the promise of something fantastic, unusual, and unexpected lurking right under your nose.

In Neverwhere,  one of his most influential works, Gaiman takes these hidden histories quite literally underground. The novel follows ordinary Londoner Richard Mayhew has he inadvertently sinks into the world of London Below, a society that exists under London, in abandoned Tube stations, sewers, and fantastical sort-of spaces. I love how Gaiman teases the extraordinary out of the everyday, giving lost histories for familiar places. The Blackfriars Tube station, for example, is in London Below home to actual monks in black.

This stuff is amazing, so thank God this has been one of Gaiman’s most influential moves. Check out these three books, for example, that owe a pretty big debt to Neverwhere while at the same time building their own fascinating worlds.

Rivers of London (sold as Midnight Riot in the U.S.), by Ben Aaronovitch

The happiest discovery I’ve made recently, this book’s like a cross between Neverwhere, The Adventures of Sherlock Holmes, and a BBC cop show. It tells the story of Peter Grant, a London constable, as he stumbles upon a secret, magical London, hidden in plain sight. He ends up working for a branch of the police concerned with the supernatural, investigating a series of freaky crimes while learning the ins and outs of this secret city. There are local goddesses for all of London’s rivers (and canals), with personalities that fit the parts their rivers play in the geography and life of the city. There’s conjuring and shape-shifting. And there’s even a secret, magical market not unlike Neverwhere‘s delightful one. Rivers of London (I read it in print from the UK, so I’m going with the much superior British title) is raucous fun, messy and layered. And it’s a bit more grittily human than Neverhwere, which has a fairy-tale quality that works well but keeps some of the muck and mire at a distance. And the best part? It’s the beginning of a series. There are two more already and, one hopes, even more in the works.

City and the City by China Miéville

It’s desperately hard to describe this book and not end up sounding like a nutter. Miéville has expressed a desire to write a novel in every genre there is, and this one falls, for the most part, into the realm of the hard-boiled murder mystery. But it’s more complicated than that, since the murder takes place in Beszel, a city that intimately coexists—is essentially interleaved—with Ul Qoma, another very different city. The residents of each city carefully “unsee” their neighbors who live in the other city, and the other city’s streets and buildings, because failing to unsee, noticing the other under your nose, is illegal and policed by a shadowy, seemingly omnipotent power. All this, you might imagine, makes investigating a murder (especially a murder that crosses the borders between the cities) a bit tricky, and it only gets more so as nationalists and unificationists battle out the politics of coexistence, sight, and recognition. In some ways, this is classic Miéville—by which I mean baroquely urban, wildly intelligent, and pretty damned confusing—but it’s also indebted to classic Gaiman. True, the debt here is less direct than in Rivers of London, but it’s there nonetheless, in secretive, layered cities and the secretive, strange people who inhabit them. (Bonus: Miéville’s Kraken offers a Neverwhere-like tour of a magical London that doesn’t quite work but is fun nonetheless.)

I’ll start with a confession: I haven’t yet read this one past the first few pages (which are awesome). I recently found it when, after my last re-read of Neverwhere, I went on a hunt for similar books. From what I can tell, Sedia does for Moscow what Gaiman did for London, and it seems to me like Moscow might be even more ripe for it. Set in the 1990s, after the fall of the Soviet Union, The Secret History of Moscow interweaves the chaotic, lawless post-Communist city with another kind of chaos, magical and mythical. Pulling on Russian folklore, Sedia offers just what the title promises: a secret history of a great city, an offer deeply indebted to Gaiman and the hidden cities of his influence.

So there’s my (partial) list. What do you read when you want to capture that Neverwhere spirit?