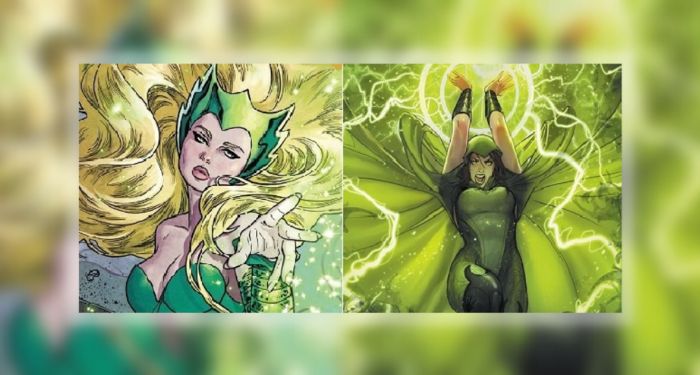 This can lead to fun trivia, like when the makers of The Karate Kid and The Incredibles had to get DC’s permission to use the names Karate Kid and Elastigirl, respectively. Usually, though, the characters involved are so minor (or so in the public domain) that DC and Marvel seem willing to share the benefits of having characters with “same-name syndrome.” It helps that many of those characters are so dissimilar that they are unlikely to be confused by fans. Only rarely are actual court cases filed over characters with the same name: there is only one example of such an event in this article.

So if you want to impress and/or irritate your friends with your incredibly granular knowledge of superhero lore, read on, my fellow nerds, and bask in your ability to respond to questions about who this or that character is with the dreaded phrase, “Well, actually…”

Gods and Demigods, Various and Sundry

Both DC and Marvel have brought ancient Norse and Greco-Roman characters into the present day as heroes, villains, and everything in between. This was perhaps most notable in JLA/Avengers, when Wonder Woman mistook Marvel’s Hercules for the DC version who once assaulted her mother. It didn’t end well for Marvel’s much more innocuous Herc.

Both DC and Marvel have magic-based, evil (ish) characters named Enchantress who are obsessed with green. But while Marvel’s is an Asgardian sorceress bent on dominating the Nine Realms, DC’s is more sympathetic: she’s a perfectly nice woman named June Moone who was possessed and occasionally controlled by the malign Enchantress. Sometimes, June is able to control her just enough to do something heroic.

So if DC and Marvel ever have another crossover, it’s anyone’s guess if the two Enchantresses (Enchantri?) will be on the same side.

As I discussed recently, Marvel’s Tuatara is an obscure, one-shot villain who tangled with Iron Man and, though technically defeated, still managed to escape. DC’s original Tuatara is in many ways her opposite: he is a hero with the Global Guardians (and has a pretty silly costume, it must be said — he’s got a yellow fin on his head!). His successor, however, was a bad guy serving with the Silicon Syndicate.

No one seems to particularly care about any of them, though. That’s a shame — who doesn’t like reptiles?!

This is probably the most notorious example of same-name syndrome in all of comics. The first character to use this name was Billy Batson, created in 1940. Marvel’s version (the first of several Marvel characters to bear the name) came significantly later, with Mar-Vell debuting in 1967. In between, in 1966, we got another Captain Marvel, published by M.F. Enterprises.

Having so many Captains Marvel around has confused readers since at least the ’60s. While you’d think that Billy would have the most right to the name, he has since been forced to rename himself Shazam in deference to Marvel’s newer Marvels. And no one cares about M.F.’s version anymore, even though they once sued Marvel for stealing their name, which they in turn stole from the defunct Fawcett Publications. That’s the circle of litigation, baby!

The biblical version has, like the gods mentioned earlier, appeared in comics by both companies. But Goliath is also the name of several size-changing heroes at Marvel, including Bill Foster, Hank Pym, and Clint Barton. Yes, Hawkeye once stole some Pym particles and gained the ability to grow to giant size. It was a time.

DC has had several Goliaths too, but the most epic version has to be a dragon-bat (yes, a DRAGON-BAT) befriended by Damian Wayne after he…murdered Goliath’s entire family? Maybe that’s just how Damian makes friends…

In DC Comics, Darkstar is a name mired in confusion. The Darkstars are an intergalactic peacekeeping organization similar to the Green Lanterns. Their most famous member is Donna Troy, also known as Wonder Girl and Troia, who at the time was embroiled in some aggravating attempts to sort out her notoriously gnarled backstory.

Meanwhile, over at Marvel, Darkstar is the name of a Soviet-born heroine who has fought crime in both the USSR and the United States. Last I checked, she was never revealed to be a magic clone of an Amazon princess, so points to her for not having a completely messed-up origin.

Finally, we have Yo-Yo, who is a hero in both the DC and Marvel multiverses. But while DC’s version is a relatively obscure member of the Suicide Squad who can alter his density, Marvel’s version, also called Slingshot, is a Puerto Rican speedster who had a recurring role on the TV show Agents of S.H.I.E.L.D. (where she was a Colombian played by a Mexican — close enough!).