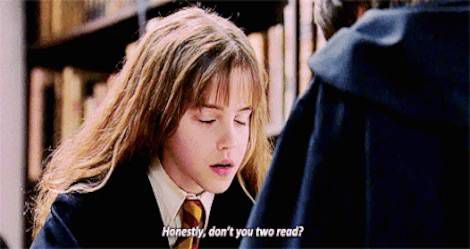 I’m working my way through the entire Harry Potter series right now for the first time in my life.

To be fair, I read books 1-3 when I was in college. I read them during a long, hot summer, wherein I was a teaching assistant for talented middle school students who were studying Shakespeare. I was staying in a dorm room at Northwestern University, where there was no air conditioning, no internet, and no kitchen, so I spent swaths of hours at the local Barnes & Noble or on my bed in front of a fan reading. The kids I was teaching told me I needed to read the series, and since I loved talking books with them, I read part of it.

But as I’m rereading those series entries now, I remember nothing. Sure, I’m familiar enough with the references to get by in conversation, but the plot points? The characterizations? I don’t remember them.

Because surely, if I did, I’d have been as angry about Hermione then as I am now.

If you recall book three, which is where I’m at now, we begin to really see Hermione as a little bit more than a side character. There is much time discussing the fact she’s taking an impossible course load and that she’s regularly studying in order to maintain her perfect grades.

And then, there are the snide remarks that occur.

Her damn cat causes so many problems and that poor rat of Ron’s really needs protecting from it.

There is bickering and endless back and forth, wherein Hermione is positioned as the annoying one and the boys, both of them, are in the right. That their positions are the correct ones, even though they also know that Hermione “might be on to something.”

Imagine that, though. A girl on to something.

At this point in the series, I don’t know what sort of changes are in store for the trio yet, but one thing is for certain: had Hermione had a girl by her side, they would be kicking ass and taking names, even with the story still focused squarely on Harry, the chosen one.

A girl by Hermione’s side would stick up for her. This is especially true at those tender ages of 11, 12, and 13 — biologically, girls are much more mature than the boys, and while they might begin having those romantic feelings towards others, they’re also still kind of disgusted by boys they know. A girl by Hermione’s side would have put Ron and Harry into their places by saying that maybe their thick brains would benefit from listening to someone as hardworking, loyal, and dedicated as Hermione.

Hermione, had she a best girl, would not feel obligated to keep coming back to the boys who don’t treat her well. She’d instead find comfort and security with another young girl, and more, she’d be okay with walking away whenever Ron or Harry chose to ignore her input or treat her like she was merely a sidekick.

She wouldn’t feel the pressure to share her magic, both literal and figurative, with them.

A best gal would say to Harry that Hermione wasn’t speaking shrilly. She was raising her voice because it was necessary in order for her to be heard over their nonsense. A best gal would tell Hermione that it was okay to enjoy being buried in books. And a best gal would also be able to convince Hermione that maybe they could just hang out, relax, and talk about music or movies or good books without the pressure of a test at the end of it.

A girl in Hermione’s squad would love Crookshanks. They’d dress him up in cat clothes and stroke his fur over causal, harmless gossip. They’d talk about their dreams, about what they wanted out of school and after school, about all of the things buried deep in their heart of desire and drive. Hermione would know she wasn’t alone, either in having hunger for a big life nor in in how much she had to fight through to get it, simply because she’s a girl.

When I think about myself at those ages, I remember how the boys treated me. I thought that guys made better friends than girls — something the patriarchy does a spectacular job of ingraining into young girls very early on — but I also had a bunch of girls by my side who loved to encourage me, who loved to spend time together studying so we’d become smarter, and girls who would come to my house or go rollerblading with me when I was feeling overwhelmed (often taking the effort to ask their parents for a ride over, too, since these were the days before we could drive and bike riding was challenging among our cluster of towns). The same girls would be there for me in ways boys never could and would hold the same kinds of grudges I would against those who treated my poorly. Where the boys would push me away when I’d speak up or out, the girls in my life would listen and digest and encourage, even if they didn’t agree. They were the reason I never felt like I had to keep trying to convince those boys I was friend-worthy.

We know that the books center around Harry. But even with Hermione as a secondary character, her life would be so much richer with a girl who she could call her bestie.

Perhaps, though, it begs the question: if Hermione had a solid girl or girl gang by her side, who would hold the honor of being The Strong Female Protagonist in the series?