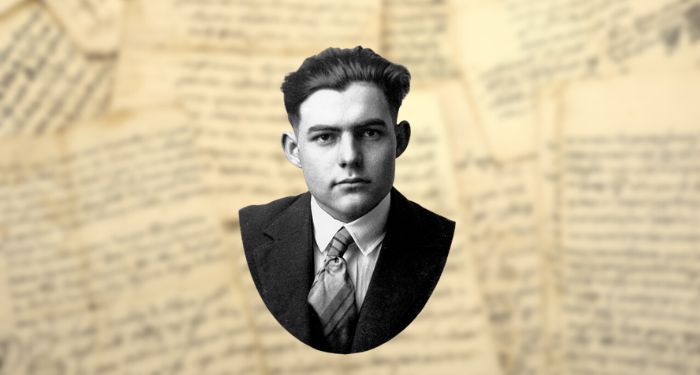 I had a phase in which I was slightly obsessed with books based on the lives of historical figures. In the same way I enjoy getting to know celebrities through memoirs, I also like getting to know influential people through a romanticised piece of writing. These novels, although not always 100% factual in their retelling of events by any means, are often a great ramp to getting to know the actual story.

In 2016, after ordering a batch of fictionalized novels featuring famous people, I picked up The Paris Wife, by Paula McLain. The book’s main character is Hadley Richardson, Ernest Hemingway’s first wife.

I liked the story; it did not try to hide Hemingway’s often assholeish tendencies (especially towards his wives), but there is a scene in the book that still haunts me to this day.

At some point in the story, Hadley and Hemingway are in two different countries: Hadley is in their home in Paris, and Hemingway in Switzerland. They decide Hadley will travel to meet him, and when preparing for the trip, she takes with her all of Hemingway’s manuscripts, a whole two years worth of his work. She pops the manuscripts in a suitcase, and leaves for the train station. Once there, she finds a seat, places the suitcase under the seat, and steps outside to get water.

I think it is worth noting that, at this point, I knew nothing about Hemingway’s life, and I was unaware of this very real episode. But as I was reading the scene where Hadley leaves the suitcase behind, I kept screaming at the pages. I was not surprised, though still horrified, to find that the suitcase simply disappears a few pages later. We learn later that it is never found again.

What caught me by surprise the most in this whole incident was the fictional Hemingway’s response: he did not burst into a fit of rage, nor did he disappear to be with himself for a while. After learning that his wife lost two whole years of his writing — in my opinion, out of carelessness: who abandons a suitcase filled with writing on a train?? — Hemingway simply did his best to stay calm and assure Hadley that it was okay; since he had written all of that once, he could write it again.

In the face of this, I went in search of the true story, to confirm whether Hemingway — an often violent man — had reacted with such uncharacteristic calm. Had McLain decided to assign him some redemptive traits? Was this whole event completely made up?

It turns out there is more than one version of the story. Some sources note Hemingway was the one who requested Hadley bring his manuscripts when an editor asked to see more of his writing. Other accounts — like the one in The Paris Wife — offer that the idea to bring the writing came from Hadley herself, as a surprise for Hemingway.

What the book does not talk about is that Hemingway’s IRL reaction was that of a man who thought he had only lost part of his writing — and that later back in Paris he discovered that Hadley had also packed the carbon copies for all of his manuscripts. It was gone gone, all of it, including several short stories and the draft of a World War I novel. None of this is noted anywhere in the book.

In the face of Hemingway’s composed reaction, I’ve often thought to myself that he might have been a better person than me.

My Own Personal Loss

In 2020, I decided to take part in NaNoWriMo for the first time. I had a brand-new story in my head, the beginning of a plot, fun characters, so I set myself up to finally finish a manuscript — something I hadn’t done since my teenage years. I even decided to finally get the Scrivener app on my iPad, because I had heard so many good things about it.

As November started, my mind was on fire: I was writing this fun story, the words were flowing, and I was sure I would be able to actually complete NaNoWriMo this time around.

Then, on one fateful day, the syncing between Scrivener on my iPad and Dropbox mysteriously failed. As I opened the document containing all of my writing, and the Dropbox saved files (and no, I had not considered making an extra copy because I was using an app everyone was raving about which had its own backup), I realised a big part of it was gone.

Now, this did not account for all that many words as it was on day three or four of NaNoWriMo. But with the loss of my story, I felt unable to carry on writing. Because, you see, that first draft seemed so well done; I didn’t know how to recover the words I had become so fond of. I cried and sent emails to try and recover the manuscript to no avail. In the end, I simply resigned myself to the loss, and I haven’t picked up that story ever since.

This was all a fluke of technology, of course. I tried to imagine how I’d have reacted if someone had actually taken my writing and been so careless with it, and it really made me wonder how Hemingway didn’t just burst into flames right then and there (especially since writing was his whole career — it has never been mine). I’m not saying I would have divorced Hadley, but I truly expected Hemingway to just tell her they were done given what we know about his temperament.

Many years later, I’m more and more convinced that the best way to write anything is to write it once, scrap it, and write it all over again with a better view of the subject at hand, that Hemingway’s “I wrote it once, I can write it again” is actually quite reasonable. With some distance and clarity, maybe it is time to pick up my novel again. And Scrivener, too. Maybe Hemingway was a bigger person than I was when the wound of my loss was fresh. And yet…

While doing some extra research for this post, I came across a story about how, after a few drinks, Hemingway would sometimes joke that he divorced Hadley because of the lost manuscripts. I knew he couldn’t be that good.