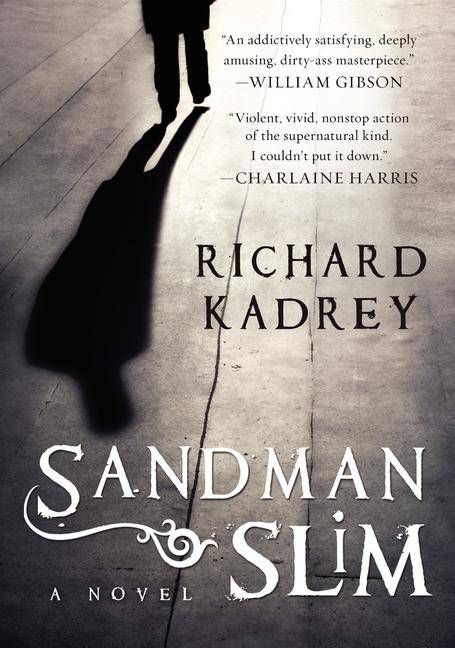 This is a guest post by Alison Peters. Alison surrounds herself with books, green things, animals and love. A Creative Writing M.F.A. holder with a day job that shall not be named, Alison is also working on a Masters in Library and Information Science. Currently cohabitating with her partner in the Northernmost outpost of San Francisco’s East Bay, she spends her spare time exercising her big dog so he won’t get annoyed with her, reading everything she can get her hands on, and then writing about it all. 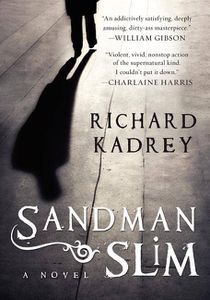 We were on rocky ground. For years, my partner and I struggled to find a book, just one book we could mutually agree on loving. My hope was to achieve the dream of coffee and a novel in bed on Sunday morning, the two of us quietly reading together. Hers was to find something so I’d stop asking if she liked whatever I was currently trying to get her to read.

Richard Kadrey’s supernatural-ish Sandman Slim series isn’t my normal fare. I fully admit to being a sucker for vampire/human/other love triangles, earnestly magical adolescents, teenage death battles, and absolutely anything with a dragon, or two. My partner loves murder and mystery, Koontz and King, and scoffs at just about anything in the lit or fantasy genres.  But the minute I read Sandman Slim book one, with its darkly humorous namesake appearing, Terminator-like, in the Hollywood Hills Cemetery after a years-long stint in hell (he wasn’t even/ever dead!) and commencing to enact bloody revenge on everyone in his righteously angry path, I was hooked. See, James Stark, affectionately nicknamed Sandman Slim by his down-there, Hellion comrades, is half-man/half-angel, sometime conqueror of the underworld, possible Satan-spawn, nonchalant wielder of the dark arts, on first name friendship with God(s) with an ‘it’s complicated’ relationship with the Devil(s). He’s one seriously fucked up anti-hero, and a fantastic antithesis to the usual fantasy outings.

In Stark’s world, everyone packs heat, there are Lurkers around every corner, and shoot-outs take place on the regular. There are references to bad martial arts, spaghetti westerns and monster movies every other sentence, so it follows that the novels are like Quentin Tarantino flicks on steroids. Seriously: imagine the kind of straight up blood & gore that takes place in say, Reservoir Dogs, and then put that on every other Slim page. Stark’s bff is a previously-full-bodied head-on-wheels; he counts among his ex’s an Eastern European porn star who moonlights as a zombie hunter; and his current flame is a purposely-vapid, hilariously star-struck, lethal Jade (like a vampire, but Jades frown upon putting a perfectly good, nourishing corpse to waste when they’re done with the blood). As Kill City Blues opens, Stark and his cronies are posted in the penthouse suite of Hollywood’s storied Chateau Marmont, living the good life, basking in free food, booze, and laundry service, and updating their Wikipedia pages while waiting for the next bad guy to knock on the door. Or in this case, knock on the suite’s secret entrance, the grandfather clock. Enter the Qomrama Om Ya.

Sandman spent his time in hell cage fighting monsters and demons for the amusement of the fallen Angels and their friends. He’ll kill anything that looks at him askance, and remorse isn’t a word in his vocabulary. Sadly, for my suddenly blood-thirsty imagination, but in a bravura show of character growth, the first bona fide Sandman killing doesn’t take place till almost page 100, and then, it’s not real people that die. (I would warn you with a  ‘spoiler alert’, but most of the individuals populating this world, set in present-day Los Angeles with hell as its bizzaro-mirror-image underworld (think Atlantis with more brimstone), are not quite human anyway, so really, you’re all good.) Stark, as he prefers to be called now, has grown since his return from Hell, and now our black-hearted bad-boy is using his heart. But the stakes are higher than ever. The afore mentioned Qomrama Om Ya, a sentient 8-ball type ancient weapon whose purpose is to summon to earth the original, pre-God gods, is stashed somewhere in L.A.’s vast infrastructure, just waiting to fall into the wrong hands so havoc can be wreaked on the entire world as we know it. Stark, now with loved ones to protect and a future to hope for, cannot let that happen. It’s a Robin Hood tale of the bad guys (Sandman & Co.) robbing the even badder guys, who, in a neat twist, consist of the government, allied with angels, and sometimes the actual, Biblical God. It’s no longer simple to define good vs. bad, human vs. monster, God vs. the Devil. Each entity has faults, goes on killing sprees, and makes really bad decisions that affect the fate of the world.

Heartwarmingly, after all the gore and guts, the Sandman Slim series is a relationship mender. The day Kill City Blues arrived at my house, I whooped with joy, tears forming in my eyes.

See, after reading the first book, I devoured the next three and shared them with my partner. She read, and kept reading, for the foul-mouthed language, mystery, monsters, and ass-kickings galore. And I got a highly researched spiritual meditation on the state of heaven and hell, and characters that live hard, die brutally, and in the meantime, change and grow.  We’re both now up late nights reading the series, with me jealous that she’s still got two to go, her warning me that I’d better not spoil anything for her, and both of us bonding over what is just about the best series most people I know have never heard of.

Kadrey is scheduled to appear at San Diego Comic-Con, as the dark, action-packed series is being developed for the big screen. No, it won’t be as good as the books, but it sure will be fun to watch, and then discuss on Sunday morning.