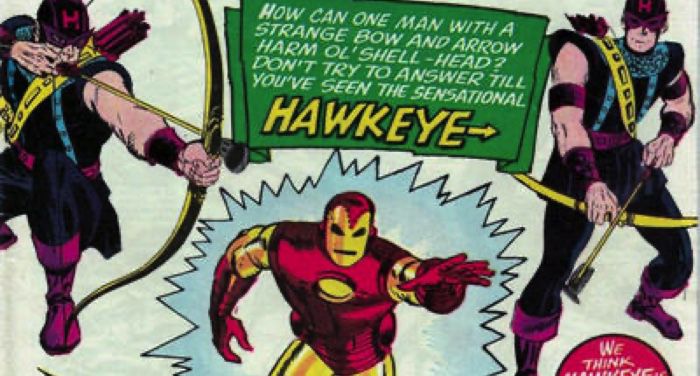 Superheroes have been around a long time, and most of the characters and genre conventions are pretty well established. But did every character always look and act the way we expect them to today? In this series, I’ll be looking at the first appearances of iconic superheroes to see what’s familiar, what’s fallen by the wayside, and what’s goofy as heck. Today: Hawkeye!

…Specifically, the first Hawkeye, Clint Barton, who debuted in Tales of Suspense #57 (September 1964) and was created by Stan Lee and Don Heck. Though arguably B-list at best, Clint is a longtime member of Marvel’s top tier superhero team, the Avengers, and Jeremy Renner’s version of the character has been kicking around the MCU since all the way back in 2011’s Thor. He’s now appearing alongside the other Hawkeye, Kate Bishop, in their eponymous show which looks to be largely inspired by the beloved 2012 comic by Matt Fraction and David Aja. But was Clint always the lovable loser of the Fraction run? Or the…uh…okay, surely the MCU version has a personality trait somewhere in there, but I can’t think of one right now. Whatever, let’s look at his first appearance!

Originally a sci-fi anthology series, Tales of Suspense was by this time headlined as Iron Man. And so when Clint first appears, it’s as a villain to Iron Man, much as Black Widow had been when she debuted five issues before. As we’ll see, though, his heart isn’t really in it.

Our story begins with Iron Man rescuing one of the workers at Tony Stark’s weapons factory from a potentially deadly accident, which is the only time in this story Tony will accomplish anything at all. Then we spend a little time on the obligatory Marvel Silver Age love triangle between Tony, his secretary Pepper Potts, and his chauffeur Happy Hogan, complete with angsty thought balloons all over the place.

The upshot of all this thwarted romance is that Tony and Pepper end up on a date at Coney Island, where one of the acts is Hawkeye, “the world’s greatest marksman,” who is dressed like Davy Crockett for some reason:

Everyone hates Hawkeye, because this is the Marvel Universe, where the population at large is ready to randomly hate anyone at the drop of a hat in order to set up a good origin story. (Or even a middling and very silly origin story. Ahem.)

While Hawkeye’s in the middle of his act, one of the rides suddenly breaks. As a Brooklyn native, I can tell you that this is extremely plausible for Coney Island. Naturally, Tony switches to Iron Man and saves the day, much to Hawkeye’s unreasonable irritation:

Clint, buddy, no one loves superhero archers more than I do, but you were target shooting from four feet away, and he just saved dozens of lives. A little perspective, please. (This issue, by the way, takes place during the lengthy period in which Iron Man’s cover was that he was Tony Stark’s bodyguard, which makes absolutely zero sense and thus I love it.)

Hawkeye reasons that all Iron Man has going for him is gadgets, and gadgets could probably very easily be put on arrows, and then everyone would think Hawkeye is just as cool as Iron Man, wouldn’t they? He proceeds to whip up a costume and a bunch of trick arrows:

Maybe he’s overcompensating for something else.

Hawkeye’s initial plan is to compete with Iron Man as a fellow superhero, though he’s not particularly motivated by, like, helping people or anything like that. His first night on patrol, he spots a thief robbing a jewelry store and startles him into dropping his loot:

My favorite thing about this issue is how Hawkeye is just constantly talking about how awesome he is inside his own head. Would that we could all have such confidence.

The police arrive on the scene and assume that Hawkeye is the thief. He flees on foot until a coincidentally passing car offers him a lift:

Why, it’s the Black Widow! Not yet a redhead or a hero, already extremely glam, definitely ten times smarter than poor dumb Hawkeye, bless his heart. She takes Hawkeye to the cutting edge laboratory in her subterranean lair in the suburbs; the only part of this that he thinks is odd is that she’s too pretty to be a scientist. She gives him a non-explanation that definitely doesn’t mention that whole thing where she’s a Soviet spy, and offers to help him make fancier arrows, with the object of defeating Iron Man.

With his new arrows, Hawkeye heads off to the Stark Factory to confront Iron Man, and shoots him with…rust arrows…

“Rust! My one weakness!” God I love comics.

Tony runs off to find another suit, while Hawkeye steals the discarded pieces of the first one and flees. We spend a full page on the earth-shattering tension of Tony not being able to find his right boot. This may not have been Stan Lee’s best work.

Tony tracks Hawkeye down, but unfortunately for him, Hawkeye has somehow figured out his other weakness…

Some rope! Curse that dastardly marksman!

Tony defeats the dreaded rope and pursues Hawkeye onto a pier, which he destroys. We then reach my absolute favorite incidence of this comic’s sheer disdain for the laws of physics:

Absolutely livid that this wasn’t in any of the Avengers movies.

Unfortunately for Hawkeye, while Iron Man is vulnerable to rust and rope, he is immune to explosions. The DEMOLITION BLAST bounces off of him and hits Natasha, somehow(???), and she promptly faints, because she is a woman in a 1960s Marvel comic written by Stan Lee.

In a panic, Hawkeye carries her to the safety of her waiting boat, declaring that “She’s the only one I’ve ever loved!!” You have known her for three hours, Clint. Iron Man is unable to pursue the boat because they’re too close to LaGuardia Airport and he doesn’t want to cause a plane crash, which is both remarkably responsible for Tony Stark and astonishingly lukewarm as an excuse to end the story with the villains still on the loose.

But there are two panels left to the story, in which our creative team hastily remembers that this is a Marvel comic and so we have to end on a note of a tragic hero nobly suffering, even though the worst thing that happened to Tony in this story was that Pepper and Happy went to the drive-in without him:

Truly, he walks a lonely road.

And that’s it for Hawkeye’s first appearance! There is very little in the way of personality here, and most of it is villainous: he’s self-involved, vengeful, and dumb as a brick. He doesn’t even have a real name yet!

He would appear as a villain twice more in Tales of Suspense before making a heel-face turn and joining the Avengers the following year. He’s been strongly associated with the team ever since, a fact the movies have obviously compounded, but as noted above, proved he could hold his own (well, with Kate Bishop and Pizza Dog’s help) in the 2012 comics series. Will the Hawkeye show do the same for Renner’s version? We’ll find out soon!

And if not…back to the Davy Crockett outfit, I guess.

Want more Hawkeye? Check out his sartorial history in my Fashion Disasters profile of him here.