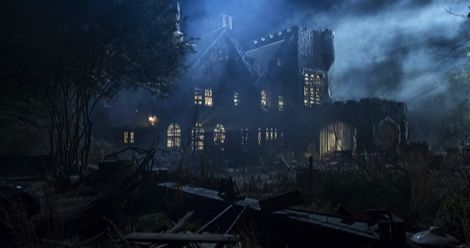 Hill House, not sane, stood by itself against its hills, holding darkness within; it had stood so for eighty years and might stand for eighty more.
—The Haunting of Hill House, Shirley Jackson (1959)

You couldn’t exactly call The Haunting of Hill House miniseries an adaptation of Shirley Jackson’s classic novel. In an interview with The Hollywood Reporter about the finale (spoilers), director Mike Flanagan referred to his approach to the story as “a remix.”  The ten-part series, which dropped on Netflix on October 12th, focuses on the Crains, a family of seven who move into an old house to restore and eventually flip it for the funds to build their “forever home.” Unfortunately for them, Hill House is an extremely dangerous place and not everyone survives the experience. The remaining family members are left with lifelong scars from their time there.

In Shirley Jackson’s novel, three strangers are invited by a doctor (the novel notes that he is a doctor of philosophy) to live in Hill House for the summer to assist in his paranormal research. Two of the three participants had prior paranormal experiences, the third was related to the current owner of the house. The house quickly begins to disturb their sleep and enter their minds. There are a lot of interesting callbacks to The Haunting of Hill House in Flanagan’s version. I went back through the novel and made a list. The miniseries is definitely faithful to the spirit of the novel in which one is never quite sure whether the happenings are supernatural or the product of the characters’ imaginations (or exposure to black mold, or underground rivers, or any other explanation besides than ‘the house is insane’).

Hill House: The narration provided by Steven at both the beginning of the first episode and the end of the last, are the opening and closing paragraphs of the novel with one notable change that is particular to the Hill House of the miniseries. One might say that the one character that is unchanged from the novel is the house itself. The haunting in the miniseries is more visual—in the novel we never actually see the source of the disturbances—but there is shaking and banging and writing on the walls. In both cases, the writing is directed to Eleanor/Nell, who is most affected by Hill House (at least in the novel—a case can be made that several of the Crain children were affected just as severely by the house in different ways.) The house is described as feeling the movements of the people within it both in the book and in Nell’s explanation that the Red Room is the “stomach” of the house. 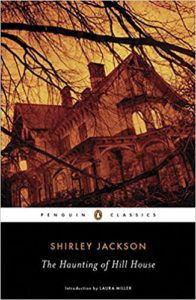 The Crain Family: In the novel, the original builder of Hill House was a man by the name of Hugh Crain. He purposely made everything in the house just a little bit off—no right angles, doorways off-center, and the overall effect is disconcerting and contributes to the strange atmosphere of the house. Theo, Eleanor (“Nell”), and Luke are named after the people who were invited to Hill House in the original story. Shirley is, of course, named after Jackson herself.

The Dudleys are very different in the novel—Mrs. Dudley barely speaks to the participants in the experiment other than to tell them when she lays out meals and that she will not remain in the house after dark. She reminds each of them that no one will be able to hear them if anything happens at night. Mr. Dudley threatens everyone who arrives at Hill House and then is never seen again. At first, I was taken aback by the warmer Dudleys of the miniseries. I did not expect them to be such a big part of why the house was left standing.

Nell’s “Cup of Stars”: Mrs. Dudley tells Nell to “insist on [her] cup of stars” when she discovers a little girl’s tea set that includes a cup with stars at the bottom. This is a callback to something Eleanor witnesses in a restaurant on her way to Hill House in the book. A little girl refuses to drink her milk, or anything else, unless it is served in one particular cup. She wants to tell the child to insist upon her cup of stars because to acquiesce to her parents will trap her “into being like everyone else.”

Raining Stones: Olivia’s story about it raining stones a few weeks after her father died was actually the reason Eleanor Vance was chosen to come to Hill House in the novel. Speaking of stones, Theo’s story about getting hit by her mother as a child for throwing stones through a greenhouse roof and then doing it again is also a callback to the novel.

Journeys End: In the novel, Eleanor is constantly ruminating on the phrase “Journeys end in lovers meeting,” which is also how Olivia greets her husband at the end of the film. Similarly, Poppy Hill (or as I called her “the art deco ghost”) sings a song about the dead Gratton family which also originates in the novel.

I was very impressed with The Haunting of Hill House. Such realistic family drama! So many hidden ghosts! A second season is possible but has not yet been announced. I am particularly interested in the lives of the people who lived in Hill House before the Crain family moved in—we got bits and pieces, but I really wanted some kind of written timeline. Has the journey truly ended? Can it, while Hill House still stands?