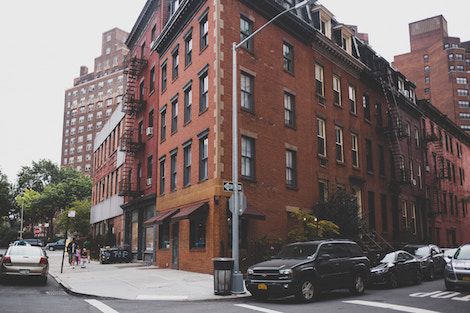 The Chelsea Hotel, currently closed for renovations, sits at 222 West 23rd Street between Seventh and Eight Avenues. It is a beautiful red-brick building, built with a mixture of Victorian gothic and Queen Anne style. There are wrought iron balconies and a grand staircase located in the middle of the hotel. 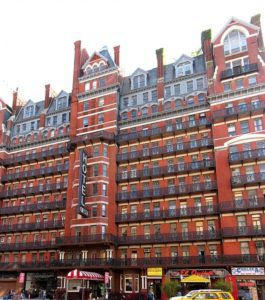 The Hotel Chelsea is the #2 “hot spot” for ghosts in New York City.

This is the Chelsea Hotel, a “cauldron of creativity,” a place that every artist around the world knew about and set out for. The Chelsea Hotel roster of residents and transients (transient being the Chelsea Hotel reference for repeat visitors) includes, but is not limited to, Mark Twain and actress Sarah Bernhardt, political radical Elizabeth Gurley Flynn, Thomas Wolfe and Dylan Thomas, Bob Dylan, Patti Smith and Robert Mapplethorpe, the Grateful Dead, Janis Joplin and Leonard Cohen (Cohen immortalized his meeting with Janis Joplin in his song, Chelsea Hotel #2), composer Virgil Thomson and Lou Reed. Andy Warhol filmed here and Madonna photographed her book Sex at the Chelsea.

That question blends in quite easily with the next very frequently asked question “Why does the Chelsea Hotel have so many ghosts?”

For the fifteen years that I was a regular transient, from 1995-2010, when the Chelsea Hotel closed its doors, I never encountered any ghost – perhaps because the spectral spirits thought I was benign and not receptive to their message. I did stay in Room #124 for five nights, six days, a room that was reported to be haunted. When I came back one afternoon, the water faucet was on, but I attributed the cause to bad plumbing, and I continued to have a sublime day.

It was when I saw Christopher Moltisanti, aka actor Michael Imperioli, when I was cable channel surfing and came across the beguiling program, Celebrity Ghost Sightings, and I was struck by the actor’s complete terror: fourteen years after he had fled the Chelsea Hotel, Imperioli remained terrified.

I learned, from the excellent reporting from the blog Living with Legends: The Chelsea Hotel Blog, that Imperioli had encountered Mary, the Titanic survivor and well-known ghost of the fifth floor.

According to reports from several mediums and paranormal sleuths, the Chelsea Hotel housed survivors from the 1912 sinking of the Titanic. Mary was one of the survivors. She had lost her husband when he sank with the Titanic.

Mary became distraught, depressed and was never able to adjust to life after the Titanic. She hung herself in her room on the fifth floor. Mary is most often found at the west end of the building where the archway is in that hallway, where the original large apartment’s entryway would have been. Mary is checking herself in the mirror – she is referred to as the vain ghost.

One thing to remember, Mary does not like to be bothered by the living, so if you do see her, do not expect any welcoming words or gestures. Mary perceives the living as an annoyance – little wonder that she gave Michael Imperioli a sign that he was not wanted in her ghostly space.

Then there is Nadia: the severed hand ghost. Ten years after Mary made her fate, in 1922 the New York Times reported on a young woman in her twenties who flung herself out of the window facing 23rd Street and meeting her death on the sidewalk. Before her fatal plunge, Nadia had placed her right hand in the middle of huge industrial scissors used to cut bolts of cloth, closed the scissors and cut off her right hand. The pain was more than she expected – therefore, she threw herself out of the window.

But Nadia’s self-immolation was understandable. Nadia had grown up in the Hotel Chelsea, the spoiled daughter of a wealthy silk merchant whose family lived in a posh suite of rooms in the Chelsea Hotel. Nadia was an artist, but her plans to pursue her artistic vision was cut short when she met a handsome and rogue dandy songwriter and ran away to get married when both were still in her teens. Within a few years, Nadia’s handsome husband had slipped into alcoholism and she had two young children and her husband to contend with.

Nadia returned to the Chelsea Hotel and pleaded with her wealthy father to return to the Chelsea Hotel, they had nowhere else to go and her husband was of no use at all. Nadia’s father, still enraged that Nadia had left his household to marry a drunken songwriter and then immediately had two children without any means of supporting them, relented. He let Nadia and the family return to the Chelsea Hotel, but there was one condition: Nadia was responsible for all the housework and cleaning, as well as bringing in piece-work sewing to add to the household income, and also had to hand wash her mother’s underthings (a constant activity, since Nadia’s mother was incontinent).

Life became too much to bear for Nadia. She still tried to carve out a few minutes for her art, but it was impossible. Nadia’s hands were becoming ruined from the never-ending housework. Hence, on a moonless night, Nadia cut off her right hand and left her tragic existence.

It is on moonless nights that Nadia can be seen flitting outside the windows of the upper floors of the Chelsea Hotel, her long hair and wispy white gown flowing behind her. She wants to come back to the Chelsea Hotel, but she cannot find her way back inside the hotel.

A more recent ghost, with no timeline available regarding his admission to the Chelsea Hotel ghostly crew, is Larry the Hipster ghost.

According to verified reports from a medium who relayed her findings in the Living with Legends: Chelsea Hotel blog, Larry the Hipster Ghost is distinctive because he never stops talking. Larry is so anxious to tell his story, that much to the annoyance of his fellow ghosts, Larry invariably pushes himself to the front of every ghostly gathering at the Chelsea Hotel to share his wisdom.

Now, the question remains: will these ghosts remain at the Chelsea Hotel when the doors of the hotel are opened again?

I believe they will remain. The Chelsea Hotel has experienced bankruptcy and changing owners and scandal and headlines throughout its 125-year-old history and the spirits remained. I just want to see them the next time I make my Chelsea Hotel pilgrimage.