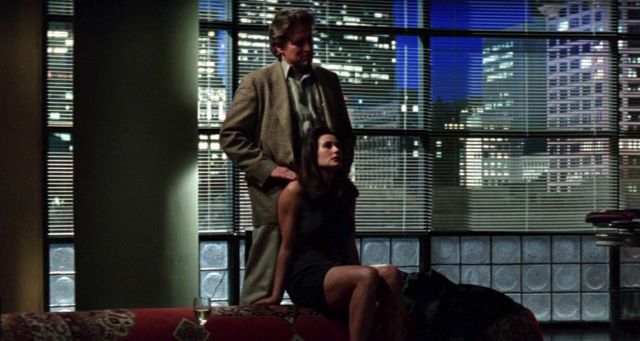 When I was in grade school, my tittering classmates and I would pass around a battered copy of Michael Crichton’s Disclosure, where we all made straight for the pivotal sex scene. I doubt any of us read the full novel at the time; I certainly didn’t give a damn about corporate conspiracy or tech-industry shenanigans. 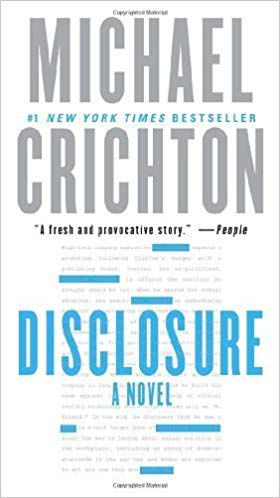 I didn’t understand everything in this one passage I did read, but I got that it was titillating. Now, on rereading, it makes me uncomfortable to realize that my early ideas of hotness were even in small part informed by this scene of violence and dubious consent. Newly appointed executive Meredith Johnson has her assistant lock the door so that she can more efficiently harass Tom Sanders, for god’s sake. This has echoes of Matt Lauer’s disturbing door-locking button.

The rest of the book makes for similarly queasy reading now. Disclosure has always been a problem just as a narrative. It undercuts its own central premise—that women in positions of power will abuse those positions for sexual gain just as much as men—by making the central sexual harassment case a red herring. For Johnson (the improbably attractive and villainous harasser), sexually pressuring Sanders (the bland family man who’s meant to be an avatar for *good guys* everywhere), is a means to an end. It’s not equal-opportunity sexual harassment, as Crichton so vociferously argues in this book, if the women in power aren’t actually doing it for the sex. They’re still monstrous for doing it, of course, but their use of sex to get ahead deviates from the pattern we’ve now seen unspooling in too many real-life cases, of powerful men doing it because they want to and can.

In some ways Disclosure is like a time capsule from a more innocent era. The technology is inevitably dated (although the virtual reality system for accessing databases makes filing systems actually look fun). DigiCom sounds like an absurdly on-the-nose name for a fictional tech company. And there’s actually an explanation midway through the book of what the internet is.

More seriously, the characters’ frustration with workplace diversity drives, like their mockery of political correctness culture, points to the naïveté of a ‘90s West Coast tech culture that assumed that technology products could be politically neutral. Now that we’ve seen the damage that algorithmic bias, to take just one example, can wreak, it’s clear how misguided is their faith that technology can remain solely technical.

Take this speech from volatile product design head Mark Lewyn: “Pale males eat it again. I tell you. Sometimes I get so sick of the constant pressure to appoint women…I mean, look at this design group. We’ve got forty percent women here, better than any other division, but they always say, why don’t you have more…It’s hurting everybody. Look: when I started in DigiCom, there was only one question. Are you good? If you were good, you got hired. If you could cut it, you stayed. No more. Now, ability is only one of the priorities. There’s also the question of whether you’re the right sex and skin color to fill out the company’s HR profiles. And if you turn out to be incompetent, we can’t fire you. Pretty soon, we start to get junk like this Twinkle drive. Because no one’s accountable anymore. No one is responsible.”

It’s hard to know how much of this Crichton agrees with. Protagonist Tom Sanders is certainly uncomfortable with some of Lewyn’s excesses. But by making villainess Meredith Johnson so incompetent and clueless that she has to resort to a convoluted sexual harassment strategy to cover her tracks, Disclosure suggests that underqualified women are indeed rising to the top.

And Johnson’s machinations don’t end with her allegations of sexual harassment by others, while being a harasser herself. She also gives herself an extreme makeover to resemble her boss’s recently deceased daughter, so that she can step into the role of daughter figure. This is peak ‘80s/‘90s Michael Douglas–targeted wickedness. Womanly wiles, as imagined by an old-fashioned male sensibility, abound. (This doesn’t even get into the vengeful female journalist character who basically froths at the mouth over the possibility of bringing Sanders down.)

Obviously, women can be victimizers. The assumption that women don’t have the capacity or the imagination to abuse power is both lazy and strangely sexist in its own right. This point of Crichton’s is valid, even if much of the novel’s messaging is confused.

Crichton notes in the afterword that the novel is based on a real-life case, and Disclosure is an anxious book. It reflects deep anxieties over a culture, in the workplace and beyond, where women’s power is rising and the norms of male behavior are changing. They’ve changed even faster since the start of #MeToo. The question remains whether cases like the one Disclosure is ostensibly based on will be used as fodder for men’s rights activists stubbornly clueless about how sexism is baked into social structures, or as a way to initiate genuinely thoughtful and useful conversations about shifting expectations on the road to greater gender equality.

The briskly cynical lawyer Louise Fernandez, who’s not a character so much as a mouthpiece for Crichton’s views, expresses some confidence that the new rules of male-female interaction will settle quickly. But she also reflects, chillingly,

“It’s terrible to say it…But in the real world? With no witnesses? Alone in the office with his boss? He probably should have shut up and fucked her. Because right now, that poor bastard has no options at all. If he’s not careful, his life is over.”