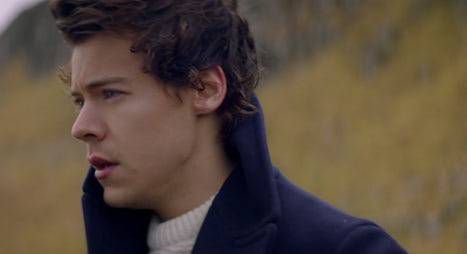 Harry Styles seems to live and breathe in romance hero mode. Not just because he’s Harry Styles (though that plays a part), but because the first thing I thought of when I saw the music video for his debut solo single “Sign of the Times” was Mr. Fitzwilliam Darcy. Specifically Matthew Mcfadyen as Mr. Darcy in 2005’s Pride and Prejudice. The knee-length navy coat, the high collar, the heeled boots, the wind-tousled hair. Someone may as well have taken a Mr. Darcy Pinterest board and slapped it on Harry Styles. In the interest of making more of my English syllabi dreams come true, Harry wanders a blustery landscape that looks not unlike the Brontë’s moors. When he’s not on the ground, he’s in the air. Like Peter Pan, he’s suspended above water and land and becomes a speck against billowing clouds.

Peter Pan is the perfect character for Harry Styles to evoke as he leaps into a solo career. By now most of us know Harry’s origin story: losing X–Factor contestant spurred by judge Simon Cowell into uber-successful boy band One Direction. Now, and perhaps forever (or at least until the reunion tour ten/twenty years from now), One Direction’s on hiatus, and twenty-three year old Harry is leaving behind his boy band beginning and growing up.

What a scary thing to watch one of One Direction’s beloved members ascend to young adulthood. Even more scary because One Direction was made up of five Peter Pans, minus the arrogance and selfishness. Their charm was in how they weren’t boys as in “boys will be” but sweet, joyful boys who were appreciative and respectful, who loved each other and didn’t hide it, who loved their mostly-female fanbase and didn’t hide that either. They sang to you. They’d never downplay you reattaching their shadows for them. They were always aware of your feelings and willing to talk about theirs. But if they grew up, would they have to trade in this open-heartedness for something more manly?

Harry Styles says nope. Drifting through the air he sings “just stop your crying, have the time of your life / breaking through the atmosphere / things look pretty good from here / remember everything’ll be alright / we can meet again somewhere / somewhere far away from here.”

It could be Peter to Wendy, albeit a more well-adjusted, more mature Peter, not as naively certain the only happiness worth having is in Neverland. Even Harry’s declarations that “we gotta get away from here” is less a call to flee and more to stand your ground when it’s followed by a pleading bridge that says “we don’t talk enough, we should open up / before it’s all too much”.

Yep, still romantic. Still sweetly earnest, even as Harry proves to possess an anti-Peter eagerness to grow.  It was his idea for One Direction to take its hiatus, and in a dreamboat interview with Rolling Stone, Harry says, “I wanted to step up…Every decision I’ve made since I was 16 was made in a democracy. I felt like it was time to make a decision about the future …and maybe I shouldn’t rely on others.”

This growth is working out well for Harry thus far, and I’m not just saying that because he marked his first solo video by evoking an eternal child in a Mr. Darcy coat against the backdrop of an isolated woodland (but that is very important). It’s because Harry’s straddling a line between what boys and men are supposed to be. In literature we get the boy wonders like Peter and the cynical and tortured men like Emily Brontë’s Heathcliff with a few variations and exceptions to the rule along the way. But Harry decides to be the best parts of both. He flies like Peter but doesn’t go so far away that he can’t marvel at the wild beauty beneath him.

Depending on who you ask, the moors can be terrifying or liberating. If you ask Harry, he’d probably say the latter because “Sign of the Times” is packed with gorgeous countryside. Everything (including Harry) is windswept and alluring. If you’re not looking at nature (like a waterfall reminiscent of one near the village where the Brontës lived) you’re looking at Harry and his coat flapping in the wind, half expecting Heathcliff’s ghost to appear and demand this kid get off his moor. He’s got Heathcliff’s appreciation for nature without all the inner torment (by his own admission Harry’s got nothing to torment him and has declared “there’s nothing worse than an inauthentic tortured person”).

For every entrancing gaze directed at the camera there’s a wondrous, giddy smile as Harry floats through the sky. He’s a man now, but he can still fly and be amazed by what he sees while he’s up there. He’s not Heathcliff, who will be endlessly tormented by your rejection. And he’s not Peter, who sees right through you and thinks he’s the greatest there’s ever been. While that coat is definitely a look, it only screams Darcy because he’s my preferred Austen hero, but he could be any of them (Wentworth, anyone?).

The young women and girls who followed One Direction already know about Harry’s romantic bonafides. The women who are just now being introduced to him have some catching up to do, but they’ll figure it out soon: Harry Styles wants to be your romantic hero, and he will be if you let him.