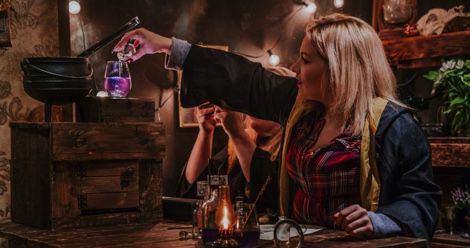 Start your 14-day free trial and enjoy the perks of exclusive podcasts and emails, the New Release Index, and behind-the-scenes access.

The class goes far beyond the typical pop-up bar experience, adding Harry Potter flair by using more than just a few Hogwarts-inspired decorations. When you arrive at the one hour, 45 minute class, you’ll get a robe and an internet-connected magic wand that you’ll use to activate aspects of your workstation. You’ll brew two delicious cocktails that change color, bubble, and smoke within your cauldron, all the while sipping mead and a special limited-edition beer from Six Point Brewery called Hell Broth.

I need this to pop up in my city.

“Sending hundreds of our books to the government will cost us thousands of dollars and many hours of time, which cuts into our already limited resources for our mission to rescue rare and important literature,” Jenkins said. “But if we don’t send the books, the Copyright Office says they will fine us out of existence.”

Represented by the Institute for Justice, Valancourt has filed a lawsuit in federal court, arguing that the Copyright Office’s demand violates the publisher’s right to free speech and its right to “just compensation” for taken property.

Hopeful that this print-on-demand publisher of rare works, including forgotten queer literature, will be able to continue their mission.

Han, winner of the Man Booker international prize for her novel The Vegetarian, was named on Friday as the fifth writer to be selected for the Scottish artist Katie Paterson’s Future Library project. Starting in 2014, Paterson has asked a writer a year to contribute a book to her public artwork. Riffing on themes of imagination and time, each work has been seen only by its author and will be printed in 2114, when a patch of 1,000 Norwegian spruce trees planted in 2014 in the forest that surrounds Oslo will be cut down to provide the paper for the texts.

In the chronicles of unusual literary projects.